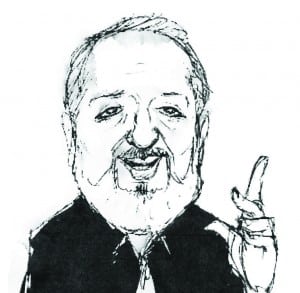 You’ve all heard the complaints and jokes about lawyers. They’re always saying “on the one hand, and on the other hand…” meaning that we (yes, I’m one of the clan, as most of you know) tend to equivocate at times, seeing multiple possibilities and avoid making absolute predictions simply because we know policy actions can often have unintended results.In our defense, I’d point out that we’re specifically trained this way. It’s our job to look at an issue from lots of different angles and see the many alternative outcomes that could arise from a given action. I’d argue this is a very smart thing to do, and there are too many folks these days, particularly politicians, who seem to intentionally do the opposite even when there’s a lot of documented indication that their favored course of action could result in the complete opposite of what they claim they want. A good example was highlighted last week at a conference I was invited to on Capitol Hill. It was billed as a “Media Solutions Summit.” It was described in the invitation as being “… designed to promote diversity of voices in media and look at challenges and opportunities for independent, women and minority owned networks and content creators.”

There’s certainly nothing wrong with that. I’m all for diversity of voices in media, and we all know that there are multiple challenges for independent, women and minority owned networks. But then I noticed that the “honorary hosts” of the event included folks like Senator Ed Markey and Senator Al Franken. Both honorable men even if they tend to overstate their cases at times and stray from fact-based arguments. But in Washington, particularly these days, that’s the norm!The reason I chose not to go, however, is because many of the “hosts” and speakers are the same folks who are constantly demanding special government benefits for anyone who can create yet more “competition” to the cable industry and the deconstruction of the MVPD “bundle.”

Now I can engage in reasoned debate about those subjects, but let’s stick with the specific problem this conference was supposed to address; the promotion of diversity. The traditional cable “bundle” not only promoted, but created diversity. That’s hard to dispute. BET wouldn’t have existed in the early days without the cross subsidy support given by the cable industry to get it going and include it in the bundle. The same thing is true for C-SPAN or multiple news outlets or “women’s channels” or, indeed, the entertainment channels that now number in the hundreds and compete for your attention. Many of the “honorary hosts” of that meeting are the same folks who insists on tilting the playing field to demand things like a la carte program sales or individual channel distribution via broadband. Now none of those things are inherently bad, but they most certainly are going to make it one heck of a lot harder for diverse, women’s, minority, or independent channels to survive, let alone thrive.According to most economists, those folks have failed to look “…on the other hand” at what their own one-sided policy demands are likely to result in; a diminution of major, successful independent channels, a consolidation of power in the few large, wealthy network operators, and the exact opposite of what they say they want. They may kill diversity. Until there’s a serious look at “both hands,” and recognition of the true potential impact of what they demand, a conference on Capitol Hill won’t solve anything.

(Steve Effros was President of CATA for 23 years and is now an advisor and consultant to the cable industry. His views do not necessarily reflect the views of Cablefax.)

Showtime is letting everyone sample the “Billions” Season 6 premiere, making the episode available for free on Showtime.com