In technology-driven industries, change is a constant. What varies is the pace. On the infrastructure side of the cable industry, certain key elements, such as fiber-optic nodes and QAM modulators, nonetheless have evolved over the years.

Early on, nodes were two-way activated, few with digital technology. Some nodes were segmented, enabling operators to partition homes into ever-smaller serving groups. While changing in these and other ways, optical nodes became ubiquitous fixtures in the HFC landscape. Even in the case of a fiber to the home or premises (FTTH/P) architecture, the node still is part of the physical plant; it just goes all the way to the end point. It continues to change in light of shifting demands and emerging opportunities, driven by the exponentially growing need for bandwidth.

The fiber-optic node acts as a fulcrum in the network, defining the point where optically transmitted signals are converted into electrical signals and distributed to varying numbers of end users. Flexible and resilient, optical nodes have acquired additional capabilities over time. Vital to distributing video and data signals, QAM modulators also have undergone change, especially in terms of their density. Fifteen years ago, one rack unit (RU) in a headend held a single QAM modulator, generating a single QAM channel. The number of channels then expanded from 8 to 16 to 48 to 72 to now several hundreds of QAM channels per RU.

During the past decade, some QAM modulators have been optimized for the network edge. Leveraging optical Gigabit Ethernet (GigE) inputs, Edge QAM modulators bearing their own IP addresses became elements in switched digital video (SDV), video on demand (VoD) and DOCSIS 3.0 bonded channel deployments. In converged scenarios, they repurposed capacity between video and data service delivery. Most recently, the industry’s converged cable access platform (CCAP) initiative has proposed combining the functions of the cable modem termination system (CMTS) and Edge QAM modulators into a single platform. While the originally conceived interface between CCAP’s packet and access shelf components was changed to simplify implementation for Edge QAM vendors, the overarching goal has remained to support significant growth in the number of deliverable QAM channels.

Node QAM technology combines a modular QAM platform with field-deployed optical nodes. It receives optically transported digital multiplexes (effectively via baseband digital) from the headend, and its output are these multiplexes, either modulated into RF directly downstream or first combined in the node with legacy RF signals. It continues to interest industry players. To some, the concept seems familiar, but questions remain about how it works and its compatibility with other industry initiatives. Those who see something recognizable in the Node QAM technology may be recalling other attempts to enhance the node’s capabilities. A decade ago, for instance, there appeared the prototype for a node CMTS. A more comparable implementation these days is a premises-based unit that can create lineups for the hospitality or multi-dwelling unit (MDU) markets.

There is a mistaken assumption that Node QAM technology flies in the face of the trend toward convergence, as embodied for instance in CCAP. Yet the Node QAM modules accept any mix of services. They can be paired with a headend-based universal-services multiplexer, which aggregates video and data services into MPEG-2 Multiple Program Transport Streams (MPTS) after all associated packet layer processing (encoding, encryption, ad insertion, fragmentation for adaptive streaming, etc.) is complete. The Node QAM module receives these digitally bundled multiplexes on wavelengths and then modulates them into RF, thus minimizing the distances over which the power-hungry RF signals are transported – very green! 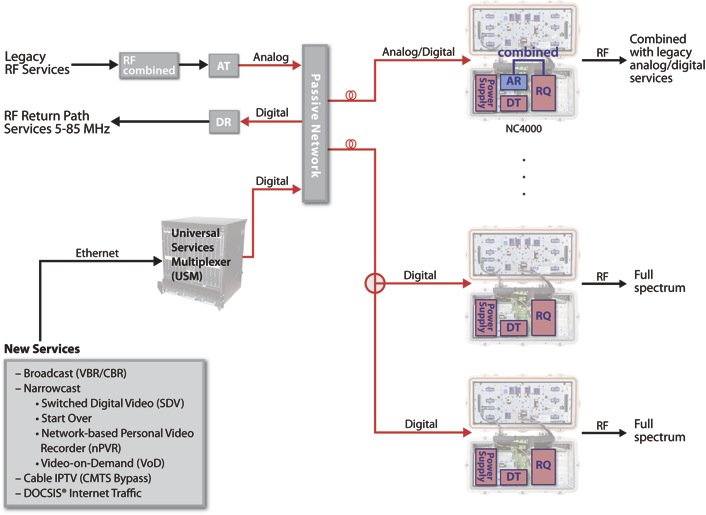 The Node QAM technology is designed to work within the CCAP provisioning and management paradigm. The bottom line is that it is immaterial to the specifications whether headend translation layer and QAM modulator functionalities are separated by a 2-mm circuit board or a 60-km span of fiber. Node QAM modules also meet the port density requirements set for both universal Edge QAMs and CCAP implementations, with the ability to deliver as many as 158 QAM channels per port.

What about another future on the drawing board, such as EPON Protocol over Coax (EPoC)? As that effort now moves into standards development, it is worth pointing out that the architects of CCAP crafted its operations support systems interface (OSSI) to incorporate EPON and other native IP technologies that might emerge; and as noted above, Node QAM technology is complementary to CCAP.

The Node QAM concept has resonated well among those responsible for deploying and maintaining HFC networks:

>> Maximum Channel Flexibility: A Node QAM solution provides a flexible means of using remote QAM resources both to accommodate the addition of new QAM channels beyond those already supported by legacy QAM modulators, deploying them to whatever degree and at whatever pace the operator chooses.  Operators are able to remotely assign channels to be modulated by Node QAMs, with complete flexibility to change those assignments over time.

>> Universal-Service Multiplexing: By definition, the use of Node QAMs means signals are multiplexed and delivered digitally from the headend. The multiplexing and configuration processes are able to operate across the entire downstream payload to dynamically support on-the-fly assignment of any mix of digital content to any given QAM channel at any given node, including broadcast, HDTV, SDV, VOD, nPVR, cable IPTV, digital voice and DOCSIS data streams.  The architecture enables all processes above the PHY layer to be performed independently so that every service stream multiplexed into the optical-distribution network is appropriately encoded, encrypted and otherwise groomed for the receiving device with all advertising content and interactive prompts and triggers embedded in the stream. In other words, the mechanics of a Node QAM is completely agnostic to the services running through it.

>> Wavelength Flexibility: At the same time, the headend multiplexing platform is able to assign and dynamically change assignments of wavelength resources on the fly in multiple ways such that:

•    Any given wavelength can be employed to deliver a complete or partial lineup of broadcast digital TV channels to multiple nodes;
•    Any given wavelength bearing narrowcast content can be shared across multiple nodes, allowing Node QAMs at each node to modulate only those streams that are targeted to subscribers in the node service area;
•    The full complement of broadcast and narrowcast signals to be supported by Node QAMs at any given time can be provisioned over a single wavelength to each node.

Such dynamic provisioning flexibility enables the operator to incrementally utilize Node QAM resources cost-effectively without having to forecast in advance what the eventual mix of streams will be at any given node or on any given QAM channel. There’s no need to pre-wire or alter wiring of the RF combining network with every change in the service mix, and the mix can be shaped dynamically and expanded over time on a neighborhood-by-neighborhood basis.

This flexibility means operators can put Node QAM resources to use incrementally at whatever pace suits their needs. For example, an operator may want to dedicate a block of spectrum capable of delivering 100 narrowcast or SDV streams to Node QAMs but, at the outset, may only need to use a single QAM channel to carry 10 streams to any given node. In this case, all 100 streams could be delivered over a single wavelength to 10 different nodes, where each Node QAM would be assigned to modulate whichever group of 10 streams is targeted to its service area. In the future, as more streams are dedicated to each node within the original block and more blocks are added, wavelength loading and QAM channel assignments for Node QAM resources can be orchestrated to precisely accord with the operator’s strategic migration goals.

>> Exploiting Digital Optics: Implementation of digital optical transmission is fundamental to the flexibility made possible by the Node QAM architecture insofar as all wavelength assignments can be implemented without requiring resetting of power levels and end-to-end balancing for changes in distances that are required with analog optics. While operators will continue to employ analog transmission to deliver channels modulated by legacy QAMs modulators, all streams assigned to Node QAMs will be delivered via low-cost, small-form-factor pluggable transmitters (SFPs/XFPs).

Use of digital transmitters in the downstream, mirroring the digitization of upstream optical signals, also will serve operators well in their efforts to maximize bandwidth over existing cable plant. Any payload delivered digitally to the node will avoid the losses incurred through traditional RF combining and optoelectronic conversions resulting in signal-to-noise output at the node that is on par with today’s headend outputs with attendant improvements in harmonics and noise floor performance. These gains open the possibility of expanding available bandwidth on the coax by going to higher orders of modulation above 256-QAM on the Node QAM-modulated channels.

>> Overcoming Space and Power Consumption Costs: With all the flexibility that comes with use of the Node QAM architecture operators also achieve another key goal in the migration to higher QAM channel counts, which is to reduce power costs and conserve space in headends and hubs. Capping QAM modulator rack space consumption has become an urgent priority in many cable facilities. While Node QAMs will add incrementally to power consumption at the nodes, the option offers a net power savings compared to the costs associated with supporting rack-mount QAM modulators and analog optics, maintaining temperature stability and providing backup power in headends and hubs.

From the end-to-end infrastructure perspective, the picture remains the same. The operator that deploys Node QAMs is still delivering RF to the customer. The only question is where the content is modulated.

What the Node QAM does is extend the physical boundary of the headend. It simply lets IP switching take that point a little further, for however many QAM channels are needed, and with considerable benefits in the areas of signal integrity, operational constraints, spectral efficiency and services flexibility. Bottom line, the resulting distributed digital HFC architecture is the only solution that provides a cost-effective evolutionary path for cable systems to keep up with the “Y” generation’s appetite for bandwidth.