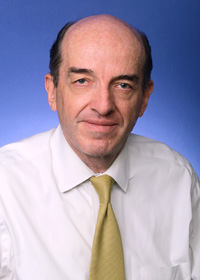 As far as government jobs go, the FCC is the best, former Commissioner Michael Copps told us. Nonetheless, life after the agency is “good…I am enjoying it,” nearly a year after leaving the agency, said Copps in an interview. He joked that part of it is because he doesn’t have to deal with hundreds of regulatory and technical issues any more. “Those are important jobs for the commissioners.”

When he was with the Commission, Copps perhaps came as close to being a media watchdog as a commissioner possibly can. Indeed, an editorial from the Seattle Times called him “Mr. Public Interest.” Now he’s the real deal. As senior advisor for nonprofit Common Cause’s Media and Democracy Reform Initiative, Copps has maintained his commitment to an inclusive, informative media landscape. He also sits on boards of Free Press and Public Knowledge.
“I want to keep my interest in media issues…my concerns about excessive consolidation in traditional media and new media,” Copps said. It’s important to have constant dialogues on issues concerning the media and “I am happy to be involved.” Copps, who served two terms at the FCC, has been a strong voice in opposition of consolidation in the media and he notably dissented in the Comcast-NBCUniversal merger. He has also been a consistent proponent for localism in programming and diversity in media ownership. The election showed that the voice of the country seems to be launching in a different direction, Copps said. The voice of diversity is becoming clearer. Most importantly, now it’s time to deliver, he said at a recent NAMIC event honoring Commissioner Mignon Clyburn.
Meanwhile, the FCC is reportedly considering lifting the ban on cross media ownership soon. If that happens, “I will be distressed” and investigative journalism will suffer, Copps said, declaring that reporters will be searching for jobs rather than stories. Thorough reporting has been sacrificed as news organizations struggle to deliver greater returns to shareholders, according to Copps. He had opposed loosening the rules in 2003 and 2007.
Copps also shed some lights on retrans. “It’s a difficult subject,” he acknowledged. “The lack of clarity about the authority of the Commission has always been a concern at the agency and elsewhere,” he said. The bottom line is, the focus of the FCC ought to be on consumers and making sure the infrastructure is serving consumers, he said.

Altice USA CFO Michael Grau is skeptical that regional sports networks will be able to achieve the same economics in the streaming ecosystem as the ones they have now.