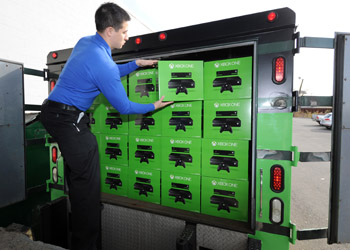 The Xbox One launch in New York City

If you’re a child of the’80s, you probably remember those “Choose Your Own Adventure” books in which the reader became the protagonist and made choices affecting the plot. You know, slay the dragon or tiptoe past him. It sounds like Xbox is hoping to re-awaken that dragon, bringing the model into the 21st Century.

At RealScreen Summit last week, Ari Mark let a few tiny details slip. The AMC Networks vet was on his 2nd day of the job as Xbox Entertainment Studios head of unscripted programming. So admittedly, all plans are in early stages, but interactivity will be key for Xbox productions.

“Every single piece of development coming in is tied with interactive [staff at Xbox],” Mark explained. (Fun behind-the-scenes reveal: those interactive folks don’t even have desks; they lounge in easy chairs). He said one thing in the works now is a short film that kind of uses the “choose your own adventure” concept. If it works, long form would be next. “It’s a bit of a testing ground,” he said.

As a game console turned entertainment hub, Xbox believes it can lead the way in interactive television. But one of the challenges will be getting producers to think about coming to the platform with their content. Take NBC’s “The Million Second Quiz,” a game show that aired in Sept following a group of contestants who competed for $2 million in a quiz competition that spanned 1 million seconds (more than 11 days). The show included a play-at-home app.  It was hyped as a national event, but ratings were a disappointment.

“That would have been quite simply a better show on Xbox,” Mark said. “The muscle is still in the network space, but I think that’s transitioning. We would have been able to support the technology for that kind of interactivity.”

One of the advantages Xbox and others in the digital space have is flexibility. “It’s storytelling on a different platform. You’re not handcuffed by a 30-minute or 60-minute timeslot. You can just try stuff out. It’s the wild West,” said Michael Klein, EVP of programming and content strategy for Condé Nast Entertainment Group’s digital channels. Condé Nast launched its digital channel business about eight months ago, with seven channels all built around the company’s established brands, such as Vogue and GQ.

At AMC Nets, Mark developed unscripted shows such as “Comic Book Men” and “Talking Dead.” At Xbox, he gets to try a little of everything. “We can sort of steal from traditional TV [and the web],” he said. “We have the ability to throw out the rules and not worry too much about the clock or format.” Xbox is already working on some unscripted series. Last year, it announced a deal with Lightbox for an original doc series about excavation of a landfill where Atari is rumored to have dumped millions of unsold copies of the E.T. The Extra-Terrestrial video game in 1983. It will debut later this year, exclusively on Xbox 360 and Xbox One.

As for reach, there is a built-in audience. Xbox 360 console sales have surpassed 76 million. That’s not even taking into account the new Xbox One households. Yes, Xbox Studios will be catering to 18- to 34-year-old men, but Mark cautioned that for every teen with a Xbox, there’s a whole family watching content on the console. “The sweet spot [is young men], but we want to be broad. We have the ability to be broad.”