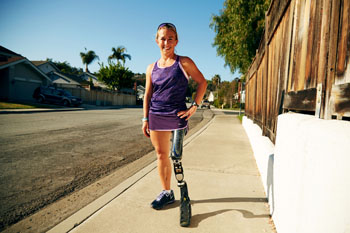 Athlete Sarah Reinertsen, featured in "I am Unstoppable."

Weather Channel-owner The Weather Company has something brewing, and there doesn’t seem to be a dark cloud in sight. Web series “I am Unstoppable,” scheduled to debut Tuesday on Weather.com, is part of its new fully immersive HD experience called Weather Films—which the programmer says is, “the largest investment in digital video that the weather company has ever made.” The series tells the story of six outdoor athletes who battle the elements, weathering their personal storms. It fits with Weather.com’s mission to go beyond just reporting the weather, and give its audience more insight to the world around them. We spoke to Editor-in-Chief and Series Producer Neil Katz about the project and its life beyond the web.

Why did the Weather decide to create Weather Films?

We took an opportunity this year to really think through how we could redefine how people think about content on the Weather Channel digitally, and Weather Films is our big HD video investment this year to really create beautiful, filmic, editorially strong stories for the web and for TV. And we chose to set it apart a little bit by calling it Weather Films so that we could create a unique experience. It’s all really rich and immersive and felt unique from what people are used to everyday with checking the forecast on the site. We really wanted to build something new and big to let people know that we’re doing something different at the Weather Channel this year.

What are some of the expectations you have for the web series?

Our biggest expectation is that people love it. We also want to create something that we are editorially very proud of, and bring big filmmaking and great editorial to Weather.com. And we’re proud of the fact that the best of these Weather Films will be picked up for two hours of prime-time television in December. I think we’re probably one of the only media companies where things being made on digital are also going to TV. Usually it’s the other way around.

So some of the web content will shift to linear TV?

The web versions are running on TV every time we launch a series, so they’ll run for a week on TV during our news block, but in addition to that, we’re also launching two hours of prime-time TV in December inspired by the Weather Films we’re doing, but these will be new productions, bigger budgets, longer stories, for the bigger screen.

Was it a difficult process selecting the 6 athletes for this series?

What do you hope the audience will get out of it?

One of the people we focused on, Spencer West, who lost his legs early in childhood and recently climbed Kilamanjaro anyway… he says in the piece ‘I didn’t know if I would make it, but I knew I had to try, and that’s what matters.’ When you hear him tell it you kind of come to tears when you feel the emotion in his voice and you realize what this man’s done. I think that’s the message of the series, if you dig deep inside of yourself, you can overcome, and that’s what the human spirit is about.

Will these films appear on any other websites?

From the first window, the first run, they are exclusive to Weather.com and the Weather Channel and television. After that, we’re doing Vimeo and Youtube and we have some international partnerships set up already—ones with The Guardian to distribute Weather Films in the UK and we’re hoping that list grows.