In general, TV viewers want series to end with an action-filled bang, a plot twist or two or at least a sentimental gift, a nod to viewers who’ve been loyal, like the coda affixed to “Six Feet Under.”

Nope. Not here. No signature moments.

As this blog and many others have said, if thrills and typical Hollywood devices are what you seek, the somewhat cerebral, sometimes-plodding “Mad Men” probably is not your show. What creator Matt Weiner did in the finale was to continue telling the series’ story with consistency, interweaving themes in the finale that he presented at the series’ outset. As you know, discussing Mad Men’s themes are this blog’s main course–the reason it exists. [The episode’s main issues will be examined following the next section.]

In an interview with The NY Times, Weiner said his benchmark for the ending was the abrupt finale of “The Sopranos,” an episode people still debate today, 8 years after it premiered.

In the case of The Sopranos, creator and former Weiner boss David Chase intended to leave plenty of room plot-wise so that a feature film could follow. With the untimely death of James Gandolfini 3 years ago in Rome, though, that scenario’s possibilities seemed to have dimmed considerably.

Like his mentor Chase, Weiner ended his series with room to maneuver his characters.  For example, he could decide to spin off the series without Don Draper, looking at the lives of other characters (“Better Call Pete,” Jon Hamm joked in January at TCA).

All this is speculation; Chase has vowed to forego a return to Mad Men, either via feature film or TV spinoff. Despite his tremendous success, though, Weiner is a human being and subject to a change of heart. He vowed, for example, to avoid a JFK assassination episode on Mad Men. We’re glad he rethought that promise.

The Themes: Is Everybody Happy?

While it was touched on repeatedly during earlier seasons, the empty feeling that many of the Mad Men characters experienced was a central theme in the last seven episodes.

“In all of television history, has there ever been a musical cue more inevitable than Peggy Lee’s “Is That All There Is?” appearing in an episode of Mad Men? It’s hard to think of a song that better captures the dreamlike and quintessentially ’60s malaise that’s hung like a mist over the past seven seasons…. It’s so perfectly Mad Men that it’s almost hard to believe it hasn’t been used on the show before (Matthew Weiner once toyed with the idea of making it the theme song), in large part because it’s one of those songs that now sounds a lot older than it actually is.” 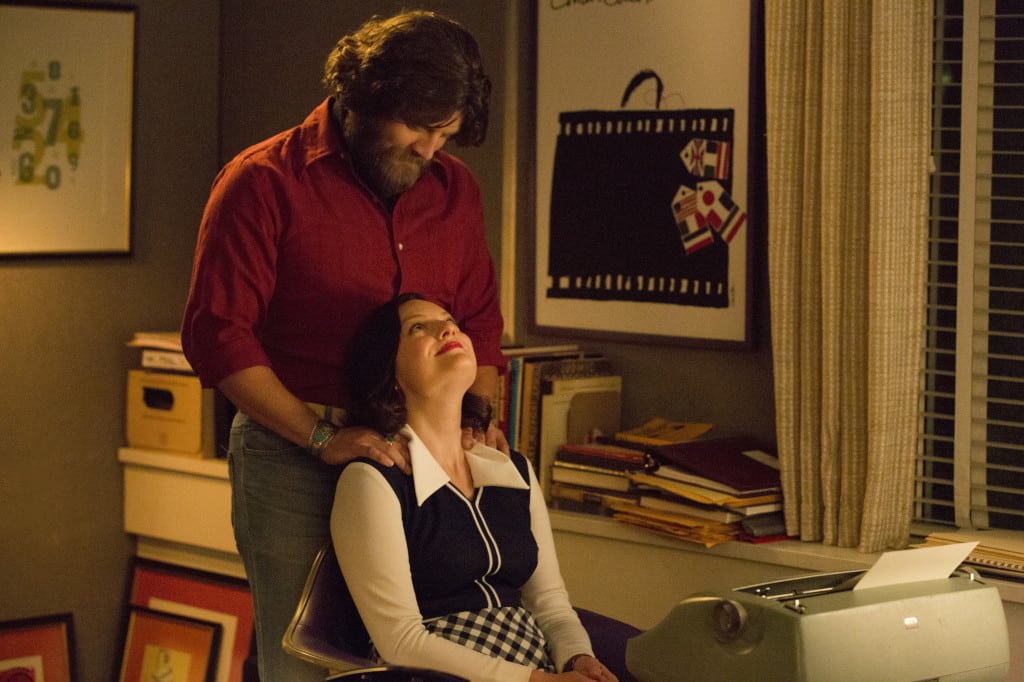 Those lyrics lead us to wonder whether or not any of the Mad Men characters will be happy. And to get even deeper, what is happiness?

The finale also touched on the motifs of family and motherhood. A Mad Men word about family: Nearly 6 years after leaving SC as head of accounts, Duck Phillips resurfaces in 1968 as a headhunter. And he’s sober. The key to his resuscitation, he tells Pete, is the support of his family. Judging by his actions in the finale, Pete listened.

As we saw, Don is seeking his to find family in California and NY and is rebuffed on both coasts. When he reaches out to help Stephanie Horton, Anna Draper’s niece, by offering money and moral support, she retorts, ‘Why are you trying to help? You’re not even part of this family.’ Ouch.

And when Don offers to comfort Betty in her bout with lung cancer by coming immediately to NY to see her and be near his children, both she and Sally tell him no deal. Betty wants things to remain as normal as possible while she begins her inevitable downward spiral. For her, normalcy is having Don visit his children infrequently. Sally, my favorite voice of truth on this series, pointedly tells her dad not to interject himself by taking Bobby and little Gene to live with him. The boys need to remain in Henry’s house, sleep in their own beds and go to their own school, she says, speaking from experience. Ouch again.

Roger, too, is seeking a family. Estranged from his first and second wives, his daughter and grandchild, he rejiggers his estate to leave a sizeable sum to Kevin Harris, the lovechild he and Joan made in a moment of fear and passion. Interesting and fitting for this series that little Kevin has been told that his father is Greg Harris, M.D., a war hero who never made it back from Vietnam.

In another move toward finding domestic bliss, Roger agrees to marry Marie, who, like her daughter Megan Calvet Draper, knows exactly the type of man she’s marrying. Don and Megan didn’t work for various reasons, mostly because Don often was emotionally unavailable, broke his promises to Megan and was carrying on with Mrs. Sylvia Rosen. Here’s hope that the older, more experienced Marie will give as good as she gets from Roger and that Roger, after numerous affairs and a few failed marriages, finally will be faithful. Nah, probably not.

The finale continued to bring acting kudos to January Jones in her role as Betty. The last thing a dying character needs to be is maudlin. Jones, who’s been whacked by many, including your blogger, for being wooden and stone cold throughout the series, has found a perfect tone in these final episodes.

Betty’s insistence that her and Don’s sons, Bobby and little Gene, be raised in an environment with a woman in it, is interesting. Her solution has the boys living with her brother and sister-in law. Children need a mother, or at least a woman standing in for their mother, she insists.

Similarly, Stephanie, Anna Draper’s niece, who has given up her child, is moved to tears in group therapy when a member of the group says she feels sadness when thinking of Stephanie’s child, who will go through life waiting at the door for its mother to come home.

Weiner seems to be commenting on the importance of motherhood, which, of course, is underlined by Betty’s situation. She’ll be leaving her young children behind shortly. Similarly, Don, as we know, never knew his mother, a prostitute who died in childbirth. We know well the emotional baggage his childhood left.

While we didn’t see or hear much about the upbringing of Pete and Peggy, we met their mothers later in life and both were doozies.

And Roger, seemingly a man of the world who doesn’t need mothering, ends up not with another young slip of a girl, but the older Marie, a mother of two. In fact, when given the choice of an older, motherly secretary Caroline (Beth Hall) and the younger, leggy Meredith (Stephanie Drake), he opts for Caroline. OK, maybe that’s a stretch. Meredith was Don’s secretary and with Don AWOL, McCann, not known for its fair treatment of female employees, set her adrift.

Best Moments were Phoners: The night’s best moments were phone calls: Don’s teary exchange with an equally teary Betty; Sally telling her father in no uncertain terms how things will be after Betty passes; and, on a more upbeat note, Peggy’s phoner with Stan, where they reveal their love for each other, thanks to good writing and acting.

Stan and Peggy: Yes, we called this romance in our May 1 blog. In truth, though, all we said was that Stan was crazy about Peggy. We tempered that thought with verbiage about Stan’s overactive hormones making it difficult to gauge whether he’s in love or lust.

Recall his indiscriminate coitus with Frank Gleason’s underage daughter in the office, just hours after her father was buried. Then there was his dalliance with artist Pima Ryan (Mimi Rogers), who also propositioned Peggy.

And since we’re going down memory lane, how about the time a less hirsute Stan tried to seduce Peggy, offering his sexual services to her as a way to reduce stress before Peggy’s big Playtex presentation (sex as a stress buster, how original, Stan). Then, later in the series, when he tried to play one of the oldest cards in the book, appealing to her with the line that he “needed” sex with her because he was grieving for his cousin, whom we met at the Zou Bisou party, had died in Vietnam (come on, Stan, even Roger wouldn’t stoop that low…well, yeah, he probably would). Of course, that scene ended with Stan observing that Peggy has great hindquarters.

Not that Peggy is a sexual innocent. She’s had her share of coitus, some of it innocent, some of it not. Remember her bedding married guy and boss Teddy Chaogh? Then there was her penchant for duck, er Duck (was he married when they cavorted?). And there was Pete, of course. Oh, and recall how she promised Stan that a trip to her place to help her catch a mouse would be “worth your time.”

Still, I am enjoying the image of these colleagues, one tightly wound the other a free spirit, getting busy underneath the still unexplained poster of Moshe Dayan in Rizzo’s bedroom. 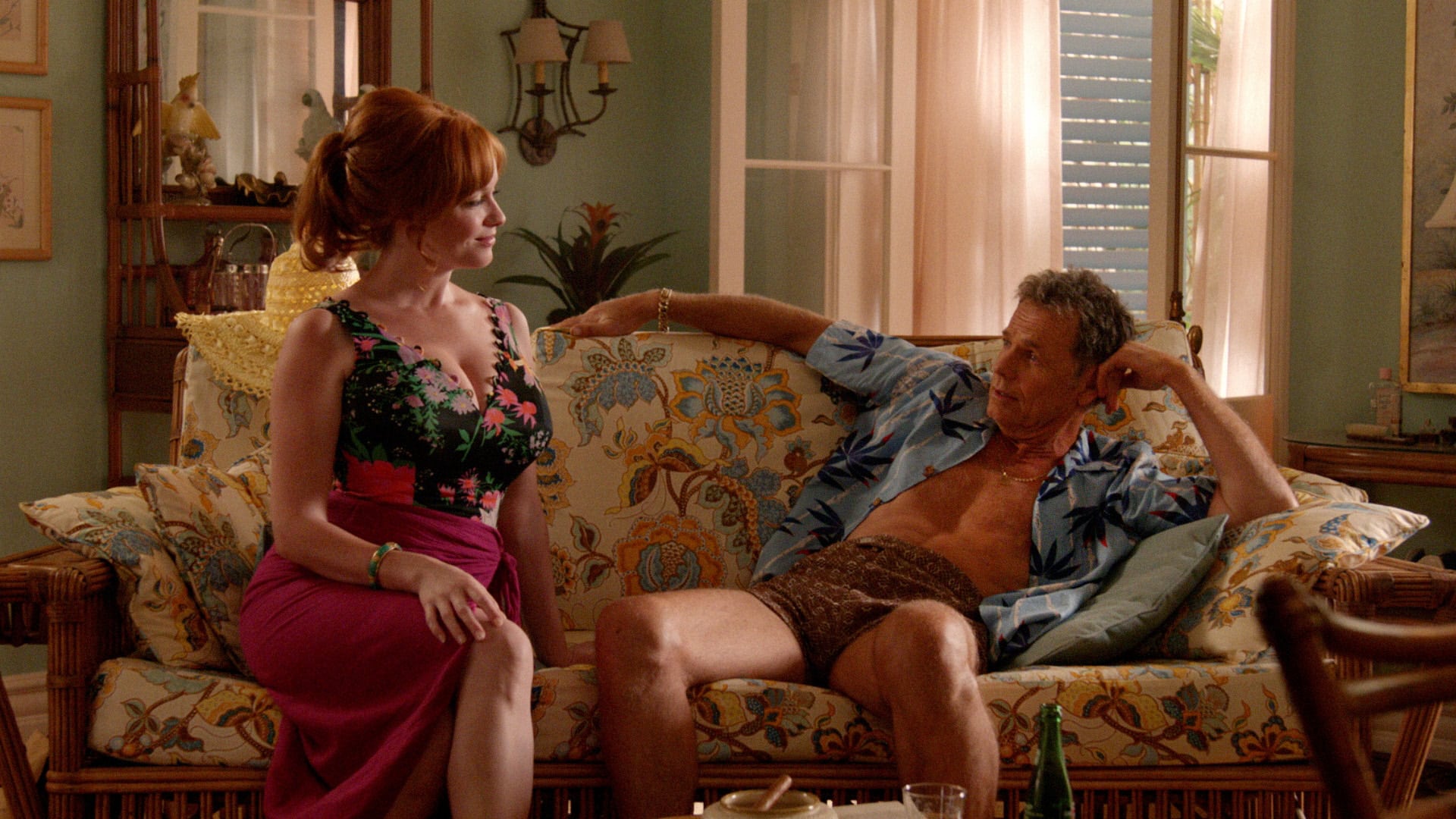 Joan’s Arc: Weiner piled on Joan a bit, financially, at least. We knew she had a way with figures (no, seriously); plenty of accountant types, including Lane Pryce, told her so. Still, with Kevin’s future secure, thanks to his secret bio dad Roger, she doesn’t need to work. It would have made it that much easier for her to forego the chance to be a producer and opt for a life of decadence and happiness with Richard (Jeff Greenwood).

Obviously she needs to prove, to herself mostly, that Joan Holloway-Harris can build a business. In addition, even though her SC partnership was unusually acquired, she’s bright and capable and far more than a gorgeous woman (are you listening, Sally Draper?). She, however, chooses to do throw herself into starting a business, costing her the handsome and wealthy Richard, who was willing to make a life for her and Kevin had she not opted for that course.

The storyline, besides showing Joan picking business over family (while a man was opting for a family over business), also demonstrates the seismic shift in attitude toward women and work that has occurred since the series’ story began, in 1960. While attitudes toward like McCann’s still exist, subjugating women to a low status, a woman choosing to start a business is thinkable–while it was nearly unthinkable when the series started. [Note: Enjoy going back and watching older eps; they definitely show a progression on many levels and will bring you enjoyment for many years.]

Will Joan eventually stop to enjoy herself and her son and realize, as Peggy Olson said once, “You’re filthy rich, you don’t have to do anything you don’t want to do”? My other concern about Joan is her ability to run a business. Ironically I am concerned about her strength with figures. Recall how coldly and greedily she kicked Don to the curb a few seasons back when she realized he was putting her financial future in jeopardy? I have been unable to forget that and it fuels my concern over how she will run a business. A microcosm: “You’re ruining my life!” she screamed at her babysitter. Really?

Thank You: A word of thanks to you, the reader. This blog began years ago and has continued to this day due to your loyalty and encouragement. Thanks, too, to CableFAX and Kaylee Hultgren, whose gentle editing has made the last few years so enjoyable. We might write a few more Mad Men blogs soon as we continue to digest things, so if you have comments, topics or ideas you’d like us to address, please send them to me below.

It’s been a pleasure.