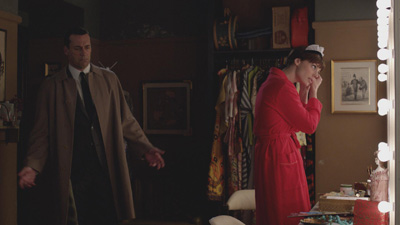 The social media universe found Sunday’s episode of “Mad Men” its favorite so far of this penultimate season. Many tweeters appreciated that there was relatively more action than in the previous three episodes, which they complained were slow. [Should you want to witness genuinely slow pacing, catch Sundance Channel’s first original, “Rectify.” I’m not saying Rectify isn’t a good series, it is, in part because it features Abigail Spencer, who played Don’s illicit love Suzanne Farrell in season 4. Still, after watching Rectify, you’re unlikely to complain about "Mad Men’s" lack of speed.]

A New Dawn: Finally we get insight into non-executive life at SCDP and a bit of material about race, courtesy of Don’s Dawn. In keeping with the underlying theme of this series, things are not always what they appear to be. Despite the ultra -modern and brightly lit SCDP offices, even the seemingly happy ‘little people’ are miserable (we already knew Don and Roger, although outwardly content, are unhappy).
As we heard during the episode, things are rocky in Dawn’s orbit. At SCDP women cry in the ladies room, men bawl in the stairwell, and what about that poor man [Lane Pryce] who hanged himself in his office, Dawn tells her friend. More than that, “it sounds like New Year’s eve” when they empty the trash cans due to the abundance of liquor bottles, Dawn says in evocative language. And Dawn can’t go out for lunch since Mr. Draper “always needs me.” Then there’s Joan, overseeing the secretarial pool with all the warmth of a mother who eats her young. Still, Dawn vows to be more like Joan as she attempts to survive another day in the jungle that is SCDP.
Joan’s Arc: Related to Dawn’s suffering, Joan, who has become a partner through ‘an arrangement’ that can’t be discussed in a family setting, also is massively unhappy, we learned this week. She’s still treated like a secretary after 15 years at SCDP, she says, although she’s actually instrumental to the company’s operation, as we learned two seasons ago. Still, there’s a dichotomy. To the world—her mother, Gail Holloway, and her out-of-town friend Kate—Joan’s doing great. She’s an executive on Madison Ave and makes a lot of money. “You have it for the taking,” Kate tells Joan, who doesn’t seem to think so. This likely is Weiner reminding us that women, despite making significant progress over the course of the series’ six seasons, still have a long way to go. It also seems to be a comment on the risks of making secret arrangements in business. While Joan’s secret deal worked out better for her than Heinz Ketchup’s secret Project K did for SCDP, it’s far from ideal.
In a related plot line, the whole Harry Crane feud with Joan stems from the secret arrangement but really is broader. At its roots, the feud shows the start of gender disputes in business in the late 60s, when men and women, for the first time, are on somewhat equal footing. It’s a gender issue in part. Harry is mad that Joan, a woman, is a partner and he’s not.
Not Talking to You: We commented on the nastiness shown by older, established people to younger folks last week. Again, this week there were a couple of instances of younger people being ignored, and rudely, by their elders. First we had Stan being cut off in mid-sentence by Ketchup chief Timmy during the creative presentation at the Roosevelt Hotel. Next Don totally ignores an excellent attempt at brown-nosing by eager beaver Bob Benson as Draper heads into the not-so-secret room to work on Project K, and smoke grass with Stan. Gosh, would we ever suspect Don of smoking grass on the clock? And would an establishment guy like Don oppose the Vietnam War?
Burt Digs It: Apparently we were wrong a few weeks back when we speculated that Burt Cooper still lacks an office. Clearly, the scene with Roger, Burt and Harry Crane took place in Burt’s occidental-themed office.
House Keeping: Your blogger will be on vacation for the next two weeks and unable, probably, to see Mad Men. We’ll endeavor to be catch up quickly upon returning.

Comments: Please, let us know your thoughts. We welcome your insight. Thank you for reading.

NTCA-The Rural Broadband Association heralded back in the era of live events Monday with the general session kick-off of its Fall Conference and Expo.