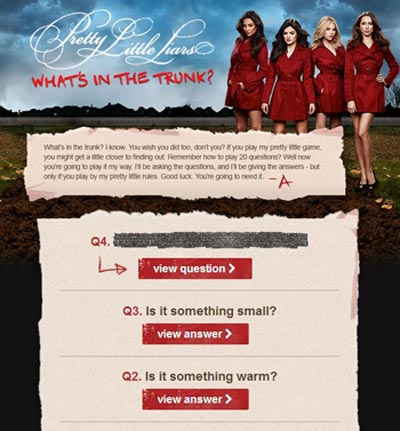 To drum up excitement for the Season 4 premiere, ABC Family launched
a Facebook app themed to a huge cliffhanger from the spring finale.
—

The Season 4 premiere of ABC Family’s “Pretty Little Liars” Tuesday night went down as the most-tweeted season premiere in TV history with nearly 1.3mlm tweets. What’s more, the series now accounts for the top 4 most-tweeted TV telecasts of all time. While A’s identity might be a mystery, it’s clear that ABC Family has cracked the case for social media engagement. VP, Marketing Danielle Mullin talks with us about just how the network keeps the conversation going online.

There is a presumption that "Pretty Little Liars" does so well on social because of the young-skewing audience. How much of that is a factor?
The social media success of "Pretty Little Liars" really starts with great storytelling. The series is a compelling mystery with plot twists & turns around every corner, and the perfect mix of romance, drama and suspense.  Once you have those ingredients in place, the social media space provides a fantastic forum for connecting with viewers across all demos to amplify the buzz. You’re right—"Pretty Little Liars" is a huge success with the younger demos. The spring finale was the #1 telecast on all of TV with Females 12-34 and Teens 12-17, but it was also the #1 cable telecast of the night with   W18-34 and W18-49.
ABC Family doesn’t seem to be afraid to let a spoiler out in a hashtag. Do you have to balance that with West Coast viewers and DVR watchers?
Our West Coast viewers are trained well—we often see them signing off Twitter when Pretty Little Liars airs on the East Coast so they don’t see any spoilers. One brilliant PLL fan even created a Google Chrome app that blocks tweets with certain key words in them because she didn’t want to see spoilers. But in reality, Twitter is the new watercooler. The conversation around an exciting episode of television now takes place live, during the actual broadcast, and viewers want to be a part of that collective conversation. East Coast viewers have their fun, and then West Coast viewers jump back on Twitter a few hours later. Fear of missing out—can be a great motivator.
You used social media to reveal PLL spinoff “Ravenswood.” I imagine we’ll see it used more?
Without a doubt. As marketers, social media platforms provide us with an incredible toolbox that allows us to take a great piece of programming and spread it to the masses in a way that can be much more impactful than straight advertising. But brands can’t just define a social media strategy and then cross it off the “to-do” list. To maximize the value of social media platforms, we have to continue to be innovative in the way we engage with consumers across these platforms.
When announcing "Ravenswood," we wanted to use the equity of "Pretty Little Liars" in the social media space to help drive early buzz and build a base of superfans.  We did that by turning the traditional press release on its head.  In fact, we didn’t use a press release to make our announcement—instead, we took the information straight to the fans and posted a different cryptic clue on each of the PLL digital platforms—Facebook, Twitter, Tumblr, Pinterest, Get Glue, Instagram, YouTube and abcfamily.com.  As a result, "Ravenswood" was a trending topic on Twitter for more than two hours, and all of the social media excitement around the announcement generated over 369 million impressions.
What are the benefits of having a socially engaged fan base?
Platforms like Facebook and Twitter allow us to talk to our fans as if they were our friends. We are creating one-on-one relationships with our fans, and building the kind of loyalty that is really priceless. We can remind our fans to tune-in, reward them with inside information, and share exclusive content that we know they will in turn share with their friends—essentially doing our marketing for us.  And that’s really the ultimate goal—we want to use these platforms to amplify the buzz and drive viral conversation around our shows to increase awareness and ultimately drive tune-in.
Is it something that you can use with advertisers?
Absolutely—we’d had a lot of success in creating sponsored engagement activities that live in the social media space and on Abcfamily.com. Recently, to generate excitement for the spring finale, we built the Pretty Little Liars Finale Party App that lived on the PLL Facebook page—the experience was sponsored by an advertiser. Fans could live chat with Janel Parrish, who plays Mona on the show, and they could also download printable party decorations, enter to win prizes and get exclusive content from the next season. The spring finale became the #1 “most social” series episode on record during its airtime, according to SocialGuide, and the first series episode to amass over one million total airtime tweets in television history. By tying in to the equity of the "Pretty Little Liars" in the social space, the advertiser got the benefit of exposure to a highly engaged, highly social audience who is then more likely to talk about the advertiser across their own social platforms.