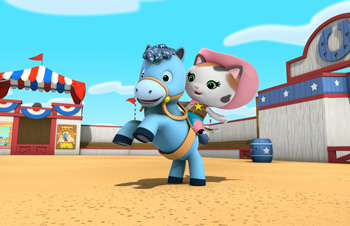 If there’s a demo that likes to watch episodes over and over, it’s kids. So Disney Junior’s plans to release the first nine episodes of its new western for preschoolers, “Sheriff Callie’s Wild West,” exclusively on its authenticated Watch Disney Junior product far ahead of the series’ linear premiere in 2014, makes a lot of sense.

The idea is to reach kids on the platforms they’re using today, namely smartphones and tablets, and build anticipation before the animated series’ TV debut. Network research shows that tablet use is growing fast; more than half of households with children now own a tablet, compared to 40% in 2012.
Nancy Kanter, evp, original programming and gm, Disney Junior Worldwide, isn’t worried about the linear debut losing viewership. She’s seen an increase in viewing, in fact. “With our audience, who are always happy to watch and re-watch series and favorite episodes we think these two platforms—linear and digital—will be highly complementary,” she said.
Will the network continue this app-first strategy with other shows? “We think we will learn a lot from this first launch on our Watch Disney Junior App,” she said. “We’ll be able to quickly tell how engaged our audience is in getting this content on this platform, and our expectations are that they will be highly motivated to watch here.” Families with young children adopt to these new technologies first and appreciate the flexibility they afford. “Time and experience will guide us in making strategic decisions going forward about how to continue to embrace these types of devices and platforms,” she said.