In today’s world, consumers have an ever-growing variety of options for viewing sports, news and entertainment programs thanks to the proliferation of online and mobile applications and the entrance of new content developers. Yet, while the number of competitors is on the rise, the talent needed to drive the latest technologies and digital content is extremely limited. As a result, the Cable and Telecommunications Human Resources Association’s (CTHRA’s) 2014 Compensation Surveys determined that the law of supply and demand is dominating compensation in our industry as salaries for technology (see Table 1) and digital media positions rose well above the national average in 2014. In addition, compensation soared for many sales positions and executives, particularly among MSOs, as they continued to receive very large incentive grants.

“Both the MSO and programmer community are competing with Apple, Google, Facebook and Amazon for critical talent in the technology and digital space,” said Karen Baker, vice president of compensation, NED, for Comcast Cable. “We need to adopt progressive pay practices for those employee populations — what may be good for some parts of the business will not work in Silicon Valley. We need to change and adapt to successfully compete.”

“Media companies are scrambling to simply keep up with the constantly evolving digital space, and all want the company with the next big digital breakthrough. As a result, premier digital talent is in high demand,” said Joanne O’Brien, senior vice president of HR for NBC News Group. Average base salaries for these jobs rose at rates from twice to five times the national average, with increases ranging from 6% for director of digital media marketing to 15% for vice president of digital media marketing (see Table 2). 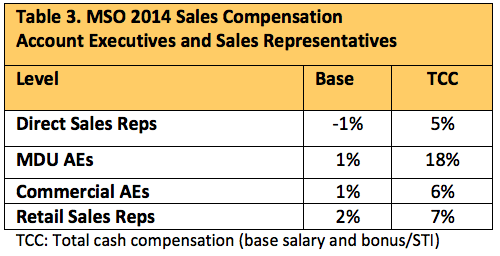 “The strong year-over-year growth in total cash compensation for sales employees is an important finding,” said Susanna Chan, senior director of compensation and talent planning for Charter Communications. “This growth is primarily driven by the increase in incentive compensation, so we will be doing more work and analysis in our sales commissions plans in particular.”

Programmers also experienced robust compensation growth for most ad sales positions in 2014. Although base salary growth and target total cash compensation was more modest, incentives surged in nearly all sales categories. EVPs topped the sales ranks with actual TCC rising by 25%. Other impressive gains came at the SVP and VP levels, with actual TCC escalating by 14% and 10% respectively (see Table 4). 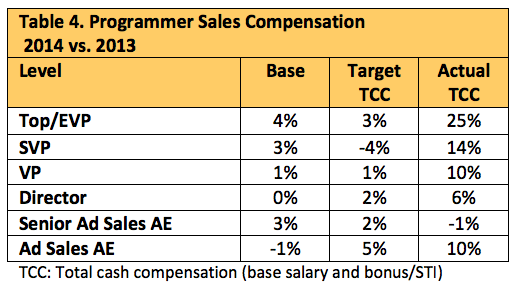 “2014 was a really good sales year,” Hali Croner, chief executive officer of The Croner Company, said. “For nearly all sales positions surveyed, actual compensation exceeded target.” This aggressive growth may have been due to robust sales goals set in 2013.

MSOs and Programmers Increase Base Salaries
Among cable operators, base salaries for non-sales positions grew in all job categories, with increases ranging from 1% for salaried employees to 4% for management. Management and sales experienced robust gains in Total Direct Compensation (TDC), which includes base salary, bonus and long-term incentives (LTIs). TDC rose 9% for management and a hefty 13% for sales (see Table 5). For management, these gains were primarily due to large LTIs, while the increases for sales accrued from a combination of strong bonuses or short-term incentives (STIs) — driven by robust sales — and LTIs. 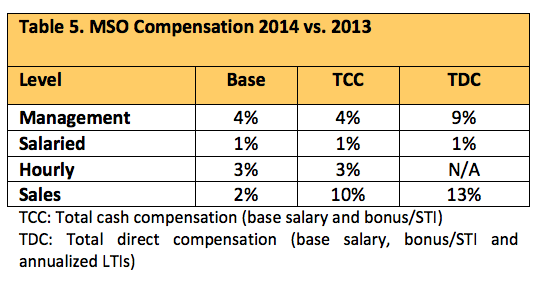 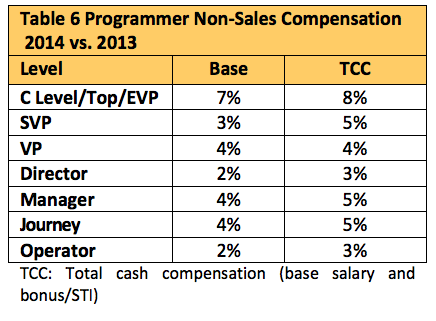 Incentives Popular, Full-Value Shares Prevail
Incentives continue to be important components of compensation in the cable industry, reflecting employers’ emphasis on retention. Long-term incentives, such as stock options, shares and long-term cash awards, are also valuable tools for companies across the industry. LTIs are linked to a company’s financial performance and value creation over multiple years.

“We find the long-term incentive plan section of CTHRA’s Compensation Survey to be very valuable to understanding eligibility and granting practices,” said O’Brien.

Some 75% of MSO participants offer LTIs with most awards going to directors and above, although 16% also offer LTIs to managers. Especially noteworthy is that 75% of the MSOs offering LTIs provide full-value shares. Top MSO executives continue to receive large LTI grants exceeding $1 million indicating that these awards are primarily ongoing annual grants rather than new-hire or one-time retention grants. Among programmers, 76% offer LTIs to directors and above, and 83% of programmers that offer LTIs offer full-value shares.

“Participants are identifying their top people and locking them in with meaningful equity awards with vesting,” Croner said.

The 2014 MSO survey reflected the industry’s growing centralization and regionalization. “This year we collapsed the management jobs into one set of management titles and asked participants to indicate whether those jobs had corporate or regional scope,” explained Croner.

The biggest change on the programmer front was the addition of two new career levels: senior manager and senior director. “The addition of these positions to many of the job families reflects the growing maturity of cable programmers and supports further career advancement,” Croner said.

The surveys are valuable tools in the industry’s fight to stay competitive. “We use the survey to influence our merit budget planning, analyze individual jobs and evaluate competitive pay positioning and pay ranges,” Comcast’s Baker said. “The CTHRA compensation survey is instrumental to our organization’s pay programs.”

CTHRA is currently enrolling eligible employers to participate in its 2015 Compensation Surveys. For more information, please contact Laurie Krashanoff of The Croner Company, at laurie@croner.biz or 415.485.5521.

Where Does Nonfiction Programming Go from Here?

With the pandemic, a heated presidential election and the rise of the Black Lives Matter movement shaping programming choices in 2020, where does content go in 2021 and beyond?