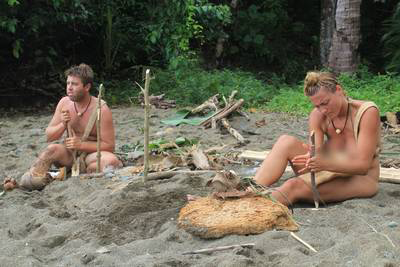 “They [showed up] and asked where craft services was,” she told producers at the annual RealScreen Summit in DC on Mon. “The cast members are so savvy today. Everyone thinks they know [what TV is].” In other words, they thought it was all an act for cameras and that they’d get rich—not that they’d actually be naked and afraid. “We lost 13 people on Naked and Afraid. That’s huge. I’d never experienced that.”
So is the life of a casting agent or producer in a day and age where just about everyone thinks they can get on TV and star in their own spinoff. Given the glut of reality programming, you can kind of understanding the confusion. What casting is looking for is that bigger-than-life personality that just pops—for good or bad. And it isn’t always where you think it will be.
Authentic Entertainment’s Lauren Lexton thought she had a good show about a couple struggling to become actors in L.A. Titled, “The Wannabes,” it showed, among other things, odd jobs that the couple worked to pay their bills. The problem was that every network exec passed on it, including Lifetime’s svp, nonfiction Eli Lehrer, who was then with Bravo. Looking back at the tapes, Lexton couldn’t help but notice one guy—a boss who was going off on the wannabe actors. His name? Jeff Lewis, star of Bravo’s “Flipping Out.”
Lehrer said he wished he could have viewed The Wannabes pilot and realized Lewis was the star. “That was driven by Lauren and Authentic. When she came back with Flipping out, we went to series immediately,” he said.
Lewis is now in his 7th season of the show, with Lexton attributing his success as well as that of Abby Lee Miller of Lifetime’s “Dance Moms” to the fact they do something. Lewis flips houses. Miller is a dance teacher. A series has to be about more than a great character. She pointed to the infamous ep of Fox’s “Restaurant Nightmares” with Amy’s Baking Co. You know the one… The husband-and-wife restaurant owners that berated their customers and had a social media meltdown after their episode aired. Amy was certainly a character, but in Lexton’s eyes, that’s not enough. “The thing about Amy and her world is she’s not very good at what she does, and she doesn’t care. It doesn’t make great television. It makes a great episode.”
Conlin Co pres/CEO Sheila Conlin cast that episode of Kitchen Nightmares. She knew the couple would make TV magic. Indeed, after it aired, the restaurant owners became a viral sensation. “That catapulted them into a huge success. Everyone wanted to give them a show,” she said. But that quickly ended. “They didn’t see the success and turned themselves into being unlikeable.”
Lehrer said he was pitched Amy. “My concern with her was we have less interest in a character being spun out of another network’s show. It feels like you have less ownership of that character,” he explained.
The panel ended with a well-worn Flipping Out clip, with a member of Lewis’ staff explaining how all of the water bottles must be organized with the label facing out or the house flipper would explode. Nowadays, it seems almost cliché to have such a high maintenance reality star, but at the time, “we were the first,” Lexton said. “It’s harder now. It’s been done.” And that sums up the difficulty with casting—finding that truly unique individual who isn’t produced or contrived.

It’s been relatively quiet on a regulatory front since WarnerMedia and Discovery announced their $43 billion proposed merger in May, but the honeymoon is over.