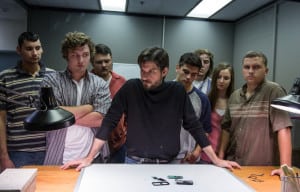 REENACTMENT- In 2001 Jobs sets out to reinvent the music industry with the ipod. As a visionary, he sought to create something so great that once people saw it, they had to have it. The Ipod was a radical transformation from the standard Walkmans on the market at the time, and became a huge success. However, he doesn’t stop there, and in 2007 he releases the Iphone. (Photo Credit: National Geographic Channels/Evelyn Hockstein)