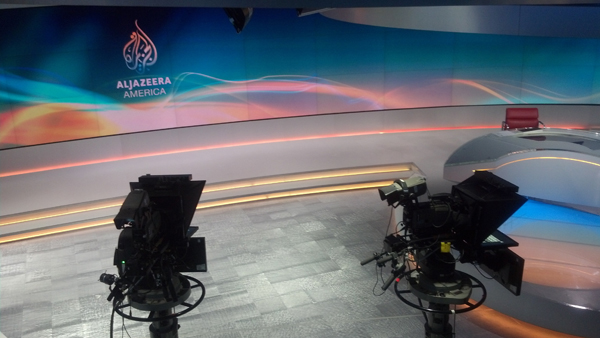 Ahead of this afternoon’s launch of Al Jazeera America, which went live in more than 40 million homes, reporters were invited to one of the network’s three live studios for a tour and a chat. (For a slideshow check out our homepage.) The temporary studio in Manhattan—currently one of two—was erected in four months time. For the past two months, a staff of approximately 200 has been running programming and production as if they were live.

According to Paul Eedle, the deputy launch manager for programming, the difference between AJAM and other news outlets is that its focus is “in-depth, fact-based, unbiased reporting,” with an emphasis on human stories. An example of this, he said, is evidenced by the network’s choice to cover Detroit’s financial situation. The network even set up a bureau in the city. “Other media might consider it not so important,” said Eedle.

There are 12 bureaus in all, with another perhaps surprising choice being Nashville. Part of this strategy, CEO Ehab Al Shihabi said in a conference call last week, is to be located in major American cities like New York and Washington D.C, but also "to go to an area where nobody has been covered.” According to Kate O’Brian, head of editorial, the network is hiring people who are actually from those bureaus to ensure the reporting is authentic. “To do that the best way we can, [we are] hiring people who know those stories, who have lived those stories, who have maybe reported similar stories in, you know, earlier careers. It’s very important for us… to have sort of homegrown coverage of different parts of the United States,” she said.

Eedle also emphasized that “not everything is bad news;” there will be a fair share of uplifting stories on the agenda. There will also be shorter commercials—on average 6 minutes an hour, which contrasts with the net’s competitors’ average of around 15-17 minutes. The network offers 14 hours of live news, including 5 live shows. Additionally, in a few months time the net will launch a morning show and a sports show.

On the digital side of things, Al Shihabi said that there is “full conversion between the linear programming to digital to Twitter to apps to mobile apps.” But at the same time, its capabilities are currently limited. “From a contractual perspective with the cable operators, we are not yet at the same footing with MSNBC, CNN, and Fox, because we have some restrictions on the live streaming, but I think we have dedicated almost 80 journalists for the web,” he said.

When it comes to naysayers and advertisers uncomfortable with the network’s association with the Middle East, Al Shihabi said the company acknowledged and faced this challenge from the beginning. “We have engaged all the stakeholders, really, in a lot of dialogue,” he said, including think-tanks, congressmen, key influential and community leaders and special interest groups with the goal of presenting their mission. “There are certain people still not supporting us, but you know what? This is, I think, the dynamic in the United States. So I think we are not concerned any more. I think, you know, the coverage in the media and the dialogue-building, it’s actually materialized very well.”

Charter recently announced plans to invest about $5 billion to support broadband buildout to unserved areas—with $1.2 billion of that offset by support won in the FCC’s Rural Digital Opportunity Fund