It’s not really clear what’s inside this Lincoln Park storefront on Chicago’s north side when you walk past. The windows are tinted jet black and the signage simply says Studio Xfinity in lowercase letters. It looks more like a nightclub or a trendy fitness studio than a Comcast retail store. It’s definitely different, and that’s the point.

Comcast worked with Edwin Schlossberg’s ESI Design on this pilot store, which is slated to open sometime in June. Inside, the rows of DMV-like seating are gone, replaced with open space and lots of high tech product demos. There are touch screens everywhere. Hands-on demos of smart locks, the new X1 voice remote and even the Xfinity app. It’s all part of Comcast’s emphasis on improving the customer experience. The Lincoln Park store is the first of its kind, but the MSO is revamping all of its storefronts. So far, 125 of its approximately 500 stores have had overhauls that have included adding demos and getting rid of those glass encasings that existed in some stores separating employees from customers. None of the reimagined stores are as interactive as Lincoln Park, but Comcast Cable pres Neil Smit says it’s a testing ground, with the best elements to be incorporated in other locations.

The Studio Xfinity store looks more like an Apple store, even with something similar to a genius bar. The idea is for customers to use it like they do other retail stores—to swap equipment, pay a bill, learn how to use a Comcast app, etc. Unlike other Comcast stores, it will sell some retail products, such as the SONOS Playbar that provide a HiFi home theater sound experience by connecting through a broadband router. It’s also a good event venue space, with Comcast planning to hold screenings and other community gatherings at the store. 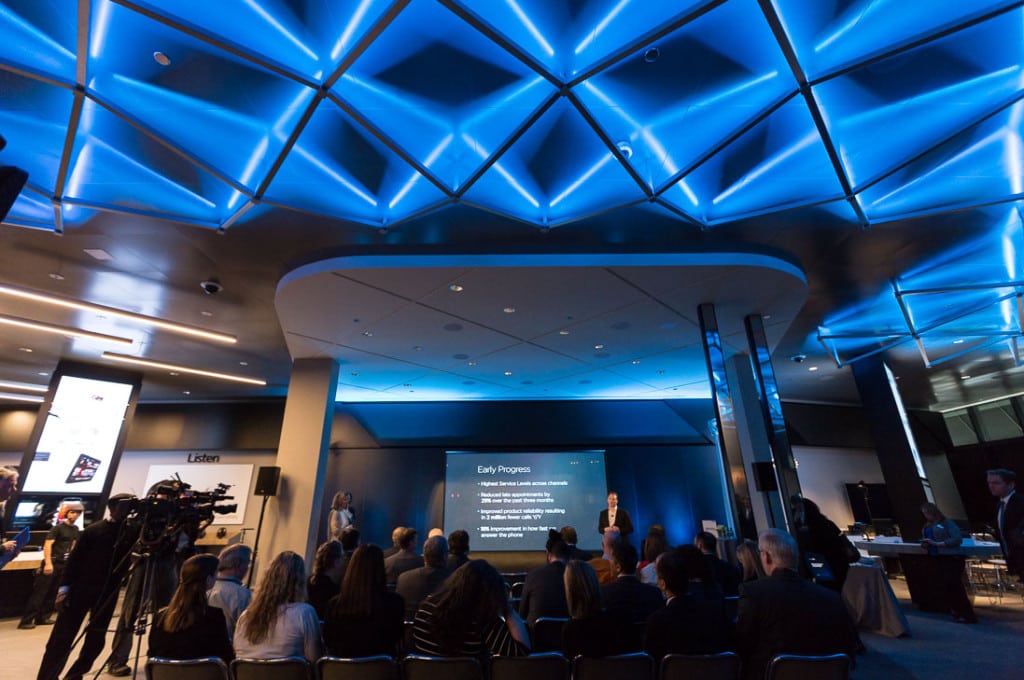 The different kind of store philosophy includes staffing. Comcast CEO Brian Roberts said about 300 people were interviewed for the 32 positions (we’re told more than 800 applied). Employees went through a 7-week training course so they would be prepared to help “guests.” Yes, guests, not customers. As Roberts announced last week at INTX, every Comcast employee (including him, we’re told) will be go through hospitality training—and given that Universal Studios is part of Comcast’s portfolio, it seems safe to bet some of that sort of theme park experience will translate (the hospitality, not the thrill rides). Along with hospitality, the 7-week course included very in-depth product training since Studio Xfinity is meant to be a bit of laboratory. For example, right now it’s housing a virtual reality demo featuring Universal’s upcoming “Jurassic World.” That display won’t always be there, but Comcast plans to keep bringing in new goodies for customers to try.

“This has been in the works for a couple years. It’s completely different from any other retail store we’ve had,” Roberts told reporters gathered at Studio Xfinity last week for a sneak peek. “We’re looking at it as a huge opportunity as we improve the service. [The hope is] customers will say, ‘gosh, I didn’t know I could do that.’”

Given the complaints over the years, the bigger test may be whether they look around and say, “Gosh, I didn’t know Comcast could do that.”