The cable operator’s access network is a key asset to providing Internet services to customers. Customers are astute, as they are constantly comparing service offerings between cable, telco, satellite, and wireless network operators. How does the cable operator stay ahead of this competitive curve? By pushing itself and its vendor partners to perpetually develop and assess the latest access network technologies and enhancements.

Three network architecture changes are making their way to the cable access network:

All three are designed to continually support the services that the customers expect today and into the foreseeable future. Note that individual operators will choose to deploy these enhancements to varying degrees.

In today’s network, the PHY layer, or the part of the network equipment that is responsible for supporting the electrical interfaces connecting to the physical medium (IEEE), is located in the network hub site. Remote PHY will move this layer out of the hub site and into the fiber node, providing the following benefits and challenges:

Simply defined, “fiber deeper” is driving fiber closer to the customer’s home. The legacy HFC network had fiber nodes serving hundreds of homes, with “active” elements such as amplifiers and line extenders driving the signal down the coax segment. The nomenclature used is “N + x” where N is the node and x is the number of actives between the fiber node and the home. For example, N + 6 means there are six actives on the coax segment between the node and the home. Driving fiber deeper means driving toward N + 0. Fiber deeper is not a new access network development. Cable operators have been doing this for decades with node splits. Fiber deeper is just getting more attention now as cable operators are getting closer to N + 0 and setting service group targets fewer than 100 homes.

While the PHY layer is getting pushed out to the fiber node, network function, or CCAP, virtualization is focused on moving the remaining CCAP layers out of the hub site and into a centralized data center. As with Remote PHY, CCAP virtualization has its benefits and challenges: 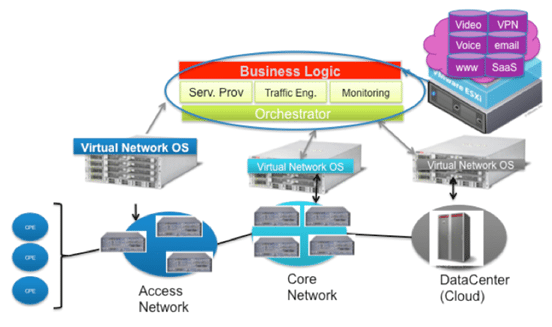 The above-defined architecture changes are occurring simultaneously and in the next few years on the cable operators’ access networks. All are designed to continue to support the services that the customers expect today and into the foreseeable future.