When it comes to Black History Month, the first images that come to mind are often from the Civil Rights Movement, particularly the period of the 1960s. This, of course, makes sense given the era’s rich story—from Martin Luther King, Jr, to Rosa Parks to the Selma marches—but this year’s Black History Month programming is using a wider lens to examine important people and events in the history of American blacks. 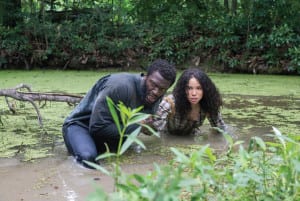 Underground: Aldis Hodge as Noah and Jurnee Smollett-Bell as Rosalee in WGN America’s ‘Underground.’ Both participated in a screening and discussion this month at the DuSable Museum of African American History.

WGN America is opening the history book to African Americans’ earliest chapters in the US with “Underground,” a scripted drama that follows the plight of plantation slaves plotting their 600-mile escape from Georgia. While the series, executive produced by musician John Legend, doesn’t premiere until March 9, WGN America has used Black History Month to spark interest in the story of the revolutionaries of the Underground Railroad. In addition to airing first-looks throughout February, star Jurnee Smollett-Bell participated in Macy’s Black History Month celebrations by leading a panel discussion in various cities with a host of emerging stars. At each of the Macy’s Black History Month events, store customers receive exclusive Underground items and get a sneak peek at the series. WGN America also hosted a special screening with the cast in Chicago on Feb 9 at The DuSable Museum of African American History, as well as screenings at Historically Black Colleges and Universities across the US.

“Underground captures all the qualities we look for in a show—thrilling storytelling, an emotional narrative, a unique world on the television landscape and relevance to America today,” said Matt Cherniss, president and general manager, WGN America and Tribune Studios.

“When we came together to create Underground we had one mandate, and that was to be bold,” said creator/executive producer Misha Green. “We wanted to be emotionally bold in our storytelling. 1857 was a desperate and dangerous time in America, and it bred desperate and dangerous people… We wanted to be visually bold in our look and feel. Antebellum South is often portrayed as a painting hanging on a wall, and our director Anthony Hemingway helped us rip that painting down, and live in it…”

Creator/executive producer Joe Pokaski added, “We wanted to be musically bold to connect the past to the present. Our fellow executive producer John Legend has infused the old and the new, using contemporary music, with all its bass and synth to drive our soundtrack, as well as traditional work songs, and period specific music to add cultural context.” 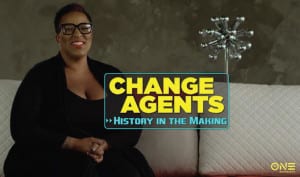 TV One’s ‘Change Agents: History in the Making’: A look at the short film “Off Broadway: Frenchie Davis” by Jeanine Daniels (Courtesy: TV One)

With TV One being the exclusive home of the NAACP Image Awards, February is always a special month. So much so that the network chose it to introduce a new brand promise to viewers. During the Image Awards on Feb 5, it rolled out “Represent” in its tagline and logo to show that it will “represent the best of black culture and entertainment—past, present and future.” In keeping with that theme, it’s recognizing Black History Month with “Change Agents: History in the Making,” a series of short films that focus on current day achievers and change agents from college campuses, the community, corporate America, government, technology and beyond.

“We were starting to go down that same track of looking back, [asking] what should we do for Black History Month, and then we said, ‘Wait a second. Why are we always looking back?’” said TV One president Brad Siegel. “Every network is always looking back and looking at history as something that happened in the past. Let’s defy expectations and look at history in the making. We’re in the midst of the biggest Civil Rights movement since Martin Luther King’s Civil Rights movement.”

Change Agents films premiere every weeknight on TV One in February, with encores every weekend and a longer version posted at TVOne.tv. Those profiled include Tyree Guyton, whose art has brought attention to the East Side of Detroit, a neighborhood largely abandoned after the 1967 riots (film by Alton Glass). Another film looks at the African American-owned talent agency, Gil Hayes Talent (film by Che Rhymefest). “We paid and funded these five filmmakers to make these short films. They have important voices, and we gave them an opportunity to elevate their voice and also the voices of the subjects they chose,” Siegel said. “That’s one way that one of our values and principles got manifested in Black History Month. Another [value] is taking risks… I think doing history in the making and taking risks on young, new filmmakers who have something to say is another example of that.”

BET is honoring history in the making with “New Black History,” a digital effort that gives a nod to events from the past 30 years, including Barack Obama becoming the first African American president and Rihanna becoming the first black female ambassador for Dior. Web series “Send Me” is about a woman (Tracie Thoms) who has the power to send black people back to the days of slavery. Her husband is determined to stop her even though there are people who want to go. Linear networks BET and Centric will air the “American Black Film Festival Awards: A Celebration of Hollywood,” which celebrate black culture and recognize individuals, movies and TV shows that had a significant impact on American entertainment (Feb 23) and the basic cable premiere of “Twelve Years a Slave” (Feb 27). 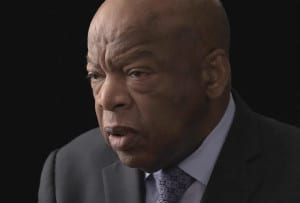 WE tv has taken a different approach to Black History Month, creating a series of PSAs on the network and online with Members of Congress sharing stories and perspectives about the importance of the month. Congressman Danny Davis (D-IL) talks about young people making history today as they advocate for change, while Congresswoman Karen Bass (D-CA) reflects on how Harriet Tubman can be an inspiration to a new generation.

Other than a brief flash of the words “WE tv Salutes Black History Month,” there is nothing about the spots that makes you think of the network. “That was really part of the strategy,” said WE tv svp, marketing Rosie Pisani. “This is the 2nd year we’re doing Black History Month PSAs with elected officials. Prior to that, we had used our talent, which was wonderful. However, from a positioning standpoint, I felt like nobody had owned Black History Month and there was a benefit in us not having it self-serving. We’re the number one destination for African American women most nights of the year. That means they understand our commitment to providing programming, and this was really an effort outside programming.”

With college hoops and the NBA in full swing, you might forgive ESPN for not creating content specifically for Black History Month. But it’s an important tradition at the sports network. “We’ve been celebrating the month since 1999. The ultimate reason why we do it is we recognize that our fans are very diverse, and we want to celebrate and honor that diversity through our coverage,” explained Ashley O’Connor, ESPN’s senior manager of programming & acquisitions.

The centerpiece of ESPN’s Black History Month programming was an hour-long “SportsCenter” special titled “Rise Up” (debuted Feb 14). It featured four segments with prominent African Americans discussing events in the news cycle that impacted their lives—including Chicago Bulls’ Taj Gibson on losing four friends to gun violence in the last four years to former tennis pro James Blake’s tackle and arrest outside a NYC hotel and his commitment to help stop profiling. “A couple years ago, we did a special focused on the ‘n-word.’ We definitely have no problem going to the current issues that need to be discussed and people want to hear about,” O’Connor said. “It’s obviously called Black History Month. We want to honor the people who have gotten us where we are, but we also want to let people know it’s still something that we want to be focused on into the future.”

The door is open for California and Vermont net neutrality laws to take effect after a federal judge’s bench ruling Tuesday. Judge John Mendez rejected broadband providers’ attempt to block the law, which