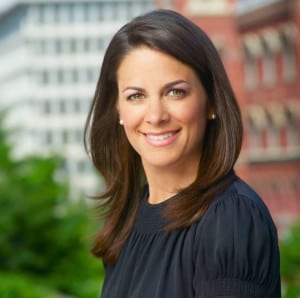 The 1990s brought its share of fortunes to the stock market, but one of the best Wall Street trades of the era might have been when Courteney Monroe leapt from American Express to HBO. As she rose through the ranks over the next decade, HBO fast became one of the biggest consumer brands in the world, and Monroe had built a reputation as one of the savviest marketers in cable. As always, success breeds admirers, and it wasn’t long before National Geographic Channels lured her away to become its own CMO and eventually CEO as of 2014. By late 2015, she ascended even higher to her current role overseeing all Nat Geo-branded content worldwide. “I have had the great fortune in my television career to move from one incredibly strong brand—HBO—to another—National Geographic,” she says. “They are both iconic, meaningful and special and both stand for quality. Who could ask for more?”

Interestingly, Monroe’s marketing efforts at HBO centered on positioning the network as the place for the discerning viewer (It’s not TV, it’s HBO—remember?). And so it’s only ﬁ tting that she has been on a similar mission to up Nat Geo’s game and visibility in recent years.

Monroe’s ability to attract A-List talent has been especially impressive, evidenced by her ﬁ rst big move under a new premium programming strategy: greenlighting the “voice of God” himself Morgan Freeman, whose “The Story of God” went on to become a globally recognized franchise and the highest-rated series in Nat Geo Channel history. Always on the lookout for new frontiers, she also lured Hollywood legends Brian Grazer and Ron Howard for the science-oriented “Breakthrough” series as well as the much-anticipated six-part series “Mars,” which premieres in November. And she has done it all amid unprecedented changes in the industry. “Change and disruption are constant, competition is ﬁ erce and it’s incredibly challenging to capture viewer attention,” she says. “But there is also tremendous opportunity for those with new and creatively ambitious ideas. Exceptional content is platform agnostic.” If there’s one thing Monroe took from her HBO experience, it might be that obsession with excellence. “We are focused on keeping our compass pointed toward the north star of quality,” she says. “If we do that, we will win.”

Of course, Monroe has also made sure that glitz and glamour don’t overpower or displace the century-old traditions that anchor the National Geographic brand. That was evident when she partnered with Fox Searchlight in February to launch “He Named Me Malala,” the inspiring story of the resilient Nobel Prize Laureate Malala Yousafzai. In many ways, Monroe has redeﬁ ned the Nat Geo experience by mixing the appeal of star power and Hollywood storytelling with an intellectual devotion to learning, science, global culture and a celebration of the human condition. It’s a difﬁ cult combo that could just as easily implode under its own weight as take Nat Geo’s brand to new heights. But Monroe has navigated these waters beautifully, never taking her eye off her consumer-centric and globally relevant mission even as new platforms proliferate. “The next generation is simply not going to watch television the way we did,” she says. “They already aren’t.”