Kory Kozak, coordinating producer of features at Golf Channel, used to play football at Rutgers University from 1988-92 (see pic below) and was a starting defensive end for 3 seasons. He also produced and directed 2 TV features and a short documentary on Eric LeGrand, the paralyzed Rutgers football player. Kory made several appearances with Eric (see photo above), helping him raise money and awareness for his charity. The short documentary on Eric was nominated for an Emmy last year. 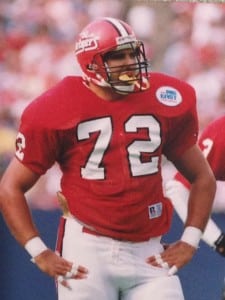 Public Knowledge is the latest public interest group to mount a campaign to push for the confirmation of Gigi Sohn as the FCC’s fifth commissioner. Sohn actually co-founded the group focused on copyright