Brendan Countee, who recently left Hulu to join Showtime as vp, original programming, shared some fun facts with us:

Countee once rode a bicycle across the entire US, from the Golden Gate bridge to the gates of Georgetown, covering 2,866 miles over 44 days. The cause: a charity benefits children living with HIV and AIDS in Africa. He personally raised $13,000 out of the total $60,000 raised during the event.

Countee’s brother, Adam, is also in comedy, as a writer for “Silicon Valley.” (Brendan used to run comedy at Hulu.) The two brothers had a comedy group with their two best friends, which was featured in a New York Times article. That lead to the group signing with UTA and developing the first studio funded web series for ABC. In addition, the group developed half-hours with both Twentieth Century Fox and ABC Studios. It “was truly a dream come true,” said Countee.

Interestingly, he is in the process of getting his pilot’s license to fulfill his childhood dream. So far, he’s logged 25 hours out of the 40 hour minimum of flight time.

Lastly, Countee’s father was a black brain surgeon and civil rights activist. He is proud of his father, who is honored on a monument in Oklahoma City next to Martin Luther King Jr. and Thurgood Marshall. 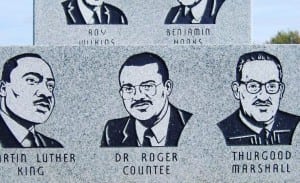 According to the early numbers, 55.2mln viewers tuned into the second and final showdown between Donald Trump and Joe Biden across Fox News