Time Warner’s Start Over service is generating some interesting results, some of which challenge the conventional VOD wisdom. Simply stated, Start Over is a success and predictably so. The launch of the Start Over service was born of direct customer feedback through Time Warner Cable’s market research. When subscribers were asked to rank a comprehensive list of interactive TV applications, the Start Over service was by far the most popular. In fact, it was 10 times more popular than the next most popular service. When you provide a service that your customers have asked for that clearly, its success is predictable—provided you can deliver. Fortunately, Time Warner Cable has invested in the technology to make it happen. Start Over represents one of the first new services to leverage the analog/digital simulcast and real-time acquisition technologies deployed within the company. Here follows some insight into why the service is so successful, plus analysis of real-world data to learn more about the demands it puts on the video on demand (VOD) infrastructure. What is Start Over? Start Over is one of the first large-scale deployments of a service that enables the time-shifting of live television without the need for upgrades to customer premises equipment (CPE). Time-shifted TV allows digital cable subscribers to begin watching their favorite broadcast TV program at a more convenient time within an expanded time window. Unlike traditional on-demand services that have license windows measured in days or weeks, the Start Over content is only available to start a session within the actual broadcast window of the particular content. Here’s how it works: 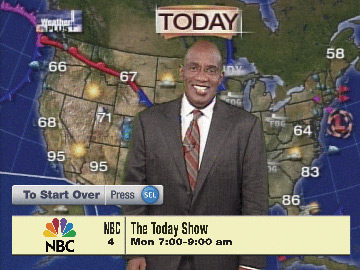 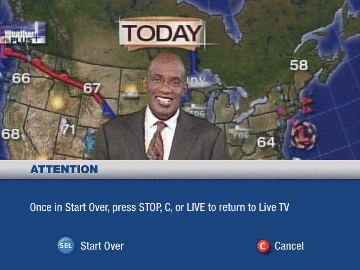 1. Upon channel tuning, a rights-driven “prompt” tells the viewer that the feature is active and available for that program. (See Figures 1 and 2.) 2. After the viewer presses SELECT, the show switches from the live broadcast stream to an on-demand stream from the server. 3. The show starts over at the beginning, with the ability to pause the program, but not fast-forward or rewind. 4. At end of show, the viewer can Start Over the next show or return to live TV. This service represents a collaborative approach between the cable operator and the content providers where the advertising value is preserved. The service is currently offered free to the digital subscribers. As the service is currently offered, the ability to access the content and start it over is directly limited (through software controls) to the broadcast window. That is to say, the customer can only access the on-demand version while the show is being broadcast. The hope is that in the future the Start Over window will be opened up beyond the broadcast window. During the session, the user can Start Over multiple times during the broadcast, pause the program, and Start Over the following show once the session ends. When the service first launched on Nov. 1, 2005, it consisted of approximately 50 channels comprising 10 network groups and two local channels (the local WB and PBS affiliates). TWC is continually working to add additional content providers to the offering. What is the impact? The impact of this service needs to be examined in terms of sessions (streams) and content. Unlike the world of telephony where content (phone calls) did not really factor into the traffic equation, in the world of VOD, content is the key variable in the traffic model equation. Real-time acquisition services such as Start Over are proving to be major drivers of new content, which in turn is driving new sessions. Let’s examine the interrelationship between sessions and content more closely. Historical traffic modeling equations are based on session arrival time and the hold time of that session to determine the total number of simultaneous sessions at a particular blocking probability. With the introduction of Start Over, there is an increase in the number of new sessions and a change of hold times respective to those new sessions, resulting in a greater number of simultaneous sessions. Clearly it is the content Start Over makes available that is driving this trend. Since the introduction of the Start Over service, the VOD system has seen between 50 percent and 75 percent more peak stream usage. (At the service group level, this requires the VOD service group to be split or more channels to be added to the narrowcast to avoid contention.) In Time Warner Cable Start Over deployments, more than 10 percent of digital set-top boxes access the service on a daily basis, employing it on average more than 1.5 times per session. The Start Over icon acts as both a user prompt and an incredibly powerful advertisement for the service. It is seen every time a customer tunes to a Start Over enabled program (albeit for just a few seconds so as not to be overly intrusive). Additionally, we see a strong correlation between session duration and the duration of the broadcast show. In other words, when customers order the program, they watch it. And by the way, they watch the ads, too. A deeper look Seven days of data were collected from one of the first sites in the Time Warner network to implement Start Over. Data was collected by extracting session-based and asset-based data from the production logs on the system. Sessions are identified only by an abstract session ID to protect subscriber privacy. Genre data was also collected from each asset. (See Table 1.) Examples of genres are: RTA, Real Time Asset (Start Over program); HOD, HBO on Demand; MOD, Movies on Demand; and so on. In analyzing the data, we looked at stream utilization (when people watch and how much); content distribution (what they watch, both over time and at any given moment); and modulation and genres (roughly, how the type of content they watch changes over time). As we’ll see, two issues of particular interest became evident when analyzing the data. The first is the phenomenon “long tail.” The long tail does not provide an accurate description of how content is viewed at any given time in an on-demand system. The second issue is content velocity, or the speed with which new content enters and leaves the system. This has implications for content storage, propagation and data capacity and throughput. Stream utilization Figures 3-9 provide an overview of the system during the period measured. The figures each show a 24-hour period beginning and ending at midnight. The Y-axis of each figure represents the total session count on the system, while the X-axis represents time. The colored bands display the breakdown of the content by genre at the beginning of each minute.

A quick look at these charts reveals some clear observations. First, usage patterns and total utilization vary significantly throughout each day, with movie usage showing the largest fluctuation. Both RTA and music video viewing are significant. Perhaps the most interesting observations are the pure stream count variability and the difference in usage through the day. The data indicate that while the pure peak session count is lower on Sunday than it is on Saturday, the utilization of the system extends well beyond traditional prime time. A second interesting observation is the difference in usage among movies, RTA, and the traditional subscription VOD (SVOD) services of HBO, Showtime, Cinemax and The Movie Channel between the weekend and the weekdays. It appears that subscribers watch more movies on weekend nights and more short content on the weekdays. Also, although there are more than 35 genres defined on the system, actual sessions are consistently dominated by only six genres. Investigation of the data sets within those genres indicates that a very small number of titles represent the majority of the stream. We’ll take a closer look at this idea in the next section. Finally, from a pure utilization perspective, we can observe that the system peaks with approximately 3,500 simultaneous sessions on Saturday night and has lowest observed peak of approximately 1,600 simultaneous sessions. The weekly peak is approximately 120 percent higher than the lowest day’s peak. By comparison, a larger Time Warner system that does not have Start Over enabled saw a weekly peak 50 percent higher than the lowest peak. These observations lead to the following conclusions. First, at a gross level, the usage of the system follows some fairly accepted notions. However, the content makeup of the system is quite turbulent, but at any point in time the content and the stream mix are relatively stable. Also, while there are other variables that must be considered when comparing two systems, the initial data suggest that Start Over may lead to a higher peaks in usage compared to traditional VOD systems. Content utilization This data set analyzes the usage of content both instantaneously and over time. Figure 10 shows the stream counts vs. content over a 24-hour period, and Figure 11 shows stream counts vs. content at the peak utilization time on Saturday night.

Black content and representation have reached new heights in mainstream media and that doesn’t just apply to the U.S. “Content is now being developed for an international audience… The consumption of