According to new data from TeleGeography’s GlobalComms Pay-TV Research Service, North American telcos, led by Verizon and AT&T, have succeeded in selling IPTV service to almost 40 percent of their broadband subscriber bases. However, with more than 80 percent of households subscribing to some form of pay-TV service, North America’s market is saturated, and subscriber growth is at a standstill. 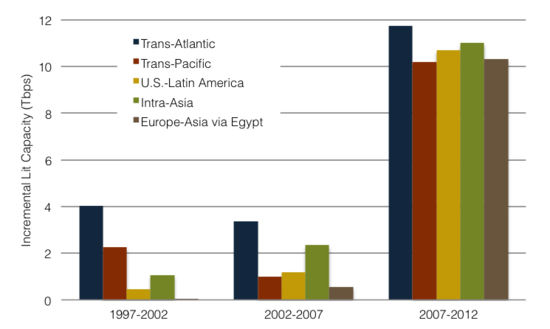 Western Europe’s pay-TV market also is nearing saturation despite having a penetration rate 20 percentage points below that of North America. Market slowdowns here as well as in Eastern Europe can be attributed to the continued prevalence of free-to-air service in many countries.

In these three regions, telcos will be hard pressed to extend their IPTV subscriber base much further, as success will depend on taking subscribers away from other operators in highly competitive markets.

Three other regions also will see IPTV growth stymied but for different reasons. IPTV opportunities in Latin America are tightly constrained by market structure and lack of a supportive regulatory regime, while the prevalence of free-to-air services and wide-scale piracy are barriers to growth in Africa and the Middle East.

In contrast to the mature markets, the Asia-Pacific region has a pay-TV household penetration rate of only 46 percent, and telcos have sold IPTV services to just 12 percent of their broadband subscribers thus far. This leaves room for market growth, while the 987 million households in the region present a huge opportunity for IPTV.