“The future is in fiber optic high-speed Internet access, as compared to DSL and cable modem service.”

“Many new business models are made possible by high-speed access, and fiber access in particular. By contrast, DSL and cable modem access are subject to sharp capacity limitations which are rapidly rendering them obsolete for the types of activities Americans want to engage in online.” – Crawford, Susan P. “Transporting Communications.” Boston University Law Review 89, no. 3 (2009): 871–937, pp. 928 & 930.

“…the broad consensus seems to be that the long-term fixed platform will likely be fiber, and cable plant too will likely become increasingly fiber-based over time, as the theoretical and long-term practical capacity of fiber to the home systems will be orders of magnitude larger than for cable systems.” – Benkler, Yochai, Rob Faris, Urs Gasser, Laura Miyakawa, and Stephen Schultze. Next Generation Connectivity: A Review of Broadband Internet Transitions and Policy from Around the World. The Berkman Center for Internet & Society, 2010, p. 63

What a difference a few years makes! As late as 2009 Susan Crawford was arguing that cable broadband was becoming obsolete and Harvard’s Berkman Center believed the only long-term answer to increasing broadband demand was fiber. Today, Crawford is warning of a looming cable monopoly. To be sure, DOCSIS 3.0 technology has given cable a relatively low-cost upgrade path while traditional telcos generally have to invest far more in fiber to achieve similar performance.[1]

So, what is really happening in the market? As the chart below shows, data on fixed broadband subscriptions contradict the claims of monopoly. The most recent FCC data only goes through December 2010, so we extend the figure to June 2011 using data from the OECD.[2] The data show that cable has always held the majority of connections, peaking around 2003 when it held close to 60 percent of the fixed broadband market. 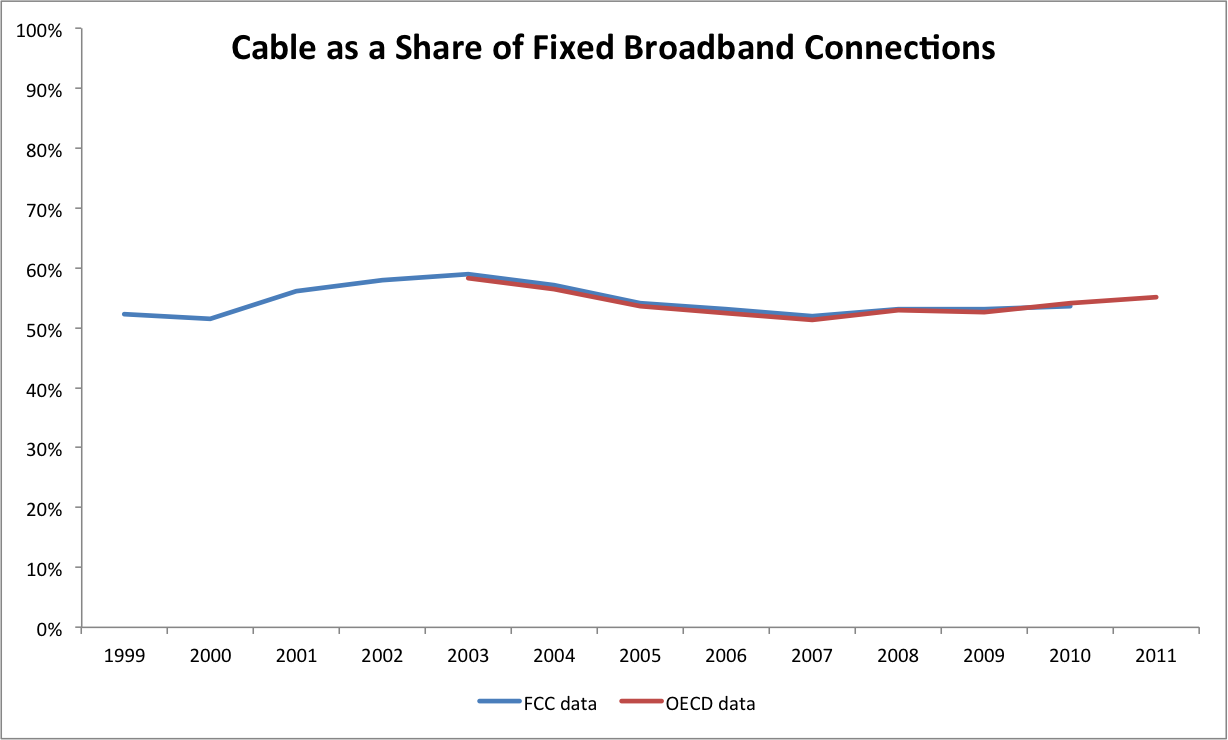 The share of cable connections is trending upwards, but, at least as of last year, did not appear to be significantly different from the past.

More recent data comes from companies’ financial reports. The following chart shows the quarter-to-quarter percentage change in the number of high-speed Internet subscribers for Comcast, Time Warner Cable, Verizon, and AT&T. Cable companies have been doing well in terms of net additions for several quarters, but not significantly better than Verizon, and even AT&T is reporting net gains from its U-Verse platform. 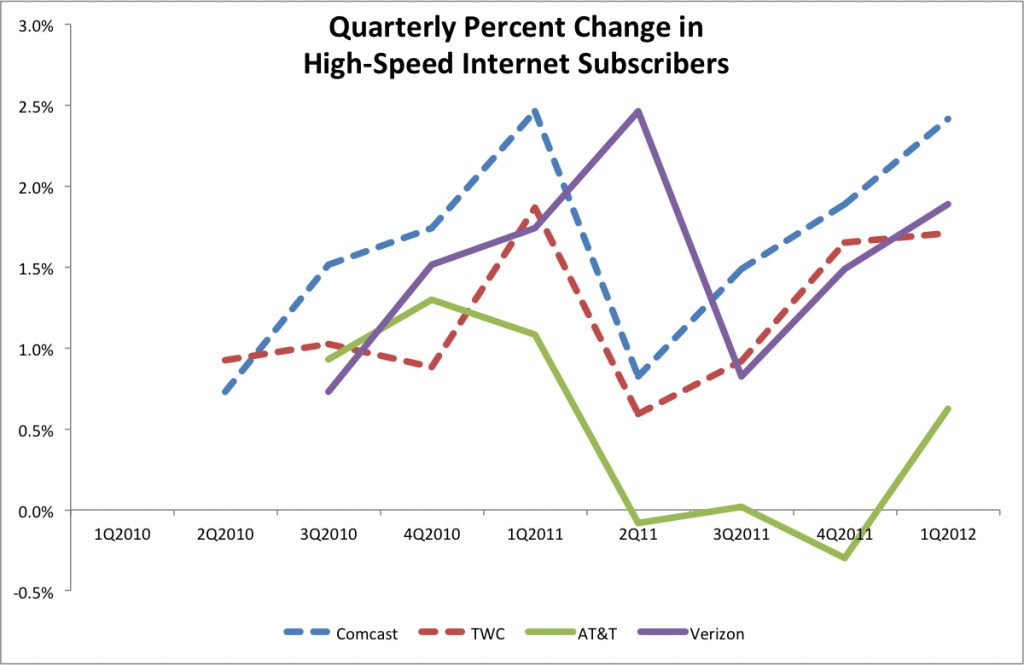 Note: Time Warner Cable reported 10.716 million HIS subscribers in Q1 2012, which represented close to a 7 percent increase over Q4 2011. However, 550,000 of that increase came from TWC’s acquisition of Insight Communication and 42,000 of it from the acquisition of NewWave Communications. The percentage shown in the figure deducts increases due to acquisitions.[3]

None of this evidence means that Crawford’s warnings are necessarily wrong, of course. Whether cable’s cost advantage will ultimately translate into a monopoly or any increased market power, however, will depend not just on technological differences but also on changes in demand.

When an HD video stream comes from Netflix at less than 5 Mbps there is little advantage to cable DOCSIS 3.0 relative to a DSL connection with at least 5 mbps. But demand will surely change over time, and cable’s cost advantage will be an important point in its favor. That’s one reason why AllianceBernstein’s analyst Craig Moffett is so bullish on cable stocks.

Even as critics are pivoting from demanding that we focus only on fiber to warnings of a cable monopoly, the market is shifting under their feet again. Today, consumers are adopting smartphones and tablets in droves. The trend towards wireless is already affecting the development of Internet innovation (think mobile apps). Cable still has some advantages in that area—wireless providers need to offload their data somewhere, after all—but it may yet not end up as the dominant technology.

More generally, this market changes quickly. A few years ago policymakers were being urged to focus on fiber. Now they are being warned about a cable monopoly even as wireless broadband is taking center stage, as the FCC data shown in the figure below demonstrate. And surely in a few years technology and demand will have moved us in directions we can’t yet predict. 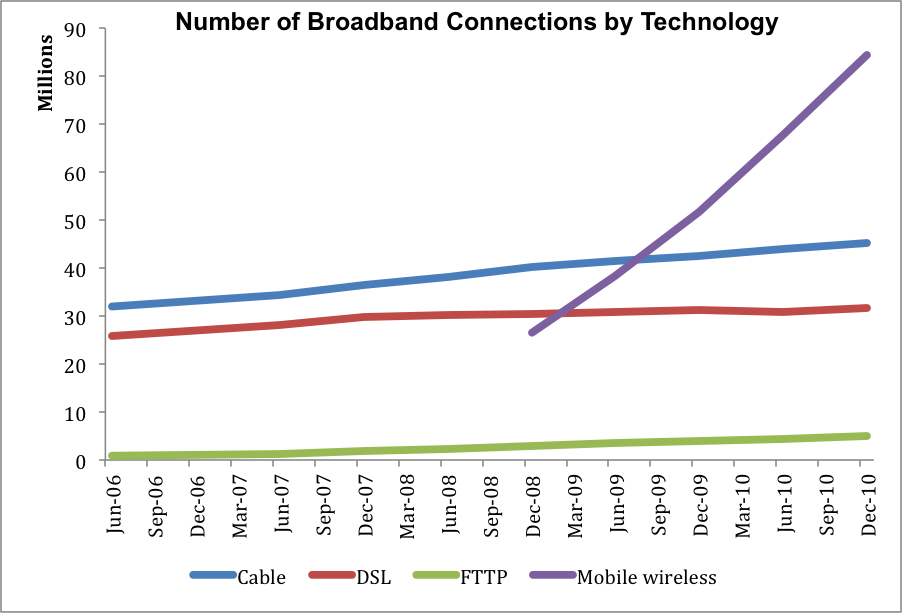 Policymakers should, without a doubt, keep a close eye on market conditions and work to ensure an environment conducive to competition. But if this fast-changing market teaches us anything, it’s that we should think twice before we conclude we know the endgame.

Scott J. Wallsten is vice president/Research and Senior Fellow at the Technology Policy Institute, and we repost this blog with his permission. Contact him at swallsten@techpolicyinstitute.org.

[1] Christopher Yoo has pointed out the fiber-cable worry flipflop, so I can’t claim credit for noticing it.
[2] I have been very critical of the OECD rankings. However, data for a single country over time should be reliable if the within-country definitions remain constant. Judging from how closely the OECD data track the FCC data it is likely they come from similar sources.
[3] For more information, click here and click here

FX ordered limited thriller series “Class of ’09,” which will be available exclusively on FX on Hulu . — FS1 will air an exhibition game between two 14u baseball teams from NYC and Chicago. “A Dream