Only a few years ago, 10 Gigabit Ethernet (10GigE) seemed at best a vision for the future. But today it is widely available in network interface card (NIC) interfaces for servers, within switches, and supported by wideband fiber transport infrastructures for both local and remote intersystem communications applications. Within the same timeframe, video services have migrated rapidly away from the original point-to-point architecture of application software interface (ASI) transport and time division multiplexing (TDM)-over-fiber, to GigE transport. Internet protocol (IP) video and video-on-demand (VOD) over GigE infrastructures are now widely deployed. The availability of such high-speed infrastructure presents novel opportunities for the design of systems carrying IP video and VOD. With such flexibility, subscriber "churn" will be reduced, and cable operators will be able to architect solutions vastly richer and more functional than ever seen in the past. This article retraces the evolution toward 10GigE switches, interfaces, and transport. 10GigE enables a new array of architectural methods for designing and deploying IPTV and VOD service offerings—and is readily migrated to other forms of real-time and near real-time applications. 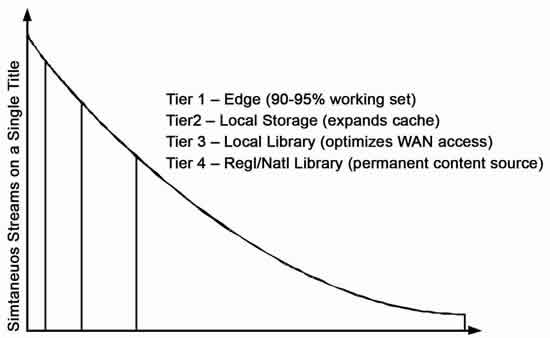 Tier 1 is closest to the edge and is where the content is played out in real time. It also accounts for a small percentage of the hardware because of the caching efficiencies delivered by dynamic popularity algorithms. Tier 2 is local storage and may be within a single system or in a peer system connected by high-speed local data capacity. Tier 3 is a local content library that enables popular content to be held locally and accessed via inexpensive networking resources. Tier 4 is the permanent source of content and can be located anywhere, even in a national headend. Each caching tier has resiliency within groups of systems at that same tier and with systems at higher tiers within the architecture. The operator does not need to statically assign popularity tags to content or manually propagate content to libraries or specific caching nodes. 10GigE (and n*GigE) reduces the distributed node-to-node transport latency sufficiently so that a variety of cache management operations can be utilized. Figure 3 shows the dramatic latency reduction enabled by 10GigE—a 1-hour show can be filled in 1.35 seconds, or 2,667 independent and unique shows can be filled in 1 hour. These performance numbers assume full utilization of the available capacity. Actual numbers will vary because of the multifunction use of the transport and packet overhead.

High-speed transport and switching can be used as the vehicle of special operations, such as creating resiliency for the most popular titles. Since content is being filled into caches much faster than real time, sufficient data capacity exists to perform other management operations as lower priority operations. Functions such as a "provision multiple", whereas a stream is composed of several independent streams (e.g., program plus subscriber targeted ads), can also be assembled from multiple content locations. 10GigE-based VOD Using n*GigE and 10GigE, operators can build nationwide networks today. 10GigE switches and transport are used both as a clustering mechanism within hubs and as a transport mechanism between hubs. Figure 4 outlines a typical design of such a system.

The end-to-end solution consists of groups of vault servers (with thousands of hours of content stored in each vault), intermediate groups of caching servers (whenever latency reduction or data capacity mitigation is needed), and edge groups of streaming servers. The addressing and switching tools provided by the GigE switching system are utilized, such as jumbo frames, VLANs, multicast pruning of server clusters, and prioritized transport. High-speed connectivity also strengthens the fault tolerance of the end-to-end system. For example, vaults and streaming caches can be replicated and rebuilt in near-real time. New systems can be added transparently, and content can be dynamically load-balanced as a background (but low latency) operation. Finally, even the edge network interface can benefit from 10GigE transport. New breeds of edge modulators are being considered that can aggregate up to 128 6-MHz channels of downstream content. Using today’s modulation (64/256-QAM), the aggregate capacity needed to serve such a cluster is on the order of 5 Gbps. Using future modulations, the spectral density can double, and thus the deployment of 10 Gbps in the backbone and within streaming servers enables the flexibility to grow into future 10 Gbps service capacity tiers in the edge network. Commodity hardware solutions Figure 5 outlines the tradeoff between proprietary hardware and commodity hardware. At a specific point in time, proprietary hardware can provide a higher performance solution to the market; in the early ’90s, such solutions were developed for VOD. But streaming prices were orders of magnitude of what they are today, so these solutions were not ready to scale. 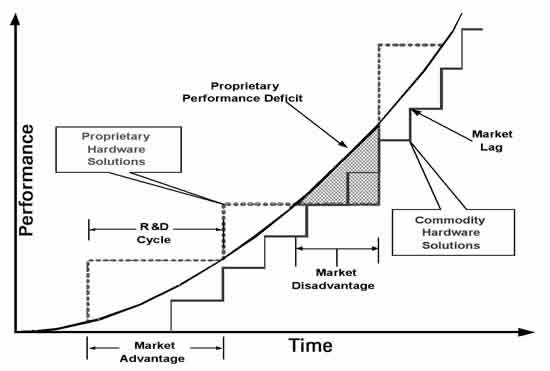 Today, thanks to the rapidly accelerating pace of processor performance, address space expansion, increase of on board memory, increase of I/O bus speed, and deployment of high speed NIC adapters such as 10GigE, the capabilities of standard servers have surpassed those of proprietary solutions. It is now feasible to use off-the-shelf servers to process and stream 10GigE’s worth of streaming content. In addition, 10GigE can be used to handle key system functions such as content propagation and resiliency within a distributed system. Because of the rapid product development cycles within the commodity server market, it is now also possible to develop a deployment strategy based on commodity hardware, and use software to enhance and differentiate service. Proprietary hardware solutions never leverage the volume economics of the commodity market, and lag behind commodity solutions in the adoption of new technology architectural innovations such as 10GigE. Conclusions 10GigE and rapid advances in server hardware are enabling operators to rapidly evolve their solution architectures for deploying scaleable IP TV and VOD services. Development cycles are much faster than proprietary hardware solutions, and hardware selection is also much more flexible. Switch, NIC and motherboard hardware prices will drop rapidly over the coming months and years. High speed, standards-based Ethernet switching architectures are already enabling network-centric, scaleable and fault tolerant solutions, giving operators the flexibility to deploy a range of architectures, from highly centralized to highly distributed, all feeding a high capacity edge network at the access edge. Paul Sherer is president and CEO of Arroyo Video Solutions. Reach him at paul.sherer@arroyo.tv.