Switched digital video (SDV) technology promises to change fundamentally how digital video is delivered over cable networks, enabling cable operators to offer consumers a wider variety of programming while effectively managing HFC network bandwidth. Although the prospect of delivering SDV services over an end-to-end Internet protocol (IP) network is an attractive long-term goal for cable operators, it is unrealistic to expect to realize this infrastructure without addressing the existing installed base of some 40 million MPEG set-tops that cannot decode a DOCSIS or IP stream. For this reason, during the past several years cable operators have been experimenting with delivery of SDV services over MPEG-based switching networks. A key hurdle that has limited the deployment of SDV services has been the absence of an open architecture that offers the system availability, scalability, performance and cost required to enable the wide-scale rollout of SDV over HFC networks to the existing installed base of MPEG-based set-tops. Over the past year, industry leaders have collaboratively developed a new, open SDV architecture. Discussed in the text that follows, this architecture contains the following major elements: staging processor, bulk encryptor, content routing network, edge-QAM (quadrature amplitude modulation) modulator, session and resource manager, SDV server, SDV manager and SDV client. (See Figure 1.) For more information on key SDV interfaces and features, please see the longer paper from which this article was drawn. 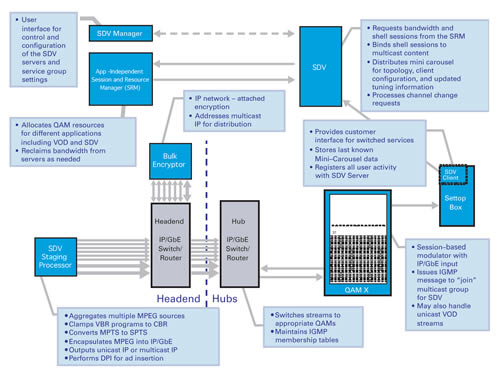 Staging processor In a typical headend, content is received from multiple sources, including satellite, terrestrial over-the-air broadcast, fiber transport, storage media, and IP data networks. The receiving equipment for these sources uses various physical connections and interfaces. The staging processor performs the following functions to groom sources for input to the SDV system: – Translates source interfaces to user datagram protocol (UDP)/IP encapsulated packets carried in Ethernet frames – Converts any variable bit rate (VBR) streams to clamped, or constant bit rate (CBR), streams and for some content may convert one bit rate to another – Converts multi-program transport streams (MPTSs) to single-program transport streams (SPTSs) – May perform digital program insertion (DPI) to insert local ads into the source content – May perform segmentation of program streams into separate events for storage on a media subsystem The output of the staging processor may be unicast or multicast IP. In the case of encrypted streams, the staging processor outputs a unicast IP stream bound for the bulk encryptor. In the case of an SDV stream for which encryption is not required, the staging processor may output a multicast stream directly into the switching network. Bulk encryptor Shared by multiple viewers, SDV streams are treated as broadcast streams for purposes of encryption. Since the encryption device is not aware of, and does nothing unique for, individual viewers, encryption of SDV streams is most effectively centralized in the headend rather than integrated into edge modulators and is most efficiently done with an IP network-attached bulk encryptor. The bulk encryptor is connected to a switch-router using Gigabit Ethernet (GigE) ports in bidirectional mode as shown in Figure 2. In this application, the edge QAM modulators are connected to the routed network either directly or remotely through other network and transport equipment. Clear data is sent to the bulk encryptor for encryption, and encrypted data is sent back to the network for distribution. 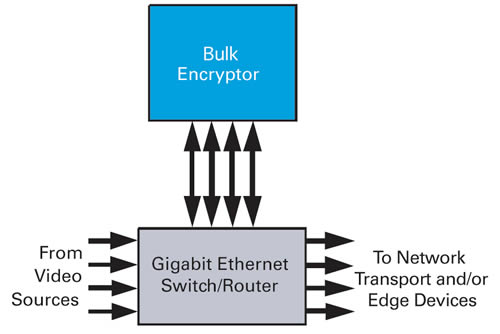 To address the existing installed base of MPEG set-tops, the described SDV architecture features an out-of-band signaling mechanism that is structurally consistent with the Packet Cable Multimedia (PCMM) and IP Multimedia Subsystem (IMS) architecture models for nonIP clients. However, the SDV architecture can be evolved to support IP-based clients and, in conjunction with the DOCSIS, PCMM and IMS architecture models, to provide a multi-service, multi-client architecture that enables "any source to any user" IP-based video delivery. The open architecture described here is designed to accelerate the development of technologies and solutions for delivery of SDV services over HFC networks; be more reliable, more cost-effective, and more scalable than existing architectures; and help evolve next generation networks to enhance cable operators’ competitiveness and position the cable industry for continued profitable growth. Luis Rovira is principal engineer and Lorenzo Bombelli is director, network architecture and strategy at Scientific-Atlanta; Paul Brooks is senior network architect at Time Warner Cable. They can be reached respectively at lu.rovira@sciatl.com, lorenzo.bombelli@sciatl.com and paul.brooks@twcable.com. This article is drawn from a paper delivered at the SCTE Conference on Emerging Technologies.