Readers understandably tire of hearing that "this is the year of ______." (Fill in your favorite, emerging technology.) It’s an expression that has a way of being repeated, year after year. Unlike multiple industry movements that glacially earned acceptance and implementation, however, switched broadcast (also known as switched digital video) has a plausible claim to that title. Just over three years past its most preliminary trials, it enters 2006 with commercial-stage deployments underway in multiple sites and considerable industry momentum behind it. The tale goes back just a few years before those trials, to the industry tradeshows at the turn of the century. Technology entrepreneurs reluctant to spook cable operators with the concept of dynamically switching live programming offered several modest proposals. As it happens, operators received these ideas enthusiastically, in part because they had been contemplating such technologies for a long time. As the years progressed, upgraded 750 MHz and higher plant have quickly saturated with content and services, thus requiring more bandwidth solutions. The realization of a two-way plant capable of directing digital content toward addressable nodes has advanced switched broadcast from theory to solution for this situation, and the industry is responding with deployments. This enables continuing growth of bandwidth-hungry initiatives such as simulcasting, high definition TV (HDTV), video on demand (VOD), voice over Internet protocol (VoIP) and faster broadband. The stage has been set for today’s expansion of switched broadcast by several pilot deployments during the last several years, which have proven the viability and benefits of the technology, and through which the architecture has matured toward a robust and open state. And switched broadcast is not resting on its laurels. With bandwidth savings established, there is an ongoing march to explore additional benefits such as targeted content delivery, instant channel changing, and detailed analysis of program and viewing trends. Early deployments Late in 2002, the first pilot deployment of switched broadcast was installed for proof of concept. The point was to prove that MPEG-2 streams could be switched. A few nodes were selected within which certain programs were carried only when subscribers were selecting them with their set-top boxes. In order to speed deployment, the system’s existing management server for digital programming was leveraged to monitor and respond to subscriber behavior. The concept was successfully proven, including capability to integrate with installed systems such as programming guides, conditional access (CA) and headend management. However, it was also clear that significant advances had to be made for the technology to achieve speed and scalability for more widespread deployments. This required development of robust server systems more specifically dedicated to optimizing switched broadcast performance. As switched broadcast solution components matured, several new sites emerged for pilot deployments in 2004. These encompassed the range of industry conditions, from 550 MHz to 750 MHz, with multiple CA and set-top box environments, and varying node sizes. Objectives were also widespread, including validation of transparency to subscribers, robustness of operation and magnitude of spectrum conservation achievable. These deployments were remarkable in revealing how far the technology had advanced in less than two years. Hundreds of subscribers received their digital programming on a switched basis without being aware of it. There were no outages or complaints throughout the deployment periods. The responsiveness speed issues of earlier trials were overcome, and in fact some channel changing sped up. The most important outcome of the 2004 deployments was verification of the bandwidth savings potential of switched broadcast. Statistical tendencies revealed that viewership at particular times often clumped around particular programs, so in aggregate the majority of digital programs were not being watched within any node’s service area at any time. As a result, deployments can be configured such that the amount of stream capacity being allocated to switched broadcast is less than half the number of programs being switched. (See Figure 1.) 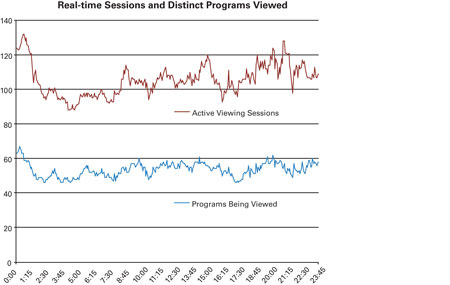 Because the switched broadcast management server tracks and responds to every tuning request from subscribers, the 2004 deployments accumulated illustrative records of demand and program performance. For example, a noticeable dip in cumulative demand occurred on Dec. 24 and 25, and what demand there was on those days was particularly aggregated to a few programs such as holiday and college football fare that have become part of those days’ family ceremonies. The programming data revealed an early indication of the technology’s value beyond just bandwidth conservation. Operators could determine true demand for each programming network and behavioral tendencies such as how quickly subscribers change channels. Such data could be invaluable for business initiatives such as carriage negotiations and service launches. Commercial viability The 2004 deployments revealed the need to address a few more issues, such as how to manage nonresponders, those subscribers whose channel change requests are not reliably transmitted upstream. In addressing these remaining issues, a clear, solution architecture for switched broadcast has emerged based on modular components with standards-based interoperability. The management server remains the brains of switched broadcast. It monitors all sessions and subscriber tuning. When a program is requested, the server determines whether that program is already being watched within the subscriber’s node’s service area. If so, the subscriber transparently tunes to the session in progress, and if not, a new session is determined and communicated to other solution components. Client software that can be dynamically downloaded to any digital set-top box informs the server of program requests and tunes to the frequencies and digital programs as instructed by the server. The switching of programs occurs through combinations of IP Ethernet and quadrature amplitude modulation (QAM) devices, which can be integrated into either joint or separate systems. These devices receive the complete payload of incoming digital programming and follow server instructions as to which programs are delivered at which frequencies to which nodes. Because multiplexes of switched broadcast programming are dynamic within each node, this is most economically and simply accomplished by multiplexing constant bit rate (CBR) streams, just like in VOD. An additional system is required to support this, which clamps incoming variable bit rate (VBR) streams to constant rates before they are switched. (See Figure 2, as well as a related article in the February 2006 issue of Communications Technology.) 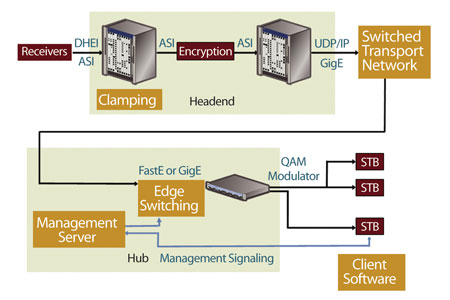 The maturation of switched broadcast architectures has been occurring at an opportune time for the industry. With bandwidth initiatives such as system upgrades and conversion to 256-QAM well underway, new solutions are required. Switched broadcast appeals as an alternative that leverages existing plant with great efficiency in capital and effort required. With commitments and deployments underway by top operators in multiple sites, the technology has now commercially arrived. As operator demand increases and architectures clarify, the door opens for multiple vendors to enter the switched broadcast arena and specialize in the architectural components that best leverage core competencies. As this occurs, new partnerships and collaborations arise that can deliver additional benefits based on the technology. Additional benefits Switched broadcast is arriving at an opportune time not just in terms of internal dynamics of the cable industry, but also in terms of the competitive environment. Direct broadcast satellite (DBS) is moving forward with aggressive HDTV and local content initiatives, and new challenges are felt from video developments by telecom operators and Web-media ventures. The cable industry is competitively well-positioned as it realizes initiatives for next generation network architectures. Switched broadcast is a vital element within this. Once live programming is switched, that can next be extended to dynamic allocation of resources among multiple stream types, including HDTV and digital audio, and eventually DOCSIS IP content can be part of these multiplexes. This trend supports even greater bandwidth, data capacity and resource efficiencies and can also enable new subscriber functionality through the cohabitation of multiple content types. In parallel with advances toward next generation network architectures, there is also early experimentation with new concepts within switched broadcast through doing so on a unicast basis. This means that each active subscriber gets a constantly dedicated stream, instead of sharing of a stream by multiple subscribers who are watching the same program within a node’s service area. Potential advances achievable through switched unicast include: *Extending the concept of rate shaping to switched broadcast for efficiency gains by creating multiple data rate profile versions of streams and selecting based on availability for individual subscriber’s session *Targeting content based on individual subscriber’s demographic profile and consumption history such as personalized advertising that can be more lucrative on a per-eyeball basis *Instant channel changing because each subscriber’s individual stream can be delivered with the right MPEG frame first for immediate resolution, and no incremental set-top box tuning is required *Opening choice of any device type or CA methodology even within node service areas, since each subscriber receives a unique stream that can be encoded and encrypted per the subscriber’s compatibility *Complete data records of viewership and program performance without relying on inexact third-party services Just five years after whispered speculation, switched broadcast has arrived as a vital cable industry initiative frequently discussed by the industry’s top executives in their financial reporting calls. Capabilities to conserve bandwidth are well established, and progress toward next generation advances is underway. Architectures are trending towards greater openness and multi-vendor collaboration. And with increasing switching of all content, including live programming, the possibilities of new functionality are emerging which promise even better profitability and competitiveness. Seth Kenvin is vice president strategic marketing, and Biren Sood is vice president product marketing for BigBand Networks. Reach them at Seth.Kenvin@bigbandnet.com and Biren.Sood@bigbandnet.com.

Cable One and Hargray have asked the FCC for streamlined consideration of Cable One’s purchase of the 85% of Hargray that it doesn’t already own, saying it will be seamless to consumers and will not result