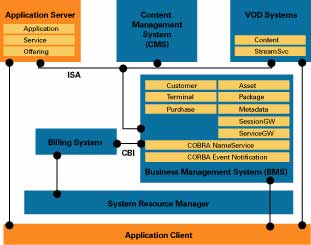 Manufacturing partners of Time Warner can review the set of ISA application programming interfaces (APIs) and fairly easily integrate applications for a Time Warner Cable site. The architecture also enables the easy evolution of individual components, such as the gradual transition of billing systems to being more real-time two-way. Many of the ISA interfaces have been adopted wide-scale. The set-top signaling interfaces, for example, are used by most cable industry implementations across North America. In addition, CableLabs adopted the interface specification that enables VOD delivery and the initial metadata specification for video. Most interesting is how the technology has helped Time Warner accomplish such goals as separating VOD streaming from storage, building a BMS with a vendor other than their server vendors, and launching new services such as Start Over TV. Interoperability—NGOD More recently, Comcast has taken a lead in defining interface definitions, as well. Comcast has named the effort NGOD. (See Figure 2 for numbering and depiction of NGOD specifications.) 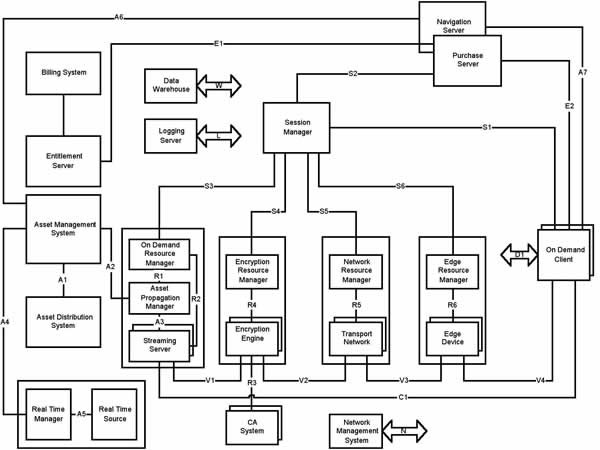 Although the name NGOD includes `on demand,’ many of the interfaces actually standardize the interfaces to non-on-demand components. The goal of NGOD is to enable Comcast networks to scale easily. Many next-generation network goals require various network components to talk to each other in one consistent manner. This is exactly what NGOD describes. If each component has the same physical and logical interface to control and access a QAM modulator, for example, then Comcast can easily launch new services that need to access QAM modulators. A bit more complex is the management of all of the applications and network components. Therefore, NGOD also describes components that will manage data capacity, entitlements, advertising management and more. “The key is intelligent resource management, having a control plane that manages these resources,” says Comcast CTO David Fellows. “The goal is to have a services delivery platform that enables us to quickly deliver services and offers us flexibility with voice, data and video.” Comcast’s control plane is an application-enabling platform called Bedrock, developed in collaboration with partners such as JacobsRimmell. Beyond a flexible software platform, what Comcast is focused on is interesting and appealing applications: In October alone, Comcast had 150 million VOD streams, of which 30 million were launched via clicks on their portal application. Next-gen and quad play The popularity of such applications is an appropriate note on which to end this survey. We have focused here on the technology advances in our network components, but the future also rests upon consumer demand for the industry’s four core businesses: video, data, voice and wireless. As the Sprint Nextel joint venture with a consortium of cable operators demonstrates, the industry at large is poised to become a genuine quadruple-play service provider. How to manage the handoffs between cable and wireless infrastructures is yet another technical work in progress. The overriding goal, however, is clear: not to have each service remain independent, but rather to mix services across multiple devices. “If we do it right,” says Comcast’s Fellows, “we can have everything run as one network.” Having the right platform, in turn, will allow us to come up with the new, creative applications that we—and our customers—will be enjoying in the future that we’re now creating. Yvette Gordon-Kanouff is SCTE chairman of the board and SVP of Corporate Strategy, SeaChange International. Reach her at ykanouff@schange.com For more quotes on the industry’s next generation network initiatives, see Backtalk. Sidebar The In-Home Network Whether it is DOCSIS 3.0 or advanced compression algorithms, methods for improving bandwidth efficiency and flexibility reach down into the home, which has become an increasingly complicated endpoint. “It’s not just the network and digital rights management (DRM); it’s getting content and features from the TV to the PC, from the telephone to the TV to the PC, and more,” says Charter Communications CTO Wayne Davis. Managing more digital services at lower cost points has been a persistent theme in this area. Charter, for instance, was an early champion of enabling various conditional access (CA) solutions to help drive down the cost of the set-top box. Much of that effort has now evolved to an industry-wide initiative on downloadable security, which promises additional CA flexibility and cost reduction. Charter and Samsung are currently working on a “set-back” device that uses both OpenCable Application Platform (OCAP) and DOCSIS set-top gateway (DSG). “The key is having a low-cost set-top,” says Davis. That is especially critical if the endgame is, indeed, a digital set-top not only in every home, but also for every TV set. At the same time, the value of a centralized home gateway or media center likewise grows in the face of rising complexity. Davis notes the “unwieldy” scenario of “having 15 devices on 15 provisioning systems, with 15 different installations.” Time Warner would like to see an OCAP TV offering, too. Mike Hayashi, senior vice president of advanced engineering, is very clear on this goal, having spent much of his team’s time on OCAP and downloadable security. “OpenCable is a major focus for us, as it should be,” he says. Optimally, Hayashi hopes for a CableCARD-based OCAP TV running Time Warner’s EPG.

Fuse Media is beta launching streaming service Fuse+ on Amazon Fire TV and Apple TV . The service will be fully and officially launched later this year. With the official launch, the streamer will add