Here are some findings that have cable subscribers concerned: Pay-TV bills continue to increase by 6 percent, year-over-year as consumer-spending power remains flat. 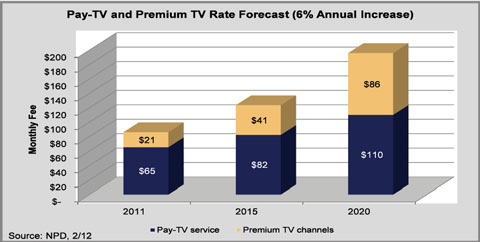 According to market-research firm The NPD Group, the average pay-TV subscription for basic pay-TV service and premium-TV channels in the United States reached $86 in 2011. As TV program licensing fees have risen, pay-TV monthly rates have also grown an average of 6 percent per year. If nothing changes, NPD expects the average pay-TV bill to reach $123 by 2015 and $200 by 2020.

According to information from NPD’s recent Digital Video Outlook report, 16 percent of U.S. households don’t use any kind of pay-TV services, and here’s one reason: The sharp rise in housing vacancies due to the mortgage crisis alone has led to five million fewer U.S. households viewing pay-TV services. However, total U.S. pay-TV subscriptions haven’t declined much, due to bulk-service pay-TV contracts with apartment complexes and homeowners’ associations that have allowed pay-TV operators to retain subscriptions in vacant homes.

“As pay-TV costs rise and consumers’ spending power stays flat, the traditional affiliate-fee business model for pay-TV companies appears to be unsustainable in the long term,” notes Keith Nissen, research director for The NPD Group. “Much-needed structural changes to the pay-TV industry will not happen quickly or easily; however, the emerging competition between S-VOD and premium-TV suppliers might be the spark that ignites the necessary business-model transformation of the pay-TV industry.”

The group also says pay-TV cord cutters reported are canceling their subscriptions primarily because of economic considerations; however, they are still accessing TV programming from free-to-air broadcast and free Internet TV as well as via lower-priced over-the-top (OTT) services like Netflix.

“Despite the plethora of OTT options for movies and TV, most consumers want their pay-TV providers to be central and relevant to the acquisition and viewing experience,” adds Russ Crupnick, senior vice president/Industry Analysis for The NPD Group.

“Pay-TV providers offer a convenient, one-stop shop for subscribers, and the majority of customers like it that way,” says Crupnick, who also provided a warning: “There is an open window for the industry to meet consumer needs and become to television what iTunes is to music; however, there is also a definite risk if pay-TV providers don’t capitalize on the opportunity — and soon.”

CNN beat out Fox News and MSNBC during Wednesday’s inauguration of Joe Biden , counting just under 10 million total viewers during the oath of office and