Back to December 2005 Issue 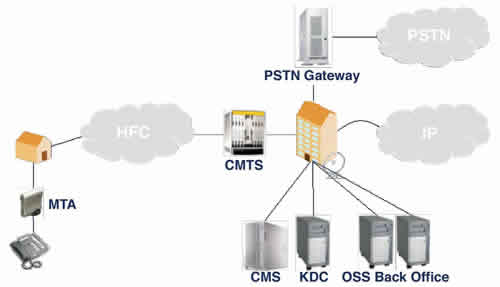 The procedure continues in the same way as normal BPI operation as described earlier. The important difference with this procedure is that the cable modem’s MAC address is now authenticated to the CMTS: Because the manufacturer signed a certificate that links the MAC address to the public key, and because only that modem can have the matching private key, only that cable modem will be able to decrypt the message back from the CMTS, so only that cable modem can have that MAC address. Security in PacketCable PacketCable is the set of specifications that defines all interfaces (security, signaling, quality of service and so on) to offer telephony services over the HFC network using voice over IP (VoIP) technology. The architecture is shown in Figure 2. The call management server (CMS) is the component that is responsible for all decisions regarding the telephony signaling. The devices placed at the customer premises (multimedia terminal adapter, or MTA) also contain a unique digital certificate to authenticate them to the different servers in the network. Because the architecture contains multiple servers for the different functions, the authentication for the different systems is centralized in the key distribution center (KDC) server, and Kerberos is used as the protocol to make this system scalable. Within this architecture, the different servers also authenticate to the MTAs using their own digital certificate hierarchy. By authenticating the servers to the MTAs, a hacking attempt by spoofing a server is prevented.

Because BPI uses DES encryption (which is considered to be weak) and is only on the HFC-network, the voice packets themselves are encrypted using the Advanced Encryption Standard (AES) protocol. The call signaling itself is protected using the IPsec standard using triple-DES (3-DES) as the encryption protocol. Because billing is an important aspect of telephony services, the PacketCable architecture bases all billing on information obtained from trusted (that is, devices within the premises of the operator) devices. Mechanisms are also available that prevent users from using QoS on the cable network (such as so-called half-calls) without properly paying for it. Enabling security Using encryption and digital certificates creates potential interoperability problems when deploying components from different manufacturers and when these components are not fully compliant with the DOCSIS or PacketCable specifications. Therefore, field engineers switch off the security mechanisms many times “to get things working.” While this is useful to identify specific issues that are related to other parts of the system, it is bad practice to leave the operational network unprotected because it poses significant risks to the services and the business. By properly implementing the mechanisms defined in the DOCSIS and PacketCable (and Euro-DOCSIS and Euro-PacketCable) standards, operators can protect their networks from theft of service and privacy attacks. Too many times, the security mechanisms are switched off because they are considered burdensome. Neglecting security, however, only creates additional problems. The burden of having to recover from one successful attack on the network might be all the heavier. Wim De Ketelaere is CTO and Luc Martens is CEO for tComLabs. Reach them at deketelaere@tComLabs.com and martens@tComLabs.com.

It has been two weeks since the Senate approved a $1 trillion version of President Biden ’s infrastructure package, but it will be quite a bit longer before broadband providers start receiving pieces of the