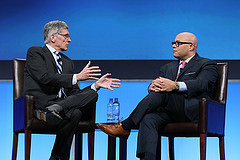 Yeah, he went there. During his Cable Show speech Wed morning, FCC chmn Tom Wheeler roused the Title 2 monster from under the bed and made abundantly clear to the cable industry that he’ll sic the beast on everyone if broadband providers don’t behave. "If someone acts to divide the Internet between haves and have nots, we will use every power at our disposal to stop it," he said. "And I consider that to include Title 2… We will not allow some companies to force Internet users into a slow lane so that others with special privileges have superior service."

Got it? Of course, NCTA chmn Michael Powell took it all in stride during the Q&A, telling Wheeler that while "the cable industry might disagree that we’re an impending threat to the network… we look forward to working with you constructively as you try to find that right balance that serves the public interest." It was all perhaps a bit of diplomatic and political theater for the chairmen (they’ve known each other for 20 years and talk all the time). Indeed, Wheeler’s comments were more aimed beyond the convention hall toward the public at large as he faces a backlash over a notice now circulating at the Commission—one that some open Internet advocates charge would let cable ops and others carve out fast lanes for online content providers willing to pay those tolls (Netflix recently inked interconnection deals with Comcast and Verizon).

Wheeler said the notice will seek input from all sides but reiterated that "all options are on the table" and told those hoping for an advantage to "put away the party hats." His ultimate goal: "I’m interested in results. The Commission has been trying to do something for almost a decade. It’s time to get the job finished. We’ve been waiting long enough." Wheeler also pointed out that the courts have affirmed the FCC’s authority to intervene to ensure an open Internet and that "we will follow the court’s blueprint for achieving this. And I must warn you, that we will look skeptically upon special exceptions."

Wheeler also challenged cable to do more to wire schools and libraries by noting the industry’s success reaching commercial customers: "If you can configure good service and good deals to SMEs, you can and should do it for our schools and libraries." And in something likely to draw cable opposition, Wheeler also raised the specter of preempting state laws that restrict municipal broadband. "I understand that the experience with community broadband is mixed, that there have been both successes and failures," he said. "But if municipal governments—the same ones that granted cable franchises—want to pursue it, they shouldn’t be inhibited by state laws. I have said before, that I believe the FCC has the power—and I intend to exercise that power—to preempt state laws that ban competition from community broadband."

Be sure to check under the bed tonight…