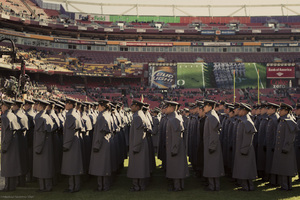 Honor. Courage. Commitment.
Those are the two slogans of the U.S. Army at West Point, and the Naval Academy, respectively. The two great institutions prepare the nation’s top individuals for life and service to their country. No team is more important to them than the United States and the safety of the people. Once a year, however, the two squads become divided for a three-hour period of time fighting for bragging rights in the biggest football game of the year, the Army-Navy game.
With a documentary on the 112-year-long rivalry set to debut Wed at 9pm on Showtime, the premium net hosted more than 100, including many from the Army and Navy, at a special screening of “Game of Honor” Tues at the Newseum in D.C. High expectations were evident for a film that is trying to capture a long standing tradition that only few truly understand. “If we can please this audience, then we know we’ve done something good here,” said Pete Radovich Jr., the film’s director. “Our goal was to highlight the greatest athletes in America.”
Judging by the audience’s reaction, Radovich and crew succeeded. The documentary brings those who are not directly involved with the rivalry an inside look at the rites of passage the kids go through, their preparation for the football game, and foreshadowing of how their futures could end up. The rivalry is not just a football game, and it epitomizes everything that is right about the nations finest.
The film takes the viewer from the journey of a typical Midshipman or Black Knight from Day One where they say good-bye to their folks and begin intense training instantly to a veteran’s return from Afghanistan where he is recovering from losing his legs in combat. The student athletes get no perks or special rules, as they go through intense scrutiny and training just like the rest of their fellow recruits. Whether winning or losing their regular season football games, the expectations of class and sportsmanship are through the roof. Pride in each academy is always present, and as the year goes on the athletes are always keeping the big game in the back of their mind, after every other regular season game the teams shout “Beat Army” or “Beat Navy” after the singing of their alma mater. When the big game arrives, the intensity is uncanny, unlike any other football game. The entire student bodies of both schools dresses in their uniforms and attend the game. The nation’s commander in chief is present, along with the eye of the entire nation watching. The two squads lay it all on the line.
After it is all over, the two teams gather together to again become one, the United States military. Showtime captures the significance of this moment, allowing those on the outside to understand how incredible these future members of the military are. The senior athletes are done playing, and they return back to school to get their deployment assignments upon graduation.
Through the holiday season, it is a good time to reflect and realize the good fortunes of living in such a great nation. Thanks to all men and women serving.

Fox Life has been on life support for years, with the end is almost here. Disney plans to shutter the Spanish-language lifestyle network in the U.S. on March 31. It was one of the