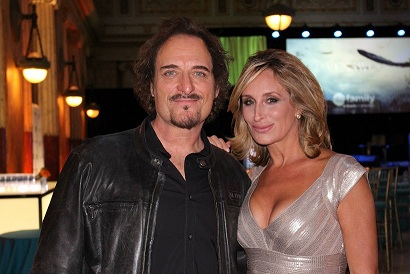 With the company’s political ad business growing every election cycle (from 2.3 million spots a decade ago to more than 9 million spots in 2012), it only makes sense for NCC Media to host its upfront in DC (for the first time). At the iconic Union Station Thursday night, to be more exact, walking distance from the US Capitol. Between performance by Sara Bareilles and special appearances by FX’s “Sons of Anarchy” star Kim Coates and Sonja Morgan from Bravo’s “Real Housewives of New York City,” Andrew Capone, senior vice president of marketing & business development, used the event to announce the company’s new political ad tools: Smart Dashboard and Smart Map 2.0.
With the midterm elections on the horizon, NCC Media aims to provide better voter targeting with Smart Dashboard. The service “delivers campaign recommendation based on research data and voter concentration,” Capone said. “Whether it’s California Democrats or Florida Republicans or anything in between, Smart Dashboard provides better reach and pinpoint accuracy,” he said. The goal is to guide media buyers to the right networks and programs to target any voter, he said. The company is putting final touches and will make it available in time for the midterm elections, he told us at the event.
Meanwhile, “when one election can be won or lost on a few votes, increasing reach and accuracy is pretty important,” Capone said. In addition, “identifying where targeted voters live is critically important when a single county can decide an election.” That’s why the company upgraded its Smart Map solution. Launched in 2012, the service offers instant access to an interactive tool that creates thematic maps illustrating cable coverage in a political district, state, or market. With Smart Map 2.0, “we align voters with cable systems,” allowing media buyers to see where high concentrations of voters live, Capone said. In many cases, there are “huge chunks of markets/DMAs that are outside state boundaries,” he said. “A media plan may deliver millions of impressions to people that will never be your voter because of where they live,” he said. Example: 1 in 5 people living in the DMAs that cover Ohio, live outside the state lines. Smart Map 2.0 can identify cable systems covering Ohio and only Ohio. Leveraging that and in combination with full DMA schedules can make campaign media investments go much further, according to Capone.
The company scored a partnership with DISH last year, combining ad impressions in more than 3 million additional DISH homes with those of NCC owners Comcast, Cox and Time Warner Cable in 25 of the largest markets. With cable, satellite and telco as partners, NCC expects to reach the top 50 markets by 2016, Capone said.