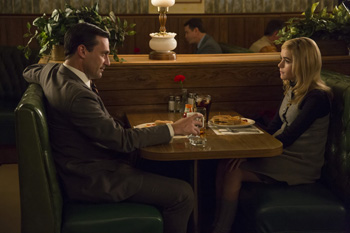 Watching ep 2 of the final season Sunday night—AMC no longer distributes Mad Men in advance to critics, making writers’ Sunday nights and Monday mornings a bit like Don’s predicament, loafing in bed, pass the Ritz crackers, please, and don’t mind the roach crawling in the corner—it was interesting to see how many themes we noted last week figuring prominently in this week’s A Day’s Work.