Over the last few years, we’ve been witnessing the emergence of a new and exciting medium for carrying digital video to the customer premises. In addition to satellite, cable and terrestrial, broadband data networks supporting Internet protocol (IP) have gained acceptance as a suitable and profitable means of delivering video. Whether one calls it IP television (IPTV), broadband TV or TV over digital subscriber line (DSL), it always refers to the delivery of digital content through the customer’s broadband connection, which was formerly used only for high-speed Internet (and sometimes for IP telephony). But as the deployments of IPTV solutions have begun, and in spite of the fact that its success seems imminent, it’s far from achieved. There is currently no standardized solution for an end-to-end system to deliver rich content over IP. Only a few aspects of such a system have been deeply studied and standardized, and a lot of issues, new to both the broadcasters who produce the content and to operators ensuring its delivery, have yet to be addressed. IPTV today These four letters are on the lips of every carrier, content provider, and consumer electronics manufacturer out there. Indeed, IPTV was still unknown some five years ago. It has now, however, become the most fashionable way to deliver video to a customer. What makes this solution so trendy? We will not go through all the advantages of IPTV here, but flexibility, ease of deployment, interactivity and triple-play readiness are cited often. Of course, the drawbacks are rarely raised, and a few people have spoken about the lossy nature and the range problems of DSL access, not to mention the constraints on the operator network. Nevertheless, the number of deployments, be they commercial or simple trials, is huge for such a young technology, and it keeps increasing. Table 1 illustrates some of the most promising ones in terms of number of potential subscribers. 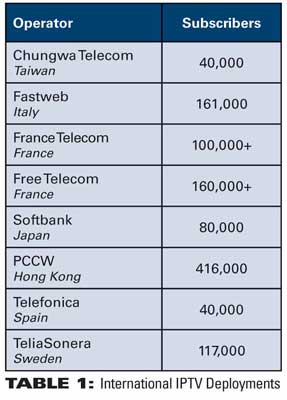 It looks like a success; it tastes like a success. But below the surface of these figures lies the reality. It’s one of battalions of network engineers struggling to maintain a network with tools that are as young as the IPTV solution itself, and legions of system engineers at the equipment providers desperately trying to make machines that were not designed to work together interoperate. It’s scores of customers bombarding the hotlines with complaints. And inevitably, the same excuses arise: The solution is immature, it still needs some adjustments, and so on. But at that point, with millions of customers in place, it is not adjustments that are needed, but a real framework in which IPTV solutions can be implemented and deployed. IPTV needs standards much like satellite or cable networks—probably more so because IP networks were not originally designed for television. Standardizing IPTV Setting a standard for IPTV would be difficult at best. There are multiple areas to cover because IPTV is a very broad subject, and the medium was not intended to transport audio and video when it was created. Moreover, some specific features of this medium allow new services while outdating some of the former schemes based on broadcast. Technical overview The main advantage of IPTV, and in some aspects its main drawback, is that it relies on an existing IP network. On this network, the operator has already deployed high-speed Internet access and may also have put in place IP telephony. Assuming that the core network has sufficient data capacity and that the access network is also suitably proportioned for carrying a video stream, IPTV deployment roughly consists in adding new servers, configuring the network properly, and giving to the customer the proper equipment to receive and decode the stream (an IP set-top box). All this equipment, which would ideally be bought from different providers to maintain the strategy of divide and conquer, will have to interact with each other. Standards will help accelerate implementation of the solution, as well as ensure its operation and the quality of service it will deliver. Many areas are to be covered, and without tackling the physical aspects of the system, we can list the following items. (See Figure 1.) 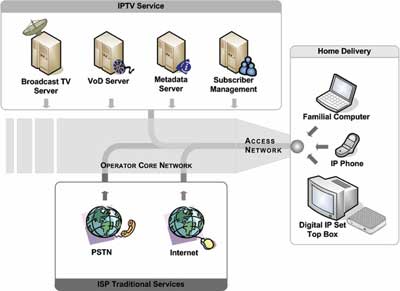 Evoca and Unmudl Team Up for Learnings