It’s a well-known adage in the cable industry that competition is the primary driver of new services adoption by operators. With Rupert Murdoch poised to take control of DirecTV, competitive interactive TV services may soon be available to North American satellite TV subscribers, based on the success of Murdoch’s BSkyB satellite operations in the United Kingdom and elsewhere. And first up on the short list of interactive TV applications is games. The cable industry, with its upgraded two-way hybrid fiber/coax (HFC) networks and ability to leverage powerful, centralized servers to process interactive applications, is well positioned to satisfy the appetites of consumers to play games on television. The immense popularity of console game platforms was underscored last September when Sony Corp. shipped PS2 console number 60 million. It is estimated that gaming revenues via interactive television will be as high as $2.7 billion by 2006. By utilizing the robust upstream path, whether conventional cable return channels or a Data Over Cable Service Interface Specification (DOCSIS) return channel, together with a centralized server approach, compelling interactive, PC-style game experiences can be delivered to subscribers today without replacing the tens of millions of legacy digital set-top boxes already deployed. The benefits of both the conventional cable return and DOCSIS return channels are worth a look as interactive TV gaming applications emerge as a key opportunity for cable. Reverse data channels Two key data transmission specifications are in use today for return channels in cable HFC networks: Digital Video Standard-178 and Digital Video Standard-167, otherwise known as SCTE 55-1 2002 and SCTE 55-2 2002, respectively. General Instrument Corp. (now Motorola) originally developed SCTE 55-1, while SCTE 55-2 was developed by the Digital Audio Visual Council (DAVIC) and adapted by Scientific-Atlanta and others. One early application for the upstream path was to support impulse pay-per-view (IPPV) services for advanced analog set-top boxes. In the digital era, the cable network’s reverse path is used not only for IPPV data, but also for the VCR-like commands (such as play and pause) of video-on-demand (VOD) services. However, the reverse path is robust enough to accommodate many interactive game applications residing at the headend and served out to legacy digital set-top clients. Even interactive games that require large numbers of keystrokes or clicks to be transmitted upstream to headend servers can use the cable return channels without significant delays. The Aloha protocol SCTE 55-1 uses a 256 kilobits per second (kbps) data rate in the upstream path and includes both a "polling" channel and a contention-based Aloha channel. Aloha is a protocol developed at the University of Hawaii for radio communications between the Hawaiian Islands. Aloha defines a contention-resolution scheme to allow several users of a shared network to transmit using the same channel. In a cable network, when a set-top box sends a message via Aloha, it waits for an acknowledgment from the headend. If no other set-top is using the Aloha channel at that specific time, the message is received. If two boxes are sending messages at the same time, however, there is a chance one or both of the messages won’t get through. With Aloha, if a set-top does not receive a "message-received" acknowledgment from the headend, the set-top re-sends after a random time period. The second box, if it also did not receive acknowledgment of its message, would re-transmit again at a different random time. Aloha works in real-time and is suitable for large amounts of users who need the channel a small percentage of the time. It was not designed to support large numbers of simultaneous users. Experts note that a pure Aloha system can be used to about 18 percent of total capacity. That is, 18 percent of host devices simultaneously can send data before collision delays become problematic. (See Ciciora, Farmer, Large and Adams, Modern Cable Television Technology.) Aloha can send data upstream with about 150 milliseconds (ms) of latency, exclusive of infrared remote control delays between users and set-tops. Slotted Aloha Although both SCTE 55-1 and SCTE 55-2 use quaternary (or quadrature) phase shift keying (QPSK) for modulation, the SCTE 55-2 return channel is distinguished by the use of a contention-resolution technique-time division multiple access (TDMA)-which establishes specific time slots to transmit data. Because of this, the transmission protocol of SCTE 55-2 is referred to as "slotted" Aloha. The most common upstream data rate of SCTE 55-2 slotted Aloha is 1.544 Mbps with about 100 ms of latency. (See Figure1.) Slotted Aloha also includes error correction (as does Aloha). Because of the reduced contention of a slotted Aloha channel, the protocol can be utilized to about 37 percent of capacity, according to Ciciora, et al. 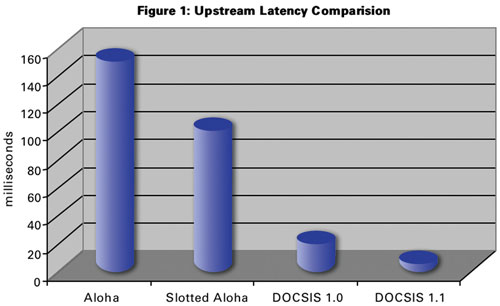 The possibility of high numbers of subscribers simultaneously using the return channel on a cable system’s HFC network is relatively low, making Aloha and slotted Aloha good choices for typical upstream traffic such as sending key clicks or remote control commands. For most single-user and basic networked interactive games, the standard cable return channel works fine in conjunction with a centralized server executing gaming commands. With headend-based interactive application platforms, session initiation and key click pass-through can require less than 10 bytes per message, allowing interactive applications, VOD and IPPV services to co-exist on the cable return path. With headend-based platforms, the set-top client transmits messages through IP sockets via the upstream path, with each message wrapped in user datagram protocol (UDP) or transmission control protocol (TCP) packets for transmission to and from the headend. DOCSIS return channel The DOCSIS return channel is a robust, full-featured transmission path engineered for large numbers of simultaneous users expecting extremely low network latencies. Importantly, upstream latencies as low as 5 ms are possible with DOCSIS 1.1. With DOCSIS 1.0 latencies usually measure 20 ms. Both specs are capable of up to 70 percent efficiency or throughput rating. For systems with heavy return path usage, with hundreds of subscribers simultaneously playing low-latency games, DOCSIS is a powerful protocol. Like traditional return channels, the DOCSIS return channel takes advantage of the node architecture that supports small populations of users sharing one frequency, but it also supports both QPSK and 16-QAM (quadrature amplitude modulation), the latter affording greater spectral efficiency. DOCSIS 1.x supports upstream data rates of up to 10.24 Mbps. DOCSIS 2.0 supports even higher throughput in the upstream channel through the use of advanced modulation. DOCSIS also provides a flexible mix of contention- and reservation-based upstream transmission schemes at the media access control (MAC) layer. DOCSIS 1.1 provides for upstream quality of service (QoS) management through service flows, which can be applied to individual applications, such as interactive games, particularly games in which the speed of response significantly impacts the game play experience. Transmission efficiency also is enhanced in DOCSIS 1.1 through packet payload header suppression. Combined with upstream scheduling and session establishment, DOCSIS 1.1 and 2.0 give the headend engineer a rich set of tools to optimize return path transmissions for applications such as multiplayer, networked gaming. DOCSIS, when paired with a centralized server processing gaming commands, easily accommodates the rapid-fire response times of sophisticated "twitch" games such as Quake, which generally tolerate a top latency of 75 ms. DOCSIS games The simplest way to take advantage of the DOCSIS return channel for low-latency interactive gaming applications is by placing a DOCSIS cable modem inside a set-top. Another option, which enables operators to incur incremental expense only as new games subscribers are added, is an infrared (IR) adapter for a cable modem, which uses the DOCSIS return channel to transmit upstream interactive application commands to the headend. A reference design has been developed for a low-cost "dongle" that connects to the USB port of a cable modem. The device uses an embedded processor to packetize commands sent by a subscriber’s remote control. Under this scenario, subscriber commands from an IR remote are sent to the dongle/adapter and then transmitted via the DOCSIS upstream channel to the headend, where the centralized platform processes the commands, tunes the subscriber’s digital-ready TV or set-top box to a hidden channel, and sends interactive content, such as a game screen display and refresh, downstream in MPEG-2 video. The subscriber’s responses are sent back upstream to the headend via the DOCSIS modem adapter. Centralized processing By loading and serving game titles off a powerful Intel-based server in the headend, centralized platforms eliminate local set-top storage requirements and complex software integration issues in the set-top. Centralized platforms that utilize the MPEG-2 video and AC3 audio decoders already in digital set-tops to display game content enable the use of legacy digital set-tops to deliver a rich interactive experience to users. Whether operators choose to employ cable return channels or the DOCSIS return channel, interactive applications running from centralized servers can greatly ease the implementation of complex interactive games. The capacity of the return path options available to cable and the huge installed base of digital set-tops capable of processing server-based interactive games, gives cable operators a key strategic advantage over DBS. The vast catalog of games already developed for the PC can be delivered to DCT-2000 and Explorer 2000-class set-tops today-a capability that checkmates the competition. Sources: Modern Cable Television Technology, 2nd Edition, Walter Ciciora, James Farmer, David Large, Michael Adams, Morgan Kaufmann, November 2003. OpenCable Architecture (Fundamentals), Michael Adams, Cisco Press, November, 1999. Mitchell Askenas is vice president, advanced product development for ICTV. Email him at mitch@ictv.com Bottom Line Cable operators can use their HFC network’s robust upstream path, whether conventional cable return channels or a Data Over Cable Service Interface Specification (DOCSIS) channel, together with a centralized server approach to offer compelling interactive, PC-style games. These interactive games can be delivered to subscribers today without replacing the tens of millions of legacy digital set-top boxes already deployed. Such applications can be a powerful weapon in the fight against satellite.