"Enterprise router sales in North America are down 10 percent sequentially, but up a promising 8 percent from the year-ago first quarter, by far the best regional performance of the first quarter," explains Matthias Machowinski, directing analyst/Enterprise Networks and Video. "Meanwhile, economic trouble in Europe is clearly visible, with sales falling both sequentially and from a year ago, and the situation is unlikely to improve soon, given the uncertain political environment and doubts over Greece’s stay in the euro. In China, where router sales popped last quarter, the market dropped 20 percent sequentially, and worryingly, year-over-year growth slowed to a crawl, up just 2 percent."?? 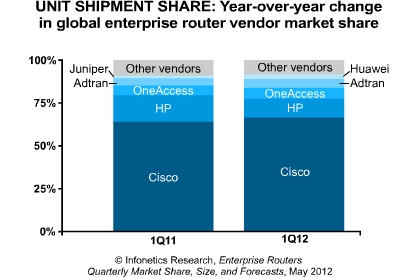 He continues, "Despite the seasonally down first quarter, the enterprise router market continues to grow, albeit slowly. There is demand for routers, but the quest for lower-priced equipment, competition, economic concerns, and a weak public sector make stronger revenue growth elusive."?

Here’s what else Infonetics has to say:

>> From the year-ago first quarter, global enterprise router revenue is up a modest 2 percent, and unit shipments are up 4 percent.

>> Low-end/SOHO router revenue, though down sequentially in 1Q12, posted the largest year-over-year increase, up 44 percent.

>> High-end routers, also down sequentially, are holding up well on a year-over-year basis, as buyers make necessary core network upgrades.

>> Mid-range routers had the poorest performance of the quarter, as buyers substituted lower-cost equipment. Purchases from the public sector (a major buyer of mid-range routers) continued to decline.

>> In terms of unit share, the Top Five enterprise router vendors in 1Q12 are Cisco, HP, OneAccess, ADTRAN and Huawei, with Huawei making the biggest gains: unit shipments are up 130 percent, and revenue is up 79 percent since the year-ago first quarter.