January 2006 Issue The EMTA is the heart of cable’s fixed/mobile convergence play. By Patrick Hibbs, Texas Instruments “Everything that rises must converge,” the novelist Flannery O’Connor once wrote. That observation applies to two of telecom’s rising stars: cable and cellular. In the United States, there were about 24 million wireless users a decade ago. Today, there are about 195 million, according to the Cellular Telecommunications & Internet Association, for a penetration of more than 60 percent. Cable is almost identical, with U.S market penetration of about 67 percent, according to the National Cable & Telecommunications Association. One big growth driver is high-speed Internet. At the end of first quarter 2004, 17.3 million households had cable modems, up from 1.9 million four years earlier. The other growth spurt comes from Internet protocol (IP) telephony: At the end of 2004, there were 3 million cable telephony customers in the United States, up from 850,000 at the end of 2000. Cable and cellular are converging because as their respective markets saturate, new services are the best way to attract and retain customers and to wring more revenue from each. One example is Time Warner Cable, which began reselling Sprint’s cellular service in March 2005. The result is a “quadruple play”: TWC subscribers can get broadband, video, wired telephony and cellular, all on a single bill and with a single contact for customer care. Another plus: Sprint’s cellular customers don’t get charged when they call TWC customers at their digital phone home numbers. FMC for business and residential The success of a cable operator’s fixed/mobile convergence (FMC) play hinges on the design of its embedded multimedia terminal adapter (EMTA). To ensure high-quality voice, the EMTA must have integrated support for cellular codecs in order to eliminate transcoding, a process that reduces call quality. If the cable operator wants to support wireless local area network (WLAN) devices and services—including voice over Wi-Fi— an EMTA with tight 802.11 integration helps ensure high-quality voice. Built-in WLAN and CableHome support also lets the operator determine when to transfer calls to the home Wi-Fi network. That ability is a market differentiator, particularly among price-sensitive demographics. By routing calls over the home WLAN rather than cellular, a cellular/Wi-Fi handset gives customers an innovative way to keep charges under control. On the enterprise side, support for WLANs and cellular should help cable attract more business users, particularly small and medium enterprises. According to an October 2005 report by Kagan Research, cable operators will reach 60 percent of U.S. businesses by 2009, up from 44 percent in 2004. Savings could be the hook: Cellular service is 25-30 percent of most companies’ IT spending, so cellular-WLAN handsets can reduce costs by providing another connection option for voice and data while ensuring that employees are always reachable. Finally, native support for cellular and WLAN makes a cable operator an attractive partner for wireless operators, which view a mix of fixed and mobile services as the best way to serve diverse customer needs, wring maximum revenue from each subscriber and tackle situations that a single technology can’t cost-effectively address. A prime example is indoor coverage. In residences, a handset that can switch between cellular and Wi-Fi is one way to ensure seamless service without additional base stations. An operator that supports that level of interoperability is well-positioned to support the quadruple play. From a handset standpoint, the stage is already set. In January 2004, major carriers and vendors founded the Unlicensed Mobile Access consortium to develop specifications that enable seamless integration between Wi-Fi and global system for mobile communications (GSM)-based technologies. In April 2005, the Third Generation Partnership Project incorporated the UMA specs as part of 3GPP Release 6. The EMTA To support triple and quadruple play, an EMTA must support a wide variety of voice services and network connections. There are at least two reasons why the EMTA should have WLAN tightly integrated. First, when paired with CableHome, it gives the cable operator network-management capabilities such as the ability to see when the user has moved within range of the WLAN. That’s important for ensuring that calls are seamlessly transferred between networks. The more calls that drop, the more likely the user is to call customer care, driving up support costs. Plus, the more reliable a cellular-WLAN handset is, the more likely users are to treat it as their only phone. Second, tight WLAN integration ensures high-quality voice with the help of new standards such as 802.11e. Approved in September 2005, 802.11e improves quality of service (QoS) through techniques such as enhanced distributed channel access (EDCA), where Ethernet-style markers are used to prioritize packets according to their sensitivity to delay. Having this type of sophisticated QoS support built into the EMTA creates an end-to-end solution, where voice traffic is given priority from the customer’s home or business and throughout the operator’s core network. An end-to-end approach is important because each leg of the packet’s journey is subject to latency. As Table 1 shows, those delays quickly add up. 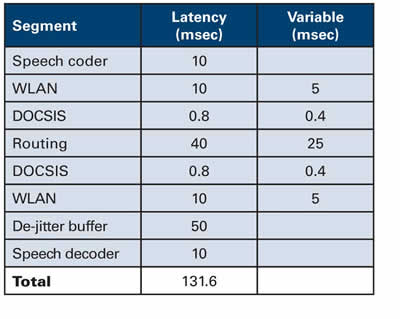 Cellular can add a layer of complexity and delay, but doesn’t have to. When the EMTA has built-in support for cellular codecs, it improves voice quality by eliminating two transcoding processes, such as GSM to/from G.729. Transcoding’s impact on voice quality can be measured by perceptual evaluation of speech quality (PESQ), where a 0.1 difference is noticeable to callers. For example, Table 2 shows that baseline GSM-adaptive multi-rate speech (AMR) has a PESQ score of 3.997. In a call between a GSM phone and an EMTA that doesn’t have native cellular codec support, the GSM-AMR to G.729AB transcoding process produces a score of 3.444. That’s a difference of 0.553, which most callers will notice. 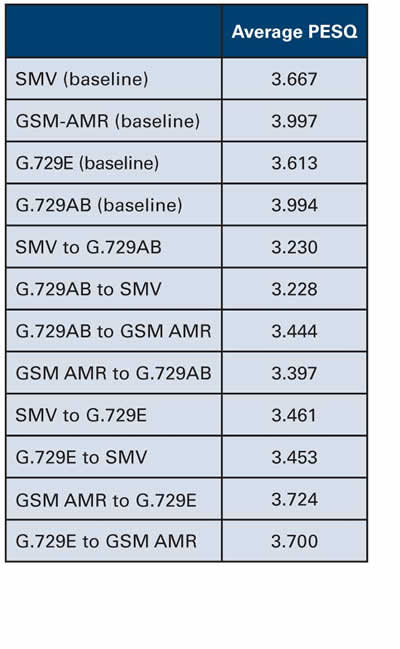 By supporting more than just cable codecs, an EMTA is able to deliver the toll-quality voice that users expect, even when they’re talking with someone on a cell phone. In the example of the GSM call, the EMTA can negotiate directly with the cell phone in order to pick the appropriate codec and thus automatically switch from G.729 to GSM-AMR when the call comes in. In fact, unlike the public switched telephone network (PSTN), voice over IP (VoIP) isn’t limited to an 8 kHz sampling rate, so it can use wideband codecs to provide callers with voice quality that is superior to the PSTN. That gives the cable operator another market differentiator to win over incumbent telco customers who think that switching to VoIP means giving up clear calls in order to get cheap rates. By supporting cellular, cable operators can attract and retain certain demographics. One example is persons under age 25: According to Yankelovich, a research firm, they typically get cable broadband because digital subscriber line (DSL) requires a telephone landline—something they don’t need because wireless is a better choice for their mobile lifestyles. EMTAs with native support for cellular codecs can cater to this market by maintaining high-quality voice for calls between a cable telephony user and a wireless user, such as a family member. Inside the EMTA Component choice directly affects an EMTA’s native support for cellular codecs. By embedding the voice support in a programmable digital signal processor (DSP), new codecs can be added as they become available. That upgradability also maximizes the EMTA investment by extending its life. DSPs have another advantage: Unlike general-purpose processors, DSPs can execute a voice codec’s code in fewer cycles, thanks to single-cycle multiplication and accumulate (MAC) functions. Although MAC can be added to general-purpose processors, it can’t execute each instruction without multiple memory accesses. By comparison, DSP-based cable system on chips (SoCs) support two MACs per cycle, so they’re a good fit for processing-intensive applications such as voice coding. Finally, unlike general-purpose processors, DSPs don’t have to be clocked at a high rate to provide optimum performance. That design makes them power-thrifty, so the EMTA will function longer if it has to shift to battery backup. The ability to make calls after the power has gone out addresses incumbent telco customers who believe that switching to cable telephony is risky. That’s one more way that cable operators can turn a quadruple play into a home run. Patrick Hibbs is worldwide cable product marketing manager for Texas Instruments. Reach him at phibbs@ti.com.

Bobby Flay signed a new three-year exclusive deal with Food Network for the development of new content for both the linear network and on other properties in the Discovery portfolio. Additional episodes of