Shooting hoops with bowling balls from the floor of a 25-foot-deep water tank may not evoke images of alien worlds and supernovas, but it’s closer than you think. After all, astronauts spend lots of time underwater as they simulate weightlessness and practice space walks. And when Nat Geo Channel flew a few journalists to the U.S. Space & Rocket Center in Huntsville, AL, last week (this one included), our full day at Space Camp included about 45 minutes underwater because, you know… that’s just how we roll.

We also learned how to navigate jet packs, withstand 3Gs of force and even bounce around in the micro-gravity of the moon using a spring-loaded harness that hugged our nether-regions a bit too tightly for comfort. We also built rockets (little cardboard ones with bottle-rocket motors), but hey—they flew beautifully, with most making a soft landing with the help of little plastic parachutes. 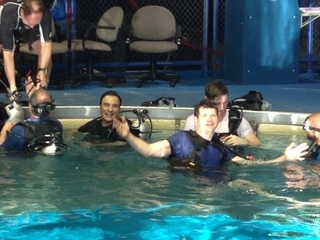 We performed a shuttle mission in which all 16 of us took on various roles both “in space” and on the ground at mission control. As Flight Director, I basically nagged people to run system checks and perform tasks without having to really do any of them myself (a dream job), and somehow the shuttle landed safely on the ground. Was the whole thing rigged? Probably. None of us really had a clue what we were doing, and if you want to be technical about it, two astronauts were still on a spacewalk outside the shuttle as it was touching down in Houston. The Sandra Bullock-Gravity jokes notwithstanding, we chalked it all up to an acceptable loss of human life and went out drinking at the Marriott across the street. 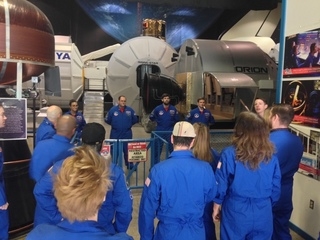 So why did Nat Geo subject us to these trials? Because the net is a lynchpin of the massive marketing campaign around a mega -reboot of the late Carl Sagan’s “Cosmos,” which ran as 13 episodes on PBS in 1980 and eventually became a global phenomenon. The new version stars astrophysicist Neil deGrasse Tyson, who actually spent a day with Sagan when he was a teenager and credits his career in science and TV punditry to Sagan’s ability to encourage and inspire.

In an unprecedented move, Fox Networks on March 9 will premiere Cosmos across 10 U.S. nets simultaneously, including Fox, FX, FXX, FXM, Fox Sports 1, Fox Sports 2, Nat Geo, Nat Geo Wild, Nat Geo Mundo and Fox Life, with Fox International Channels and Nat Geo Channels International premiering the reboot on all 90 Nat Geo channels in 180 countries, as well as 120 Fox-branded channels in 125 countries. It’s the biggest TV series launch in history by any measure, fitting considering that it tackles existential and infinite questions of time, space and astrophysics.
Of course, none of this would have been possible without the relentless drive of Sagan’s widow Ann Druyan, who worked tirelessly for years pitching the Cosmos reimagining to countless networks. She called in to chat with us in Huntsville the night before our Space Camp adventure and revealed that she fielded much interest but held out for full editorial control. “We went to the usual suspect networks to try to mount a new Cosmos,” she recalled. “Everybody wanted it, but nobody wanted to give me the creative freedom that I felt was necessary to protect the legacy of Cosmos and Carl Sagan.” 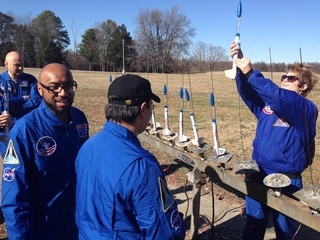 After a frustrating several months of negotiations with various nets, “Family Guy” creator and Hollywood heavyweight Seth MacFarlane entered the picture. He had contacted deGrasse Tyson following an unrelated science talk deGrasse Tyson had given in Hollywood months earlier. MacFarlane wanted to know what he could do to help bring science back to TV—and deGrasse Tyson immediately mentioned his involvement with Cosmos. That was all it took. MacFarlane, who loved the series when he was a kid, became a producer and used his considerable muscle at Fox Networks to help get Cosmos greenlit—and with all of the editorial control that Druyan sought. Another contribution: MacFarlane convinced Druyan to add animated sequences to dramatize historical discoveries, and based on the premiere screening we watched in Huntsville, this unique approach works beautifully.

Of course, cynics out there might look at the Cosmos reboot as more of the same. After all, Discovery’s Science Channel has already raised the bar on production values and star power with hits like “Through the Wormhole with Morgan Freeman.” And there’s certainly no lack of CGI-drenched science shows that explore the universe. But this is different. This is a global launch across hundreds of networks that could inspire an entire generation to take up science as a career—or at least give it the respect that Druyan argues has waned recently. “The dreams of a generation or two before have kind of been downsized,” she said, noting “a period of alienation to science” in recent years. “It’s a lot more about shopping lately than it is about going to the stars,” she told us. “It’s an excellent time for Cosmos. It’s time to get going again. I feel there’s an appetite.” Let’s hope she’s right.
As for Space Camp, a few journalists might have been inspired as well. Or at least better able to appreciate the men and women who risk their lives to explore space. Speaking of those men and women, Nat Geo Channels International will beam live images from the International Space Station in a two-hour special event dubbed “Live From Space” immediately following Cosmos’ premiere episode. It will air across 170 global nets, and it sounds like producers have many surprises planned (it’s live, so anything could happen anyway). We’re told mission control can shut down the feed if there’s a Gravity-like disaster—but let’s just assume that won’t happen. The bottom line: No one can say that Fox Networks hasn’t done its part to inspire us all to do less shopping and more dreaming. And that’s quite a feat. 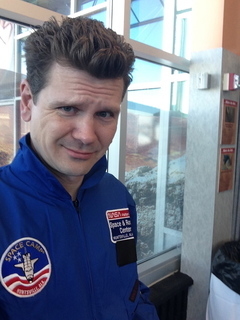 Verizon Not Concerned About C-band Delay

Verizon CEO Hans Vestberg isn’t sweating a delay in the deployment of C-band spectrum due to concerns from the aviation industry.