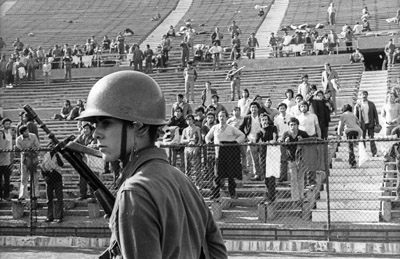 Archival footage from "The Opposition," a 30 for 30 "Soccer Story" about the
1973 World Cup qualifier between Chile and the Soviet Union during Pinochet’s rule.

With the World Cup set to kick off in June, ESPN has created a barrage of programming surrounding the massive global event—from short films, to commentator announcements, to this hilarious play-by-play of an awkward first date. Earlier this week it launched its newest offshoot of its 30 for 30 documentary series, dubbed “Soccer Stories,” a collection of films touching on international topics surrounding the sport. (More from an earlier article here.) We spoke to Jeffrey Plunkett, the director of “The Opposition” (airs Tues, April 22, 7pm), which looks at the role politics played in a 1973 World Cup qualifier match between the Soviet Union and Chile during Augusto Pinochet’s dictatorship. Here is Plunkett on the project’s genesis, soccer coverage in the U.S. and the challenges of depicting a topic that remains contentious in Chile to this day.

You played soccer at Princeton. When did you know you wanted to cover the sport in addition to playing it?
Good question. I think I’ve always tried to find excuses to do soccer stories. I don’t do just sports stuff. In fact I’ve been in the current affairs space. But especially when the World Cup rolls around, I’m always looking for a soccer story because it seems like there’s a bit more of an appetite during those World Cup years. People outside of the soccer world take more of an interest in the sport. I’d love to do even more than those, but that’s how it’s been the last few cycles.
How did this project come about with ESPN?
The background with this goes back to Princeton. I initially started a documentary about [former U.S. Men’s National Team coach] Bob Bradley, who, as you may know, is a former Princeton coach and then took the Egypt job during a pretty hectic time over [there]. So I went over and shot with Bob and the Egyptian team during the World Cup qualifier in the summer of 2011, and put together a little reel to try and turn that into a feature. I just couldn’t find the right outlet for it and the right funding, but in the course of talking to people, including ESPN, I sort of got wind that they were doing these soccer stories in advance of the World Cup. So that’s when I went in search of another story that they may be interested in, and then find the Chilean one.
What brought you to the particular topic in The Opposition?
There’s a book by a British and academic by the name of David Goldblatt, called The Ball is Round. It’s specifically looking at interesting moments and critical moments in soccer’s history. And he spends a couple pages on this episode—not a ton, but just sort of mentions the National Stadium and that it was turned into a prison, and the absurdity of the last qualifier when the Soviets boycott. That’s where I first heard of the story.

When did you realize it could be a doc?