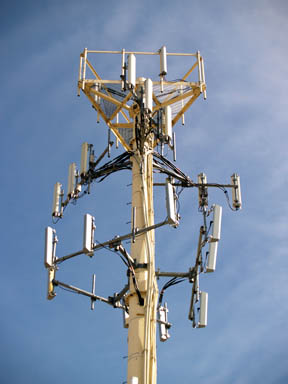 All across the United States, consumers and businesses are making new mobile devices central to how they work and play. Smartphones, tablet and netbook PCs, and diverse other gadgets are driving tremendous increases in traffic volume on wireless networks, compelling mobile network operators both to increase network speeds and expand the number of cell sites. And this is just the beginning – some industry forecasters believe there could be 50 billion connected devices worldwide by 2020.
There were more than 250,000 cell sites operating in the United States in 2009, and some industry estimates say that number will cross 300,000 in fewer than four years. Bandwidth demand from a typical cell site is growing rapidly – an urban site that used 20 Mbps of connectivity in 2009 is going to consume more than 50 Mbps in 2012. Every cell site needs to be connected over a metro area network into the central office locations where the wireless switches reside (otherwise known as mobile backhaul), presenting the MSO community with a terrific business opportunity that’s well-matched to its existing assets and capabilities.

Five years ago, mobile backhaul in this country usually was handled by a few copper T1 lines at each cell site. These T1 lines were switched across a LEC network to central office sites, carrying both circuitized voice and packetized data traffic on TDM connections.

Mobile usage growth – especially the dramatic increase in data consumption driven by smartphones and such bandwidth-hungry applications as video – is transforming mobile backhaul. The preferred solution for new mobile backhaul networks is Metro Ethernet, offering scalable capacity and greater flexibility for transport of both packet and circuit services. Some research houses forecast that the number of cells sites served by Ethernet will grow from about 10,000 in 2009 (4 percent of all sites) to 147,000 in 2013 (more than 50 percent of all sites).

Historically, the backhaul business has been dominated by LECs, but this is changing. As wireless markets have consolidated, major wireless operators increasingly see LECs as competitors and not business partners. With cell sites requiring new, high-capacity Ethernet backhaul, MSOs are well-positioned to step in with their own solutions.

MSOs have significant experience operating large metro-area networks, and most of these networks already make significant use of Ethernet technology to deliver residential triple-play, business Internet and other data services. It’s a natural move for MSOs to provide mobile backhaul, and many are already doing so (Cox Communications, for example, earned more than 10 percent of its commercial revenues from backhaul in 2009). MSO backhaul solutions that deliver on mobile operator requirements will win business from the LECs while delivering profits to the MSOs.

MSOs have valuable assets in their metro networks and operating experience that make them strong contenders for mobile backhaul opportunities. In pursuing these opportunities, MSOs must look for four key things:

Convergence benefits in a metro solution that can serve mobile backhaul, business Ethernet services and residential customers in a secure, integrated fabric

Regional studies conducted by some vendors have estimated that MSO networks pass nearly 90 percent of existing cell sites, and at least 25 percent with fiber (increasing as MSOs expand their fiber footprints). For most sites, MSOs will extend Ethernet to cell sites directly via point-to-point or fiber rings. But for the rest of the cases, there may be economic or practical obstacles to using a dedicated Ethernet fiber links, and the backhaul operator will need to explore other solutions, including:

Passive Optical Networks: These technologies (including EPON and passive WDM) can be an economical and operationally simple way of serving multiple sites from a hub location, as new services can be added using different light wavelengths.

Microwave: Microwave backhaul is popular outside the United States, accounting for nearly two-thirds of connections, but it has seen less deployment here. Point-to-point microwave radios are ideal for providing backhaul connections into cell sites where challenging terrain, trenching costs or other obstacles make the cost of fiber prohibitive. The Yankee Group estimates that trenching fiber costs more than $150,000 per mile in metro areas, while the cost of setting up a microwave link can be lower, provided the required spectrum and an unobstructed line of sight is available. The latest in microwave technologies can carry 500+ Mbps of Ethernet traffic.

HFC/Copper: In some cases, the MSO’s existing copper network may pass cell sites, and it can be used to provide backhaul services. However, it can be a challenge to meet the capacity demands of busy cell sites via coax, especially when the coax is shared with residential customers.

These last-mile connectivity solutions will bring Ethernet capacity into cell sites along with circuit emulation (pseudowires) for 2G services, network timing/synchronization features and virtualization for serving multiple operators over a common connection.

Backhaul services are sold to mobile network operators, but a typical cell site is operated autonomously by a tower provider and hosts two or three mobile networks. Backhaul providers with secure and capable virtualization features (including virtualization of network timing) over the “last mile” connections will achieve economies of scale when providing backhaul services to every operator using a given cell site.

Backhaul capacity must be both scalable (from 10 Mbps or less to more than 100 Mbps today, with RFPs demanding 300+ Mbps in the future) and consistent, with bandwidth guarantees even during network busy hours. And while consumer demands for mobile data are increasing dramatically, consumer spending on mobile services is not – a successful backhaul provider must keep tight controls on operating expenses to help ensure long-term profitable delivery of the service.

From Circuits To Packets

While Ethernet is the preferred technology for providing cost-effective capacity, backhaul providers also will need to provide legacy interfaces to older equipment and strong support for emulated circuits across the metro aggregation network.

Some mobile operators initially may prefer hybrid backhaul solutions that preserve a circuit-based connection for 2G services in the “last mile.” This could mean using existing LEC-delivered TDM backhaul for voice, while data services are diverted to the MSO’s Ethernet network. Increasingly, though, mobile operators are gaining confidence in the packet network’s ability to transport voice and will begin to carry these T1s over the Ethernet infrastructure. This allows them to achieve the cost advantages of a “pure packet” backhaul by shedding their leased line/T1 circuit payments.

Backhaul networks should employ a connection-oriented technology like MPLS along with Ethernet. MPLS has the benefit of providing a transport layer for TDM circuit services in addition to Ethernet packets through the use of pseudowires. It also adds extra levels of resiliency and traffic engineering, not provided with Ethernet alone.

The new MPLS-TP standard is an excellent fit for the needs of mobile backhaul. MPLS-TP is a simplified version of MPLS that is more suitable for transport environments, and it can be used standalone or in conjunction with the more sophisticated IP/MPLS approach already widely deployed in wireline networks.

MSOs will use one metro aggregation network to carry traffic from cell sites, business services, residential triple-play services and more. This is one of the key ways in which MSOs will be able to differentiate and maintain a lower cost of operation, as they are not burdened by the legacy mobile infrastructure of telcos. Figure 1 illustrates a typical converged MSO network.

By leveraging a flexible, QoS-enabled packet network based on Ethernet and IP/MPLS and/or MPLS-TP, MSOs can deliver multiple services simultaneously across a common infrastructure without compromising on the SLA for any service. MSOs will find that products built purely for 2G/3G backhaul aggregation fall short when applied to converged environments – it will be necessary to work with equipment vendors that have experience in the full range of services.

Mobile data traffic is growing much faster than mobile data revenues, and backhaul providers should expect the price-per-bit to fall as capacities increase. By leveraging virtualization features, backhaul providers will be able to grow to serve multiple operators within a cell site, significantly enhancing the ROI for the connectivity investment. It’s also important that backhaul networks deliver comprehensive, end-to-end OA&M support, so that operating costs can be held to a minimum.

Such new standards as IEEE 802.1ag and ITU Y.1731 define rigorous requirements for OA&M in metro Ethernet and backhaul networks to facilitate both troubleshooting and SLA verification. MSOs must require their vendors to deliver robust implementations of these standards, supported strongly in hardware so that performance monitoring and fault detection can be performed with both speed and scale. Together with well-established features ( e.g., NIU remote loopback), these new standards help MSOs drive operating costs down even as capacities increase.

Rafael Francis is head of marketing and technology/Americas for ECI Telecom. Contact him at Rafael.Francis@ecitele.com.

Lumen Technologies is selling its incumbent local exchange carrier business in 20 states to funds managed by Apollo Global Management for $7.5 billion. The assets to be sold include the consumer, small