Among several trends impacting the access architecture over the past few years has been an increase in the number of quadrature amplitude modulation (QAM) channels used for narrowcast services.

Most MSOs are deploying more and more unicast QAM channels to support growth from the success of video on demand (VOD), especially as a result of more high definition content. Deployment of switched digital video (SDV) for an increasing number of multicast content offerings is driving QAM channels even further. And with the availability of channel bonding in DOCSIS 3.0, MSOs are deploying additional QAM channels for their cable modem termination system (CMTS) equipment.

These two trends result in a continuous increase in the number of QAM channels per service group. (See Figure 1.) Moreover, the expectation from the current service projections is that such growth will continue and even expand, especially as MSOs reduce the number of analog channels available in the network. 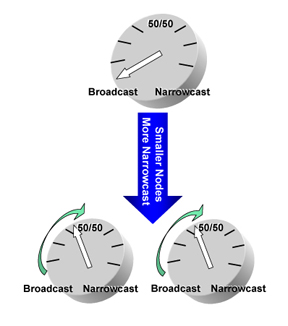 As a result, the cable industry needs ever-denser edge QAMs to reduce both the cost from the equipment itself and the resulting environmental requirements in headends and hubs.

The cable industry’s suppliers identified the above trends some time ago. Because of it, edge QAM vendors have been developing denser QAM channel per RF port implementations, even approaching densities that will eventually allow the use of unique QAM channels for every service group.

Nevertheless, this technology evolution has been difficult to harness. It is not a simple operational and financial matter for MSOs to take the leap towards such higher densities for any given service, and consequently it is difficult for vendors to justify the required investment in the implementation of this technology. This is not only true for edge QAM vendors; it is particularly difficult for CMTS suppliers implementing integrated architectures.

With modular CMTS and the modular headend architecture it should be possible to achieve such densities as Edge QAM development evolves towards higher densities and CMTS equipment is developed for these network architectures. However, most CMTS development has focused on an integrated architecture for a variety of technical reasons.

A new equipment architecture option is emerging that enables the implementation of denser network architectures in yet another way, providing both MSOs and vendors an alternative approach of achieving the goals of the modular headend architecture. Such equipment architecture is described in work underway at Comcast, which is developing product specifications for a new class of equipment called converged multiservice access platform, or CMAP.

Given the trends and technology evolution outlined above, Comcast is working on the development of a next-generation access architecture (NGAA) which leverages existing communications technologies, such as DOCSIS 3.0 and current HFC architectures, and incorporates newer ones such as dense edge QAM architectures, Ethernet optics, high-spectrum transmission, orthogonal frequency division multiplexing (OFDM) and others.

The key goals of NGAA include:

Figure 2 depicts some key components of NGAA, which are briefly described below: 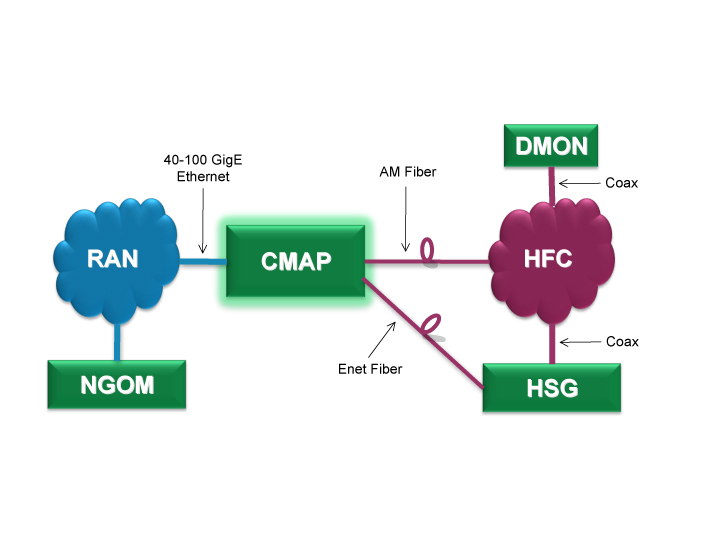 Converged multiservice access platform (CMAP): This is the key component of NGAA, which implements the functions of the CMTS and the edge QAM for all narrowcast and broadcast digital services.

Downstream monitor (DMON): This is a probe, intended for deployment in the HFC network as an outside plant component. The DMON probe leverages components available in the cable industry, chiefly the DOCSIS modem technology, to implement extensive network monitoring, maintenance and operations functions while streamlining and enhancing operations. DMON probes from various hardware vendors will be available that will integrate with software systems from other vendors, enabling an interoperable ecosystem.

Next-generation operations manager (NGOM): Together with the DMON probe, plus features that will be available in the CMAP platform, and leveraging existing and new field handheld equipment, the NGOM system will streamline the execution of current processes such as spectrum surveillance, plant alignment/balancing and sweep and system proofs. Additionally, NGOM will enable the implementation of newer functions, including extensive network management, content integrity monitoring, and even functions such as program and/or advertisement monitoring.

High spectrum gateway (HSG): The objective of the HSG is to enable an overlay high-bandwidth upstream and downstream transmission in conjunction with the CMAP. This can be achieved by leveraging technologies such as Ethernet over glass, high-spectrum RF transmission (e.g., above 1 GHz), and higher order modulation techniques such as OFDM and 4048-QAM modulation, resulting in capacity and spectral efficiencies approaching 10 bits/Hz.

The sections below describe the CMAP in some detail, outlining its features, implementation options, relation to industry standards, and possible deployment strategies. Given space constraints, the other key components of NGAA (DMON, NGOM and HSG) will not be discussed in this article.

The converged multiservice access platform (CMAP) is intended to provide a new equipment architecture approach for manufacturers to achieve the edge QAM and CMTS densities that MSOs require in order to address the costs and environmental constraints resulting from the success of narrowcast services.

In addition to the architecture described in the Modular Headend Architecture technical report from CableLabs (i.e., Modular CMTS with Universal Edge QAM), the CMAP provides an alternative approach to the implementation of headend equipment that provides QAM channels for different services.

To achieve the functionality described above, a CMAP device implements the various edge QAM and CMTS functions in a consolidated platform. 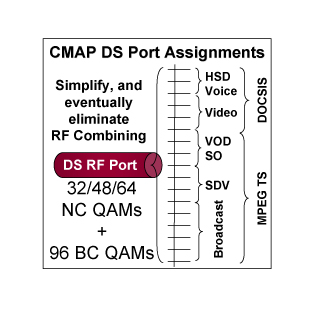 Figure 4 outlines the possible modular implementation of CMAP whereby multiple types of access shelves are available for different access network architectures. However, other modular implementations are possible, for example incorporating multiple access technologies into a single AS, whereby one centralized PS would interface with multiple AS devices possibly distributed across various sites. 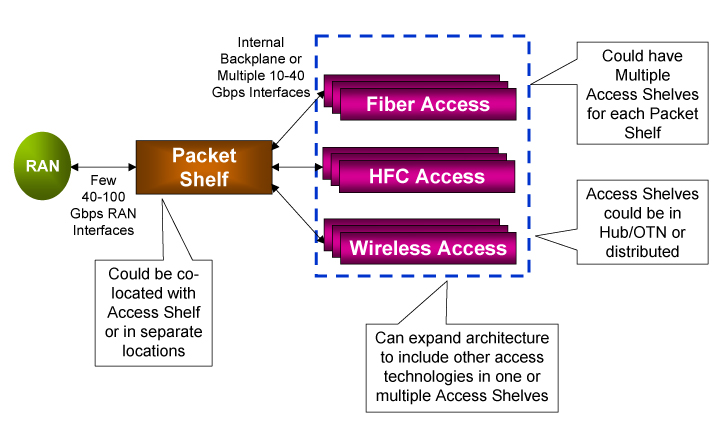 The key functional goals for CMAP include:

The CMAP requirements included in the specifications currently under development at Comcast outline product requirements, including capacity, performance, network implementation functions, and other such targets and objectives. In doing so, the CMAP specifications reference industry standards documents without duplicating the requirements detailed therein. Those could include CableLabs specifications on DOCSIS, downstream RF interface (DRFI), virtual switch instance (VSI), performance monitor interface (PMI), PacketCable and other technical categories.

To develop the CMAP product specifications, Comcast is working with a broad group of industry leaders and technology experts who have volunteered to help Comcast develop these requirements. Experts from CableLabs, Cable Europe Labs and a number of silicon suppliers are advising Comcast in this effort.

The NGAA team plans to complete three CMAP-related product requirement (see Table 1, page 24) specifications in the next few months. The first of these, called the CMAP hardware and functions specification, has been under development for several months, and is currently in draft form undergoing final review.

In addition to the CMAP product requirements specifications, the team has focused on additions and/or changes to existing or new cable industry specifications. The main body of work in that regard has been related to the CableLabs DRFI specification, which has undergone several engineering change requests (ECRs) to accommodate the design and operation of implementations of large numbers of QAM channels per RF port, which are applicable to the CMAP as well as other dense QAM channel-per-RF-port equipment implementations.

Another area of industry specification work relates to SCTE-02 via the SCTE IPS Working Group, regarding enhancements to the F connector requirements and the addition of a 75-Ohm version of the MCX connector. The 75-Ohm MCX connector is commonly implemented in a gang holder known as a universal cable holder (UCH), which consists of a row of 10 connectors typically used with mini coaxial cable.

Other industry specifications may be updated as deemed appropriate.

Unlike other similar efforts to date, such as requests for information or quotes (RFIs or RFQs) and/or prior requirements documents for CMTS and edge QAM equipment, the CMAP specifications outline very specific chassis requirements, including comprehensive line card implementation details, such as the number of supported QAM channels for each function and the redundancy characteristics. The CMAP specifications also spell out physical interface objectives, such as type of connectors and number of ports; detail power supply locations and orientations; and specify airflow direction, entry/exit and other implementation requirements.

These requirements should not be a limitation to vendor innovation. While recognizing the need to simplify operations by creating standards for key operationally beneficial parameters, they leave vendors with many opportunities for differentiation.

Figure 6 shows a possible front and rear view of the CMAP chassis that would be compliant with the CMAP specifications. The figure depicts the following details: rear-facing connectivity for all components, downstream line cards (DLCs), upstream line cards (ULCs) with twice as many upstream ports as downstream ports for 2:1 upstream-to-downstream ratio, redundant switch-route engines with primary and secondary 100 GigE ports, redundant power supplies and vents for air flow. 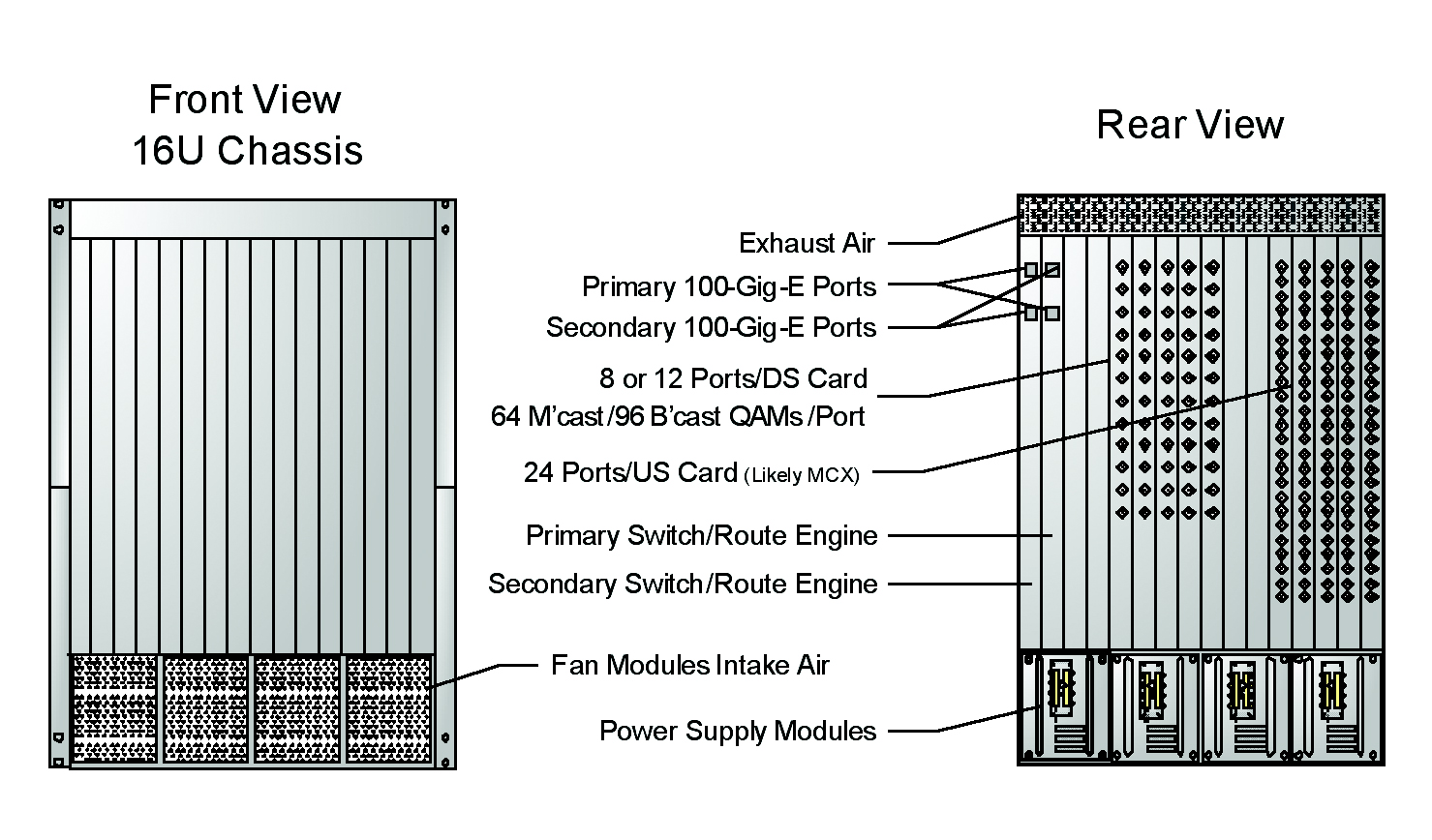 Given the scope of each RF port, it is important that operation be highly reliable. Therefore, the chassis is required to implement N+1 redundancy for upstream and downstream line cards and 1+1 redundancy of all common equipment. This line card redundancy is achieved by way of a mid-plane near-passive RF switch and the use of physical interface cards (PICs), which provide the separation between the active components with critical mean time between failure (MTBF) and the RF interfaces to the minimum remaining external combining and downstream/upstream lasers.

Below are examples of the possible deployment of a typical CMAP configuration in two types of systems, one implementing an HFC network with 750 MHz of spectrum capacity and another with 860 MHz of capacity. Both use cases are for typical systems, including a normal number of homes passed per node and per hub.

In the first example, detailed in Figure 7, there is a group of analog channels (approximately 30) in the lower portion of the spectrum with a small number of gaps (two as depicted) consisting of a few 6 MHz channel slots. Digital programs from the group of broadcast QAMs occupy these gaps between analog channels. Additionally, there is a group of narrowcast QAM channels located towards the center of the spectrum. 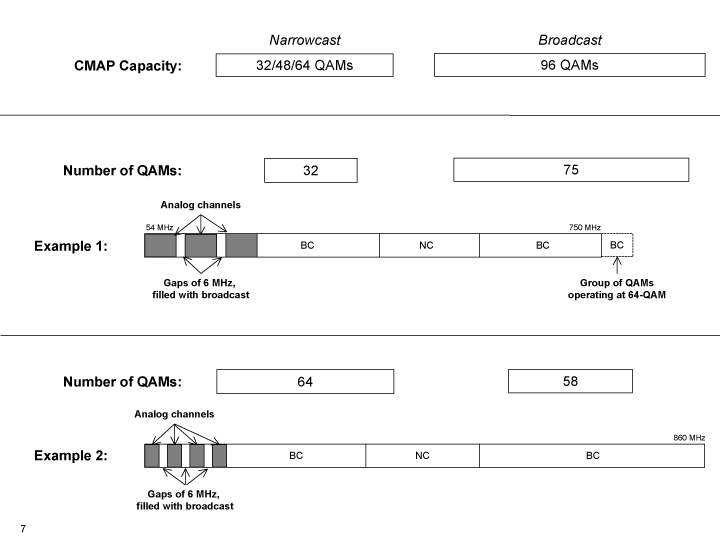 One important consideration is the evolution and availability of silicon components.

The functionality described by the CMAP specifications does not require any new silicon. This is the case for both the upstream and downstream. CMTS vendors are already using and/or planning on making available line cards with existing and available high-density burst demodulator silicon and corresponding MAC chips for upstream. For the downstream, vendors can utilize existing technology for direct digital synthesis (DDS) consisting of readily available FPGAs and digital-to-analog-converters (DACs) from multiple vendors.

However, multiple silicon suppliers are in the process of implementing chips that provide very large QAM channel counts for downstream implementations. Some of these implementations are able to support the entire channel line-up from a single chip, end even more!

Even though these new silicon implementations are not required to develop a CMAP, they will certainly simplify designs, help reduce printed circuit board space and power/heat dissipation requirements, help reduce costs further and accelerate development once the new silicon is available.

As with other technology evolutions, these changes in the industry’s access architecture may take longer than desired. On the flip side, their acceptance has farther reach than expected.

From the many discussions we have had with other MSOs, both within North America and throughout Europe and South America, interest for the deployment of this platform is very high. Without exception, all MSOs we have spoken to in the past months are as interested as we are on the operational simplifications that the CMAP offers and the new functions it enables.

From our preliminary discussions with vendors, and without revealing confidential information and plans they have shared with us, we anticipate initial availability of equipment for early deployment in the 2011 timeframe, and broad availability from multiple vendors in 2012 and 2013.

However, vendors will likely have many discussions with potential customers in the months to come and will adjust their plans accordingly.

The foregoing examples and use cases are for illustrative purposes and are not a representation of systems and methods implemented by Comcast.

The FCC made it official Monday, releasing an order on remand finding that SNR Wireless LicenseCo and Northstar Wireless are controlled de facto by DISH and thus ineligible for the $3.3bln in AWS-3 bidding