BCM’s Clickable TV is an EBIF application that enables viewers watching a broadcast station via their cable service to connect directly with the programming, brands and advertisers that interest them. When a viewer is watching TV, an icon will appear onscreen indicating a “Clickable Moment,” an opportunity for the viewer to use the remote’s “Select” button to forward (or “bookmark”) content. Delivered automatically via email or Web portal, and without interrupting the viewing experience, a customized link connects the viewer directly — yet anonymously — to the specific information (or purchase discount or free sample offer) requested.

For broadcasters and cable operators alike, this model offers a new opportunity to generate revenue from TV content and advertising sources; however, cooperation between the broadcast station and the cable operator is essential. The service itself is free for viewers, it operates on the cableco’s current deployed base of set-top boxes (STBs), and it requires no additional product installation. It is the cable operator’s support for delivery of the data required for interactive TV that makes the headend a key enabler of interactive services for broadcast content consumed via the cable system. Furthermore, the cable operator’s ability to collect and supply usage data enables the broadcaster to bill its advertisers much as a Web site might charge for click-throughs.

As a result, the broadcaster can benefit from increased ad rates for more highly targeted delivery of messaging to viewers. The MSO benefits in that it can capture a slice of this pie through participation and support of interactivity with a minimal investment. The design of the Clickable TV request for information (RFI) helps ensure neither player loses out with the viewer being dragged away from broadcasts to watch further enhancements. What’s more, this model has the potential to shift ad dollars from the Internet back to TV.

The key to this interactive-TV model is the addition of the necessary EBIF metadata at the broadcast station. It’s simply not practical for the cable headend to try to insert metadata into a broadcaster’s incoming stream. The variability of each broadcast schedule — vulnerable to breaking news and other last-minute changes — makes it difficult to sync interactive services precisely with ads, news and other content.

The broadcast station has both the real-time schedule information and the tools necessary to get metadata insertion right for its broadcast stream. Insertion capability at the local level also makes sense because metadata added at the broadcast-network level often gets stripped out of the signal and needs to be restored at the affiliate if it’s going to be passed on to the headend effectively. Thus, vendor support for flexible metadata insertion at the local broadcast level plays a significant role in making interactive services available for network programming and national ad campaigns.

The BCM Clickable TV model works when the correct applications and triggers are delivered in the transport stream at the right time and the right place. Triveni Digital recognized the possibilities this functionality could bring to its broadcast customers and made it part of its product-development roadmap. Through consultation with BCM and other vendors, Triveni Digital was able to design and engineer EBIF support into its GuideBuilder PSIP generation system for ATSC DTV broadcasters.

Metadata in the form of the Program Map Table (PMT) includes descriptors associated with packet identifiers (PIDs) inserted into the station’s DTV transport stream, which provides a means by which the many, many digital bits within that stream can be identified as being audio, video and different types of data and, in turn, handled accordingly. The GuideBuilder system already supplies the PMT and PSIP data that Raycom stations, including WSFA 12 News, require for effective DTV broadcasts. 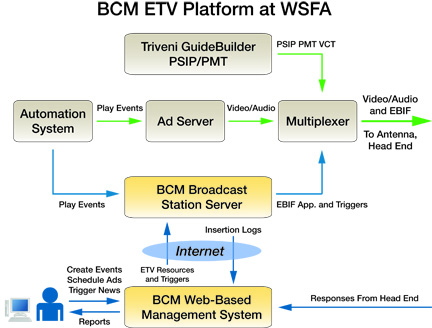 The Triveni Digital metadata generator now updates the PMTs to include the PID descriptors for specific EBIF application streams, including a specially designed MPEG-2 data stream called the “ETV Integrated Signaling Stream (EISS)” for each specific ETV event, and the EBIF PID for carrying the ETV application and resources. The former stream triggers transmission of an application module to a set-top box and identifies when the EBIF user agent in the STB should run that module.

The broadcast stream incorporating added EBIF metadata is transmitted over the air (OTA) and delivered to the cable headend. This means that the GuideBuilder system must ensure the signal remains compliant with standards for both delivery mechanisms and is completely transparent to TVs receiving broadcasts via antennas.

Unlike previous interactive-television solutions, EBIF works on the low-end STBs that make up approximately half of the installed base in the country. and its lower implementation cost puts the business model for interactive television well-within reach for the first time. Cable operators rapidly are embracing EBIF ( see related story on page 16), boasting significantly more than 20 million enabled homes today, with that number growing at the rate of millions per quarter. The widespread use of EBIF in cable systems makes implementation of Clickable TV, which effectively is a RFI application, rather straightforward from the perspective of the headend.

The broadcaster sources the EBIF data, signaling and metadata from the BCM central system, which is then inserted and carried through the cable system without placing an additional burden on the cable operator. EBIF metadata generation and insertion are managed by the GuideBuilder system and the station multiplexer. The BCM solution adds three main components: a server at the broadcast station, a server at the cable headend and a Web-based system that serves as the hub for the whole service. The BCM system oversees the interactive services workflow across both the broadcast station and cable plant.

To make a news story interactive, the staff at WSFA News 12 can log into the Clickable TV Web-based interface, create a Clickable Moment, add a name or slug for that moment and then enter the URL associated with it. A similar workflow is used for making ads interactive with the URL pointing to the advertiser’s Web site or offer. All of this work is done centrally, and the data necessary for metadata insertion is uploaded from the central system into the server at broadcast station.

The Clickable Moment can be automated according to the playout schedule (typically for advertising) or triggered manually during such live broadcasts as news programs. The data rides in the broadcast stream; through the headend multiplexer; and to the STB, which can identify EBIF and draw an icon on-screen to indicate a Clickable Moment. If a viewer chooses to interact and confirms with an “OK,” a data packet is sent from the STB back to BCM’s store-and-forward server at headend to indicate what the viewer clicked on and when. This information is, in turn, delivered to the central system for fulfillment, the delivery of the appropriate link via email or portal.

Viewer privacy is maintained throughout this cycle, as no personally identifiable information ever is gathered by the cable operator, the broadcaster or the BCM system. Even requests are encrypted, making it impossible to associate this information with the MSO’s subscriber base.

Building interactive-TV services on EBIF enables a low-cost, low-risk business model. MSOs don’t need to take on the colossal capex that would be required to put new box in every house, and they can realize real returns even though interactive TV is just beginning to reach the market.

For broadcasters following in the footsteps of WSFA News 12, simple changes to their existing metadata-generation systems and end-to-end solutions, like BCM’s Clickable TV, make this a straightforward and cost-effective solution for launching revenue-generating services quickly and painlessly.

Madeleine Noland is CTO at BCM (formerly BackChannelMedia) and Dr. Richard Chernock is CTO at Triveni Digital. Contact them at mnoland@bcm.tv and rchernock@trivenidigital.com.