MSOs have been moving toward regional consolidation of systems, and leveraging economies of scale by centralizing operations. This metro area network (MAN) structure eliminates redundant hardware such as receivers and other equipment needed to generate broadcast cable feeds. However, it introduces a need for additional transport from the central headend to local sites to distribute these feeds. Increasingly, cable operators are turning to gigabit Ethernet (GigE) solutions to supply this additional transport. So, what is GigE? GigE refers to a group of specifications encompassing the first (physical) and second (data link) layers of the open system interconnection (OSI) network model, with a maximum data rate of 1 gigabit per second (Gbps). In plain English, GigE is a group of specifications for signaling methods over various types of cabling (physical media), as well as the translation of higher-level network messages into data frames that are sent using those methods, at speeds up to 1 Gbps. Why GigE? GigE is denser and less expensive than other competing interface formats and provides pervasive functionality such as switching and routing for use in its applications. The 1,000 Mbps capacity of GigE far exceeds the 214 Mbps limit of the competing Digital Video Broadcast Asynchronous Serial Interface (DVB-ASI), and outstrips both the 155 Mbps OC-3 and 622 Mbps OC-12 capacities often used by asynchronous transfer mode (ATM) equipment. However, GigE equipment generally is less expensive than its competitors using different interface formats. Equipment cost savings are available to suppliers as well as their customers. The IP-based protocols underlying GigE applications also can be encapsulated for use with ATM, synchronous optical network (SONET) and resilient packet ring (RPR) transport equipment. For example, this allows a SONET fiber ring at the maximum capacity of OC-48 (2.5 Gbps) to carry the traffic for multiple GigE links. GigE serves well as a high-density, high-capacity, standardized interface to today’s wide assortment of optical transport gear. GigE today The regional consolidation trend favors a centralized architecture. Centralized deployments generate GigE traffic in the master headend, and transport nonlocal traffic to hubs using optical technology. In this scenario, narrowcast services clearly will generate much more nonlocal traffic than broadcast services, but the inner workings of both are basically identical. The traffic is transmitted to edge devices, which receive the GigE data, remultiplex it and transform it into upconverted RF digital cable signals, suitable for transport and recombination with other RF signals such as analog cable channels. Expansion, service load distribution or transport network topology may make it desirable to supply certain hubs with application servers, to generate and distribute traffic like a headend, in addition to the normal GigE reception equipment. These sites perform a combination of the traditional headend and hub roles, and architectures using this type of design are referred to as hybrid architectures, because they are a mix of the standard centralized and distributed architectures. Asymmetric deployment Figures 1 and 2 show symmetric and asymmetric deployments and expansions. 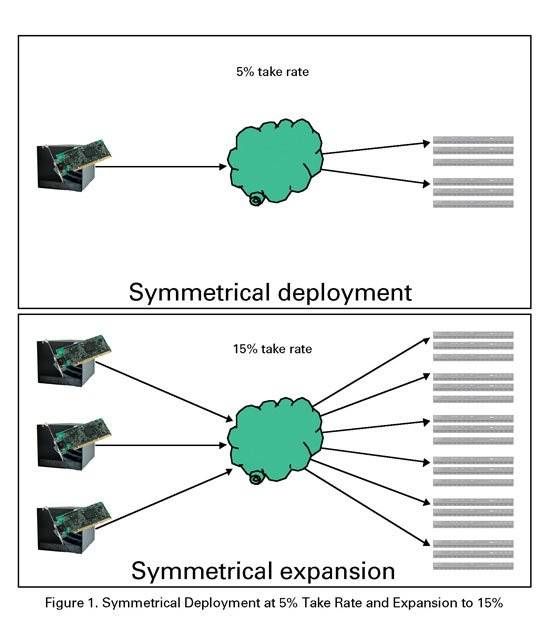 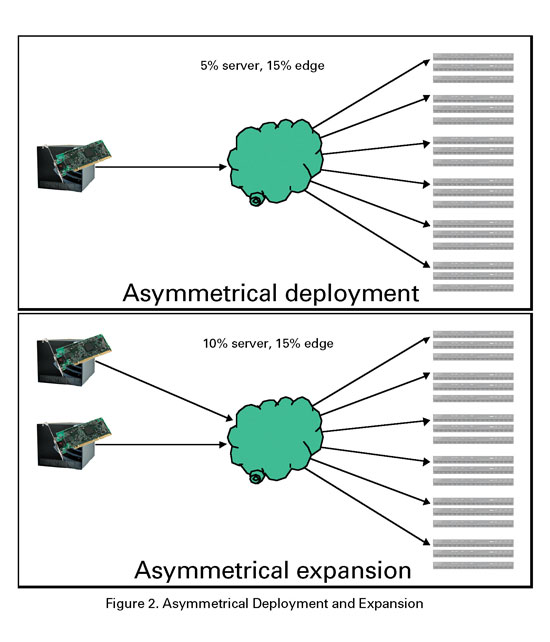