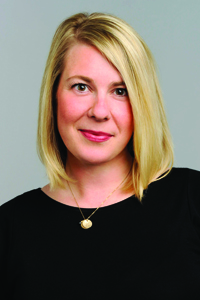 SVP, Digital
Oxygen Media
Kavanagh’s work at Oxygen over the past six years is more proof positive that female audiences and technology make a beautiful pair. She oversees Oxygen’s suite of digital offerings, including fast-growing Oxygen.com and OxygenLive.com, a two-screen experience where fans interact with Oxygen talent in real time during an episode of a given show via Facebook, Twitter, the Web site or iOS and Android apps. Kavanagh spearheaded OxygenLive TV, which brings real-time viewing conversations to the television screen, and negotiated strategic partnerships with digital innovators including Shazam, GroupMe, Broadcastr and GetGlue.
What’s cable’s biggest opportunity in the next year? With audiences being more socially connected than ever before, it’s our view that the “show” never has to end. With the proliferation of Social TV, Transmedia and screens in general, we have more touchpoints than ever before to richly entertain before, during and after seasons of shows’ traditional airdates.
The biggest challenge with TV Everywhere/Authentication is… Ensuring that the experience is flawless for the viewer and that the power of the network brands’ still shine.
What digital strategy mistake must cable avoid at all costs? Not organizing businesses to support a “listening culture.” Viewers want to engage and be rewarded for their loyalty. Building relationships through social platforms and listening always surface the best ways to serve those needs.
If you could “pin” any 3 photos on Pinterest, what would they be? A French Bulldog, the French Riviera and a Jonathan Adler Addison chair – all things I have my eye on right now…

Plenty of changes inside Washington as the Biden administration gets to work. As expected, President Biden named Democratic commissioner Jessica Rosenworcel as acting chairwoman of the FCC . “I thank the