Internet protocol TV (IPTV) is the flavor du jour, but, like Baskin Robbins ice cream, it comes in several flavors. For cable operators, IPTV can mean transporting content from one headend to another. Cable operators also use IP for their backbones, video-on-demand (VOD) deployments, metropolitan area networks (MANs) and broadcast of video content to distribution hubs via Gigabit Ethernet (GigE). "I’m sure Comcast has more video surrounded by IP headers than anyone out there because our regular VOD network comes of out of servers as IP, goes around regional networks as IP, and is transported to the MPEG-2 transport layer in IP," says David Fellows, Comcast’s executive vice president and chief technology officer. "By the end of the year, we’ll have served up over a billion streams on our video-on-demand network. Where we have launched digital simulcasts, and by the end of the year we’ll be in three-fourths of our systems, all of those channels are carried by IP multicast." Time Warner and IPTV: San Diego While the lines blur on the definition of IPTV (see sidebar for more information), most of the hype lately has come from the Baby Bells’ plan to use IP to deliver video content to the TV set over their fiber and copper networks. IPTV can mean the end device is using IP to receive content without radio frequency (RF) tuners or quadrature amplitude modulation (QAM), or IP can be used to deliver content to a PC or device over the Internet. The multiple definitions breed misunderstanding. "Some people in the more general business press seem to think that IP is a silver bullet where you can leapfrog everything," Time Warner Cable spokesman Mark Harrad says. "It’s simply a standard like anything else." Time Warner Cable has taken a more adventurous approach to IPTV with its trial in two neighborhoods in San Diego. TWC cable launched a trial, using RealNetworks’ technology suite, in early July of "Broadband TV" to 9,000 customers in the San Diego neighborhoods of Mira Mesa and Tierrasanta, both of which have their own nodes but form their own advertising zone. The trial entails delivering TWC’s 75 basic channels to customers’ PCs or laptops by using IP as the last delivery leg into the homes instead of MPEG-2 (Figure 1). 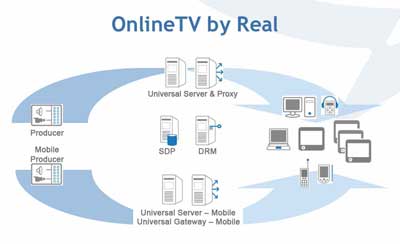 All eyes on Washington this week. Not only is there the threat of a government shutdown, but there’s also the possibility of Biden’s $1 trillion bill being sunk by Progressives who won’t vote for the