Here’s the bad news: According to new numbers from TeleGeography, international Internet capacity growth fell to its lowest point in five years, decreasing from 68 percent in 2008 to 40 percent in 2012. Here’s the good news: While the pace of growth is slowing, international Internet bandwidth continues to grow rapidly, more than doubling between 2010 and 2012 to 77 Tbps. 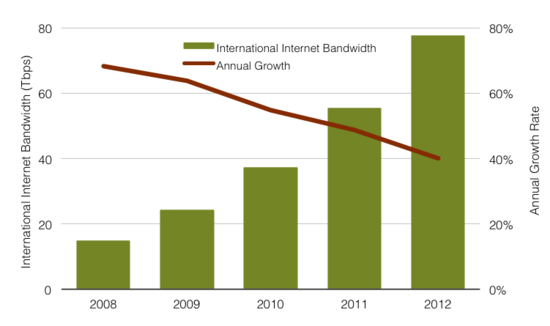 International Internet traffic and capacity growth rates are declining due to a combination of factors, including slowing broadband subscriber growth in mature markets and the expansion of content delivery networks (CDNs) and local caching technologies that reduce the need for new long-haul capacity by storing popular content closer to the end users. “Nevertheless, the underlying drivers of bandwidth demand remain strong.

With the exception of a few developing countries, the days of triple-digit annual growth rates are long past. However, even with the use of CDNs and caching technologies, the compounding effect of rapid traffic growth will continue to require carriers to make considerable investments to expand network capacity.