Most people know Zach McGowan as his somewhat dim but lovably sex-addicted character Jody, who got a lot of screen time during Season 3 of Showtime’s “Shameless.” But these days, the rugged actor plays pirate Charles Vane on Starz’s new historical drama “Black Sails." It’s role that lets him explore myriad gray areas, with McGowan telling us he was attracted to the ambiguity of the character and anything-goes atmosphere of the pirate life (We assume he means on-screen only). We sat down with McGowan for a few minutes to discuss the role—and why he drew inspiration from the animal kingdom to find his rhythm.
So this role seems like quite a departure from the character you played in “Shameless”—although at least you got to keep the long hair.
I think my hair has served me well in the casting process recently, but yeah… it’s a very different part. But it’s such a pleasure… I’m just like a kid in a candy shop.
Well, who doesn’t want to be a pirate, right?
There are very few people from the time you’re 8 years old who don’t want to be one. There might be someone out there, but I don’t know them. Literally, every actor I meet is like “You get to go be a pirate. I hate you. I’m off doing this or that or playing this character I’ve played for a hundred years.” So I’ve been very fortunate. And in the off-season, I got to go off and do Dracula for Universal. I got to a do a Romani-Gypsy accent from the 1400s, which was a lot of fun. 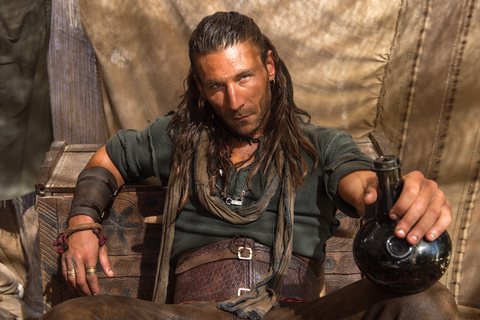 And you pull off a British accent on Black Sails. It has been the year of accents for you.

It has. It has.
Charles Vane seems like a real bad-ass. How do you approach that as an actor?
It’s very fun to play uncompromising people who don’t shy away from a fight, who don’t back down. It’s a pleasure to play and really fun to find that in yourself, to flex those gravitas that you rarely get to flex as an actor.
What’s the secret to playing a character like that. He’s not exactly a villain, but he’s not a really nice guy either. In the first episode, he kills an old man and then punches out a woman in the bar.
And it doesn’t end there. He’ll do a lot more morally questionable things. But I think as you come to understand this world, you start to understand that if you’re not willing to do morally questionable things, you’ve probably been killed at this point. You haven’t made it very long…
How do you make someone like that likeable?
I think it’s amazing what we can forgive in people when we understand their goals and why they do them. As the show unfolds, you get aware of that. The ideas of good and evil, right and wrong, good and bad—all that stuff. We will hopefully be testing that in the audience because that is constantly floated throughout the show. Who you think is good, who you think is bad. The writers do a great job making that ambiguous.
It seems like there are no good guys here. Certainly not the pirates. But not the British Navy either. It was just a chaotic, lawless world.
Well, there’s the famous quote: “There is no black or white, there’s only gray.” When I was younger, I think I was very young and idealistic and looked at the world in black and white. As I’ve become older, I have a family and children, and I see the complexities… You realize that everything is a shade of gray in some ways. Sometimes the greater good does justify a wrong action, and sometimes it doesn’t. All of this stuff is constantly in the news. The whole NSA scandal. Is it better for the population to know everything and vote on everything, or do sometimes can they not be trusted? It’s a very interesting argument…
As we’ve established, Charles Vane is a tough guy. But what do you see as his main vulnerability?
He has a lot of flaws, but his main vulnerability is his heart. Like many people, it’s maybe his heart and his lack of an education. Pirates come from different places. A lot of them were privateers. A lot of them were naval officers and crew members who defected, who were on ships that had been taken over. And some of these people were born into it. At this point, there were people born in the Bahamas and born into this world. This show gets into all the different back stories of all the different characters… I think that will start to show the audience that maybe passing judgment on someone using today’s rules really is not something that applies to this world.
And Vane isn’t fictional. He was a real guy.
Yeah, he’s a historical man. Now there’s a lot written about Charles, but there are almost no primary sources or first-hand accounts of any of this stuff. Almost all of it is second hand accounts or fourth- or fifth-hand. As a writer, I’m sure I don’t have to tell you how problematic that becomes in relying on the information. Also, a lot of this information was fairy tale. It was very good for a pirate to be considered so brutal that when ships saw their flag, they would just give up. There’s a lot of mythology—just like the Wild West.
Can you even use any of that stuff that you’ve read about?
To be honest, most of it was useless to me. I read a lot of it, and I didn’t really find that much that I could actually use in portraying Charles Vane. My best research was really just the animal kingdom. The animal kingdom provided me a lot more useful things that I could do than The Brief History of Pirates or Under the Black Flag.
The animal kingdom? What do you mean?
Just animals. Predators. You gotta remember these are hunters. I use a lot of animal work as an actor. You don’t have to fight for your food, and no one is going to try to kill you if you try to eat this meat, so this world is very different. So while there’s this level of democracy in this world, there’s also this level of jungle rules.
And that’s more useful than reading up on Vane?
You can read a lot about Charles Vane. Charles Vane has a Wikipedia page that says when he was born and how he died. There’s information that I’ve looked at, but it’s contradicted in other sources. There’s not necessarily a really good record of where he was born, who his parents were. There are some things that say he was born in Jamaica. There are some things that say he was born in London. There are some that didn’t even bother to guess because there are no records.
Now we have cellphones and record things. But imagine how easy it was to operate under the radar in this time and do elicit activity. There was no satellite surveillance. This was the frontier. It was the Wild West.
(Michael Grebb is executive editor of CableFAX. You can follow him on Twitter at @michaelgrebb).

Google TV and Android TV users in the U.S. who activate their accounts through the end of the year will receive six months of Peacock Premium for free.