Season 4 of Showtime’s “Shameless” premieres on Jan. 12. And while the show about a struggling and scheming Chicago family continues to be one of the most critically acclaimed on television, it has yet to receive any Emmy love—well, except for fans’ love of its star Emmy Rossum. Over the summer, Rossum and other cast members participated at an event at the Television Academy of Arts & Sciences in North Hollywood to increase awareness. And while the show once again got only one nomination last year (a well-deserved one for Joan Cusack, who didn’t win for the third year in a row), we did catch up with Rossum at for a few minutes to get her take on how the show walks the line between comedy and drama—and why she remains the only Emmy associated with the series.
Some people seem confused about whether this is a comedy or a drama: What say you?
It’s definitely a comedic drama, but I would say drama. Also, I would never play for the laugh. We always play for the reality of the moment. If a laugh comes, that’s fine. It’s usually the heightened stakes and sometimes the ludicrous situations that these people get into, which are quite dramatic, that brings the laugh. And I often find that laughter and crying are just two sides of the same sword. You’re going to release that tension in one way or another. 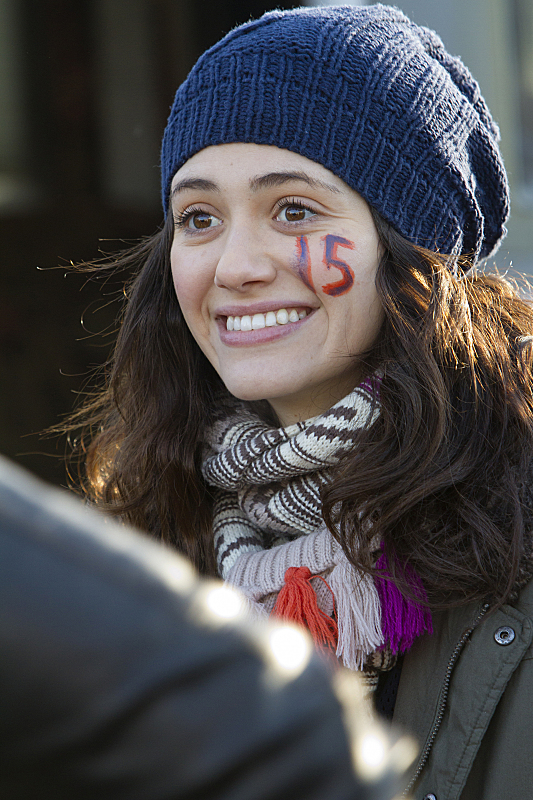 Do you have to approach scenes differently when there’s such a mix of the two?

Yeah, mostly we just poll each other on set. “Was that better? Did that suck?” My motto is always “dare to suck.” Because it’s that moment in which you’re scared to make a fool of yourself that you suck. You have to be unafraid.
The show still has no Emmys, so do you think this kind of event helps with Emmy voters?
We already have one. (Points to herself). Emmy.
Ah, yes. That’s true. But do you think events like this might help attract the smaller, more metallic version?
I guess so. We always want to encourage people to watch the show. I think the show speaks for itself. Also, we’re not one of those shows that people are going to talk about and vote for just because it sounds familiar. You really have to watch the show.
Perhaps the subject matter is too challenging for some voters?
Yeah. It’s a challenging show. It’s in your face. It’s not a show that’s background noise. I watch a lot of shows that are kind of comforting and you don’t have to pay that much attention to. It’s a show that commands your attention. So it’s not always the easiest watch, but we love making it and apparently enough people like seeing it.
So what’s the most shameless thing you’ve ever done in your life?
I made an ex-boyfriend a video of me singing his favorite song to get him back. And it worked.
But it was still shameless.
It was really embarrassing. And I really hope he burned that email. It’s really corny. There’s even a photo montage of pictures of us.
(Michael Grebb is executive editor of CableFAX. You can follow him on Twitter at @michaelgrebb. Read Friday’s Programmer’s Page in CableFAX Daily for more on Shameless’ lack of Emmy love despite its critical acclaim, with more insight  from the rest of the cast).

Discovery tapped Amazon Web Services to support its cloud-based needs for services like discovery+ as it continues its global rollout.