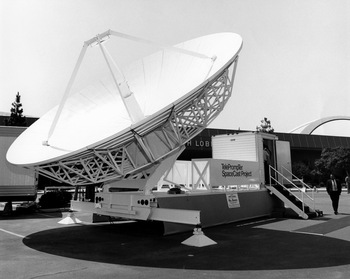 The NCTA Cable Show has always provided a platform for demonstrating innovative technologies, and the show in Anaheim, CA, in 1973 stands out as a game-changer. At that meeting, the introduction of satellite technology would have a profound impact on the cable industry. But more than that, the story is a prime example of cable’s entrepreneurial spirit. TelePrompTer, Scientific-Atlanta, and HBO combined forces and took a risk around an idea that would change the world.

At TelePrompTer, Hub Schafly and Irving Kahn had been talking about satellites replacing microwave technology for delivery of content for years. In late 1972, as the FCC endlessly debated the rules around satellite communications, Schafly moved ahead with an RFP to build a prototype earth station for cable with a $100,000 price tag. Several large companies, including Hughes Aircraft, which owned a large piece of TelePrompTer, did not place a bid because they thought that the price of the RFP was too low.

This was the perfect opportunity for Sidney Topol, the new head of a small company named Scientific-Atlanta. Topol knew that the earth station would cost more than $100,000 to build, but he had the vision and was willing to take a risk that could move S-A forward. Schafly and Topol agreed the system would be ready for demonstration at the NCTA Show in Anaheim in June 1973. Topol and his team built an earth station on the back of a trailer in just a few months and started the journey across country to Anaheim.

Home Box Office (HBO), founded in 1972, was the brainchild of Charles Dolan, but by 1973 Time Life, Inc. had secured control of HBO. The obstacles facing the new start-up were tremendous, and the HBO team faced some very difficult challenges. The service relied on microwave transmissions that were unreliable and expensive, the economic model was untested and opposition from the Hollywood studio system was intense. As the NCTA Show approached, HBO saw an opportunity and agreed to provide a telecast of a boxing match in a hotel room for a small group of interested people.

Everything was in place on June 18, 1973, when a nervous William Bresnan, Chair of the NCTA, opened the show. He introduced the program, and shortly thereafter, the Speaker of the House of Representatives, Carl Albert, arrived directly from Washington D.C. It worked! That evening, HBO featured a boxing match between Jimmy Ellis and Ernie Shavers from Madison Square Garden. Unfortunately, the boxing match lasted less than one round as Shavers delivered an early knockout punch. Many had missed the main event of the evening. The cable industry took its time to ponder what it had seen in Anaheim, but this was the beginning of a new era in cable.

The United States went through a difficult recession during 1973-75, but the new technology was too promising to ignore. Scientific-Atlanta emerged from this period as a key cable vendor, and the price of the satellite system they developed declined dramatically as more cable companies purchased the new system. The economic model featured a higher picture quality at a lower cost of delivery. Topol’s gamble paid dividends not only for Scientific-Atlanta, but also for a cable industry that was struggling at the time.

TelePrompTer was the largest MSO in the United States from 1975 – 1980 with more than one million subscribers. Its financial position improved considerably under the new model, and Westinghouse purchased the operation in the early 1980s.

From a very humbling start at the Anaheim NCTA Show, HBO had proved the technology would work and was the first to develop a new form of entertainment. In addition to the technological leap, HBO also developed an appealing revenue sharing model with the cable operators. This was a win-win for everybody involved. In September 1975, HBO presented the Muhammad Ali vs. Joe Frazier fight directly from Manila in the Philippines, and the age of satellite broadcast had begun. HBO, celebrating its 40th anniversary this year, opened the door for a new era of cable programming that we all know today.