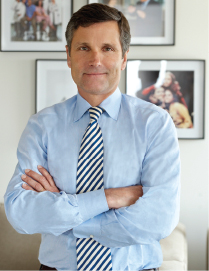 Why Him? Just after the acquisition, new NBCU CEO Burke demonstrated his acumen for innovation with the company’s internal “Project Symphony”—an initiative that unites the teams’ promotional and marketing resources for fledgling projects. Already, it has prompted animated Easter-themed flick “Hop”—which held the No. 1 box office spot in North America for two weeks, scoring 2011’s second-highest opening weekend to date—and NBC’s reality singing competition “The Voice,” a hit in its first season and ready for a curtain call in February. While Burke’s priority this year has been rebuilding flagging fourth-place network NBC, a can-do team surrounding him will keep an eye on its cable properties—for now.
Numbers Game: NBCU cable networks’ 2Q report gave Burke something to smile about. Not only were overall revenue, operating cash flow, ad revenue and distribution all up, but revenue driven largely by licensing of owned content from the cable production studios shot up 44%. Early investments in new programming are also starting to show promise.
Year Ahead: With NBC still down in the dumps, we’re waiting to hear about Burke’s specific plans for NBCU properties Telemundo, USA, Bravo, Oxygen, Syfy, CNBC and the others in its grab bag.

Jeff Murphy joined Charter as svp, corporate finance and development. Murphy previously spent over 20 years at Credit Suisse Group, leaving in May 2020 as vice chairman of the investment banking and capital markets division as well as a managing director in the global TMT group based in New York. — Nexstar promoted James Baronet […]