The Federal Communications Commission recently concluded its spectrum auction (Auction 105) for Citizens Broadband Radio Service (CBRS) spectrum, and raised more than $4.5 billion. While Verizon led the way as the biggest spender ($1.89B for 557 licenses), Charter, Comcast, and Cox were also significant bidders who won many licenses:

So what’s this all about? What are the three largest U.S. MSOs going to use this spectrum for?

Before we go into that, let’s review what CBRS is and how the FCC is mandating its usage.

CBRS is 150 MHz of spectrum in the 3.5 to 3.7 GHz band. The CBRS band was historically used by the U.S. government for such things as military radar and satellite stations, and it will still be using the band as an “incumbent user.” In 2017, the FCC issued rules for shared government and non-government use of the band. Fundamental to the FCC rules is a three-tier authorization structure: 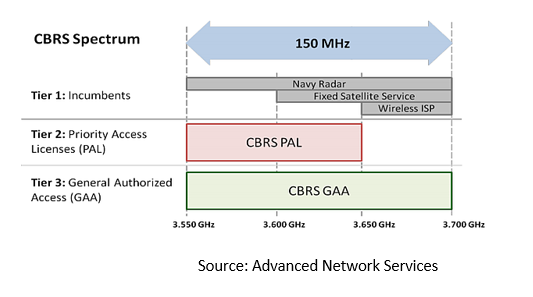 In order to access the band, operators must interoperate with a Spectrum Access System (SAS). In July 2019, NTIA’s Institute for Telecommunication Sciences (ITS) released test reports to CBRS equipment manufacturers and potential operators, which included a wide variety of scenarios to test the SAS’s ability to manage CBRS devices while protecting incumbent operations. Five companies will be hosting the role of SAS administrator: Amdocs, Commscope, Google, Federated Wireless and Sony.

Why is there so much interest in gaining access to the CBRS band? The band is a “sweet spot” for being able to propagate for miles, penetrate buildings, and still carry a significant amount of data. Since 2017, many operators, both LTE/5G and cable, have announced and are conducting trials within the CBRS band, including AT&T, Verizon, and Charter. Trials include testing fundamental RF characteristics, including coverage, throughput, and mobility.

Under longstanding FCC rules, the winners of the auction can’t discuss their plans to use the newly gotten licenses until the “quiet period” ends. However, there are plenty of use cases that can be deployed by cable and cellular operators alike:

Commercial wireless expansion is not all about the CBRS band. The FCC has another auction (Auction 107) scheduled for December, this time for 280 MHz of spectrum in the “C-band”, ranging from 3700 to 3980 MHz. This band is currently used primarily for satellite service, and the FCC is modifying the licenses to clear the band and open it for terrestrial operations. Unlike CBRS, C-band operators will not have to interface to an SAS for access to the band, making it a more straightforward implementation.

Presentations on CBRS and other wireless topics, such as Wi-Fi 6E and Fixed Wireless Access, have been included in the Fall Technical Forum at SCTE•ISBE Cable Tec Expo 2020 Virtual Experience. These workshops are available for streaming by registering for free at expo.scte.org.

Last week, ahead of its voluntary Chapter 11 bankruptcy filing, MobiTV laid off an unspecified number of employees.